Press Box: It was a good week for the Tigers and the Chiefs 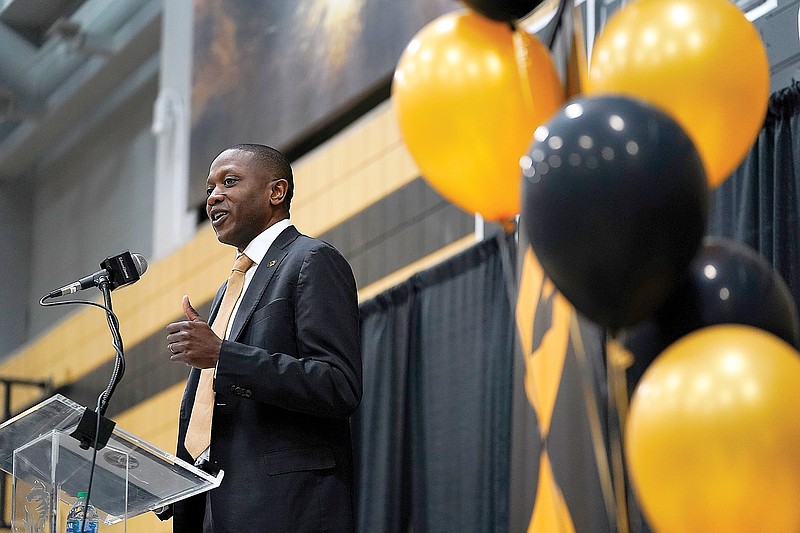 Dennis Gates is introduced Tuesday as the head basketball coach at Missouri in Columbia. (Associated Press)

It was a week for comings and goings.

Gates comes to Missouri after spending three seasons as head coach at Cleveland State. Not going to lie, before his name became linked to the Missouri job last weekend, I had never heard of him. To be fair, I think it’s safe to say he’s never heard of me either.

It’s not the big name many Tiger fans wanted the athletic department to hire. I understand Missouri fans wanted someone who by reputation alone would knock their socks off.

But former Arizona coach Sean Miller wasn’t going to take the job. And Missouri shouldn’t have wanted him after he was booted from Arizona with an NCAA thunderstorm about to hit that program.

Rick Pitino was not going to take the job. He’s 70, he’s coaching at Iona in New York City. At his age, he’s not a CoMo type of guy.

Gregg Marshall, the former Wichita State coach would have taken the job. If it would have been offered, resignations should have been demanded from everyone associated with the decision in the athletic department.

So the search settled on Gates. It’s not beneath Missouri to hire a mid-major coach, I don’t understand the attitude that it should be.

Cleveland State was 40-89 in its four seasons before Gates took the job. In his second season, Cleveland State won the first of its two consecutive Horizon League championships and a berth in the NCAA Tournament. This season, his third at Cleveland State, the Vikings made the NIT and again won the regular-season conference title.

Gates has a six-year contract for $16.5 million guaranteed. He’s got a lot of work to do to earn that money, starting with a roster rebuild.

He’s signed the No. 1 junior college recruit according to jucorecruits.com in 6-foot-11 post player Mohamed Diarra. Reports said Sean East, a 6-3 guard ranked the No. 2 JUCO recruit, was on campus Saturday.

Also on Saturday, DeAndre Gholston, a 6-5 guard who has played the last two seasons at Wisconsin-Milwaukee, announced he is transferring to Missouri. Gates knows Gholston, who averaged 15.3 points per game and shot 34.2 percent on 3-pointers at Milwaukee, from coaching against him in the Horizon League.

I won’t argue with you if you don’t think Gates is a home-run hire for the Tigers. I’m not going to attempt to convince you he’s the coach to lead the Tigers to the top of the SEC. But Gates looks like a coach who can provide a burst of energy to what was a morbid Missouri men’s basketball program the past couple of seasons.

Just give him a chance.

Then there was the bombshell Wednesday when the Chiefs traded wide receiver Tyreek Hill to the Dolphins.

The news was met with a resounding “What they heck are they doing?”

Well, they are making the team better. Maybe not this year, but for years down the road.

With his speed, Hill is a unique weapon in the NFL. But the Chiefs offense has taken some incremental steps back in the past couple of seasons. Defenses have adjusted by playing the Cover 2. taking away a lot of what Hill brought to the table when it came to throwing the deep ball.

Hill signed the richest contract ever for a wide receiver with the Dolphins. He was never going to get anywhere near that amount of money from the Chiefs and he wouldn’t have been happy about it this fall.

In return, Kansas City received five draft picks from Miami. So if you think about it, the Chiefs got potentially the best years from Hill in his career, a fifth-round draft pick, plus a handful of selections to make the team better overall. Sounds like a good deal to me.

And by clearing Hill’s salary for the 2022 season off the books, it allowed the Chiefs cap space to add free agents.

The AFC West is all in on beating the Chiefs this fall. Kansas City may not win the division title for the first time in seven seasons. But looks like the Chiefs are getting positioned to regain control of the division in the not so distant future.