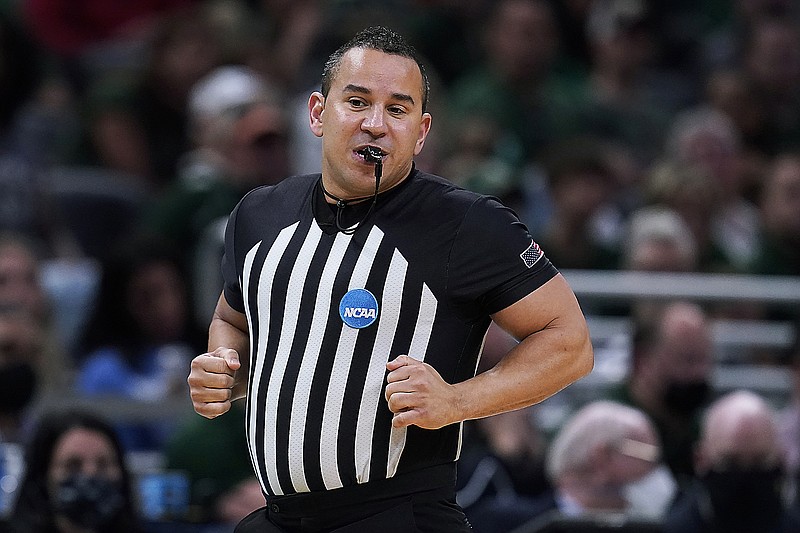 Referee Larry Scirotto runs up court during the second half of Thursday's NCAA Tournament game between Colorado State and Michigan in Indianapolis. (Associated Press)

Another high school basketball season has come and gone.

Before the start of some of the games I attended this season, the public address announcer would read a statement regarding sportsmanship, obviously encouraging it. It’s the same one that has been around for years, from the Missouri State High School Activities Association, reading “this game is competitive, but it is also an educational experience.”

For a few fans, that announcement goes in one ear and out the other.

With each passing year, the abuse basketball officials have to endure seems to be getting worse and worse. There were a few instances this past season that stood out to me.

• In one game I attended, a student section didn’t like a referee’s call, obviously because it went against the students’ team. So, in unison, they began chanting, “I’m blind, I’m deaf, I should’ve been a ref.”

Sure, it rhymes. And sure, this isn’t original, because I bet they copied it from a college student section. But is making fun of an official really the route you want to go here?

• At another game, I saw a fan show up wearing a black and white striped referee’s shirt. I thought that seemed to be an odd wardrobe choice, because that team’s school colors were not black and white. But it didn’t take long to figure out the meaning behind it.

Later in the game, when a referee’s call went against that fan’s team, he proceeded to put on dark shades and stagger along the baseline, pretending to be a “blind” ref.

Seriously, what are we doing here, people?

At first, I was appalled by this behavior. But what’s worse, I was disgusted when I saw nothing was being done to stop it as it was happening. No administrator was intervening. It gives the impression this behavior is acceptable.

Being a high school basketball referee isn’t a full-time job. Sure, it can bring in a nice secondary income for many, but based on the fan behavior I have witnessed, these folks don’t get paid nearly enough.

Several state high school athletic associations are experiencing shortages for referees and umpires. One of the major reasons is because several officials are reaching retirement age. Another reason, not too far behind, is because of the constant abuse they receive from fans during games.

One of the counterarguments are officials need to develop “thicker skin.” But you can only ignore that kind of abuse for so long until it gets to be overwhelming.

I’ll be honest, when I was younger, I would sometimes yell at referees.

But then I filled in as a referee for a fifth- and sixth-grade basketball tournament and realized just how difficult of a job it can be, and experienced a few parents upset at my calls as well.

Needless to say, after that experience, I learned my lesson. No more yelling at officials.

Hey, that gives me an idea.

Picture this: In order to be a basketball fan, you must first referee a youth basketball tournament.

Hear me out, I think this is a win-win situation, because one of two things will happen.

• One, the fan comes to learn he or she can’t handle the abuse -- just wait until you make your first 50/50 call -- and they’ll learn their lesson too and stop whining about the officiating when they return to the wonderful world of fandom.

• Or two, the fan finds out he or she is good at officiating, and thus decides he or she would like to do it more often. If we get enough fans who feel this way, we can help end the referee shortage.

I promise I’m not trying to ruin the fan experience. Go ahead and do your cheers for your school and jeers toward the other school. In fact, it’s a surprise if I attend a Helias basketball game and I don’t hear an opposing student section do the “Daddy’s money!” chant.

But it’s time to leave the officials alone. Their job is difficult enough as it is. They don’t need you turning it into an unbearable experience.