One is Russian, the other Ukrainian. They dance together in Philadelphia Ballet 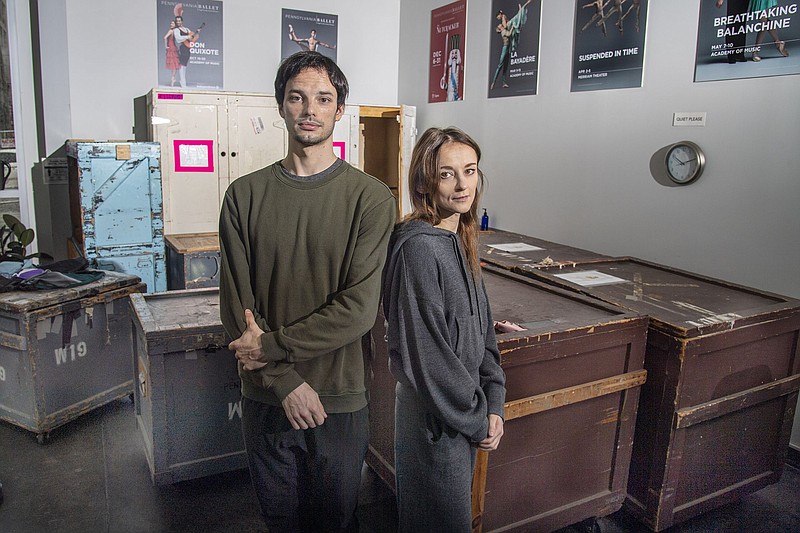 PHILADELPHIA -- As Russian forces were closing in on Kyiv last Thursday, Oksana Maslova, a Philadelphia Ballet dancer from Ukraine, was exchanging text messages with friends and family nearly 5,000 miles away. Her mother, who had gone to Kyiv to be with Maslova's sister, spent the previous two nights in a bomb shelter, and communication had grown sporadic.

At the same time, "Swan Lake," for which the company had been preparing for weeks, was getting its first full run-through. And suddenly, in rehearsal, the echoes between art and real life grew loud and painful for the ballerina.

"Basically the whole story is that I have to ask the Prince to not shoot the swans," said Maslova, who dances the part of Odette in the production, "and I get those parallels in my head. It felt like a nightmare, that I am literally in my gestures asking him to not kill."

More echoes, still, came by way of the dancer cast as Von Rothbart, whose curse turns Odette into a swan during the day and returns her to her human form at night.

"Of course, I am the evil wizard -- who's a Russian, too," Moscow-born Aleksey Babayev said.

The two appear in the roles twice during Philadelphia Ballet's production of "Swan Lake" opening this week -- in the March 5 and 13 performances -- at the Academy of Music.

Off stage, Maslova and Babayev are friends. They've danced together before, just last month in Alba Castillo's "The Persistence of Memory." Their families get together for birthdays and holidays. And on a recent morning, as the reality of the invasion set in, they reflected on the fact that as all-consuming as their art form is, art cannot always succeed in offering a refuge from real life.

"Most of the time, yes. But now when it gets to this point, no," Maslova said in a conversation at the ballet's North Broad Street studios as the eerie sounds of Danse Macabre seeped in from a morning dance class.

Philadelphia Ballet, like other major troupes, draws talent internationally, with members from Japan, China, Brazil, Cuba, South Korea, Spain, the U.K. and the U.S. -- as well as Philadelphia, Wyncote and Jenkintown.

Maslova, from Nikopol, on the Dnieper River, joined the company in 2014 as soloist and was promoted to principal dancer in 2016. Babayev left Moscow at 11 months old, and has since had one foot in the West and the other in Russia. He was raised in Richmond, Virginia, and Drexel Hill, accepted into Philadelphia Ballet's PBII program in 2008, and moved back to Russia at age 19 to join the Stanislavsky Ballet. He returned to the Philadelphia company's corps de ballet in 2016 before becoming a soloist.

He has no immediate family in Russia, but does have friends in the region. The international ballet network is tight, both said, so they monitor the social media feeds of friends showing ground-level assaults in Ukraine.

These kinds of real-time dispatches handily contradict the Russian government's campaign of misinformation, they said.

"This morning I saw a tank went completely over a peaceful car," Maslova said. "Someone filmed it from a window on the street close to where I was living when I was in Kyiv, so I know the street. People say it's fake. I said, 'No, I know those streets. It's not fake.'

"Many Russians don't believe it happened, they don't know what happened because the news they get is completely different," she said. "They lie to their own people."

Her Russian friends, though, do see clearly what's happening, she said, and they are standing with Ukraine. Friends from Moscow tell her that the attack on her country "is not normal in the 21st century after all we've done together in the Second World War, and they apologize and are very ashamed for the Russians. I say, 'It's not your fault.'"

"I have friends in Russia, they're a little bit in shock right now," Babayev said. "They also didn't think this was going to happen because Ukrainians and Russians -- they're the same people. It's like fighting a war with our own people. It makes no sense to me."

Babayev said he feels like he's living in two worlds.

"I don't want to hear that a random missile hit my friends. I'm trying to work, trying to pay attention, trying to have notifications on my phone and trying not to look at my phone."

The Russian invasion is, he said, "like a bad shadow. It's always there in the back of your mind."

Artists often speak of the power of art to change the world. But that's not what this moment calls for, Maslova said.

"The art can help people to be more kind, more thoughtful, the art could change the way you act as a person. But the art cannot save my mom from the bomb that is falling right now. I was thinking, 'How can I help?' I cannot. The art cannot help in this way now."

Now, she said, the responsibility rests with all of humanity.

"My hope is that the world will react stronger to what's going on," Maslova said. "It's not just a simple demonstration with someone protecting their rights. It's a bigger thing. For me, the world needs to wake up quicker."

Print Headline: One is Russian, the other Ukrainian. They dance together in Philadelphia Ballet