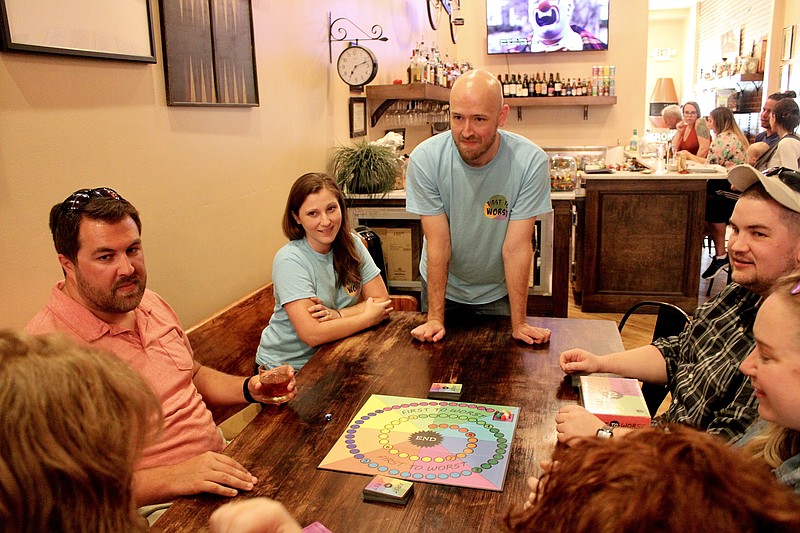 Clayton Toebben, center, walks players through his board game "First to Worst" at Cork & Board during its first "Meet the Gamemaker" event on June 22, 2022. (News Tribune/Cameron Gerber)

It's not every day you get to hear the maker of a board game walk you through its creation and rules, but those gathering Wednesday evening at Cork & Board got that opportunity.

The gathering was the first of Cork & Board's "Meet the Gamemaker" events, which give attendees the opportunity to meet the creators of board games.

The first event highlighted "First To Worst," a game created by local game maker Clayton Toebben, of ZQM Games. The game, which launched in 2020, sees players using their skills -- and a little bit of luck -- to keep their pawn from reaching the end of the board while forcing their opponents into the final spot, a kind of backward race to the finish. The game makes use of a game board, dice, stackable pawns and a deck of special cards.

Toebben said the variety of the cards, in addition to a mechanic that sees pieces stack on top of one another and move together, created a unique experience in every game.

Toebben said board games had been a longtime passion of his, and several years of brainstorming and play testing finally led to "First to Worst," his first published game.

"I've always really liked making games. I had friends come over and that was just something I did -- I would always want to make games more fun or move faster when playing with friends, and that's translated into me making my own game," Toebben said. "I don't really do it for money; I just like to see people have fun."

Throughout the event, he explained the rules of the game, answered questions from a full table of attendees and joined them for a few rounds.

One of the attendees, Ben Cook, said he had played the game at Cork & Board before and came out to enjoy an evening of fun and games with Toebben and other fans.

"I had heard that he was going to be here and I wanted to talk to him about how he came up with such an innovative game that isn't like anything else out there," he said. "It's interactive, and every turn you're doing something. You're not just waiting for something to happen."

The Cork & Board team hopes to hold further events in the near future, co-owner Cara Alexander Stark said. "First to Worst" is among the game-based bar and cafe's most popular offerings, she said. Coupled with the fact it was created by a local, it was the perfect choice for the first-of-its-kind event at the popular downtown spot.

"We've been trying to do more community-based events like this. We got this game a few months after we transformed the bar, and it's been one of our most popular," she said. "A lot of people don't even realize it's Missouri-made; they just pick it up and have a lot of fun, and it made us want to bring Clayton in for this.

"Our goal with these events is to bring in as many Missouri-made games and game makers, because there's a huge community for it," she continued.

Next week will see another first for the team with their first Open Play event, where they will teach attendees how to play Dominion, a deck-building card game, before participants pair up to play a few rounds. That event is set for 7 p.m. June 29.

You can learn more about "First to Worst" at zqmgames.com.