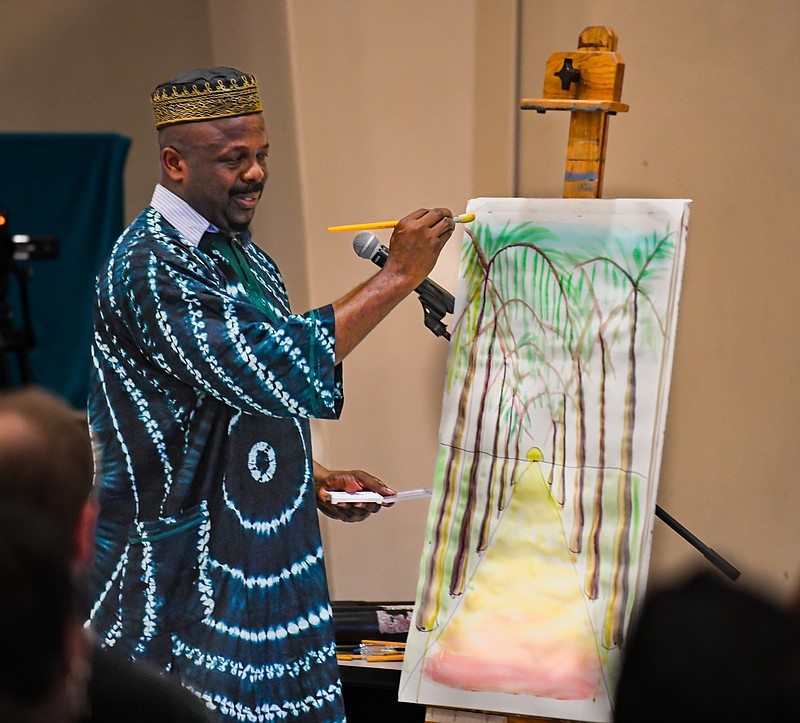 Nigerian artist Ibiyinka olufemi alao visited Jefferson City Correctional Center Wednesday, June 15, 2022, to talk to offenders about using art as an outlet and as a way to convey feelings. He said some people can make music or write songs and artists can draw or paint to express their emotions. Following his speech, he demonstrated how to make a watercolor painting in step-by-step detail. (Julie Smith/News Tribune photo)

Ibiyinka Alao led nearly 100 offenders from JCCC in an art therapy workshop, focusing on messages of humanity, forgiveness and community.

Alao, known for his use of vibrant colors, became Nigeria's art ambassador after winning the United Nations International Art Competition. He's one of five artists Global Citizen has recognized for spreading peace around the world, joining the likes of John Lennon, Michael Franti, Alicia Keys and El Seed.

Alao began with a talk titled "Art and the Advancement of Africa: Pushing Boundaries and Innovating Ideas to Build Africa Through the Arts," in which he reviewed original artwork and shared the life lessons that influenced them.

He began selling art at a young age and was encouraged by the reception he was getting. Regularly selling paintings from the ages of 7-17, he said it built his confidence as customers began asking for his work by name.

Then Alao learned his father, a community leader in Nigeria, was paying prisoners to buy his art.

"Isn't that crazy?" he asked with a laugh.

It was an elaborate scheme to support and encourage him, Alao said. Love and encouragement can't always be seen, he explained, but they help shape who we are.

Warden Doris Falkenrath said the event was particularly valuable for JCCC because it prides itself on the artwork offenders produce daily.

"We try to get as many people from the outside to come in and visit our facilities to kind of bring some inspiration to the guys who are incarcerated," she said.

JCCC is a maximum and medium security prison with some offenders serving life sentences without parole, meaning they don't have a date they'll be released.

Without goals or something to work on, Falkenrath said, they can lose hope.

"This gives them the hope to keep doing what they're doing and to maybe help those people in the community with their projects," she said. "It's all about giving people hope, giving them goals and giving them something to look forward to on a day-to-day basis."

Changes are often gradual, Falkenrath said, so offenders may arrive at JCCC feeling hopeless but change their attitude after getting more involved in programs of interest. Fresh perspectives from visitors can create a better atmosphere, spark offender interests and help further an offender's progress, she said.

Alao's artwork is influenced by a number of factors, such as the vibrancy and life of Nigeria, his Christian faith and the warmth of his home country. Art is a form of story-telling, Alao said. He likes to add mystery to his art so viewers spend more time with it.

As a world traveler, Alao said he's experienced internal beauty in people from of all backgrounds and cultures.

Art is an expression of humanity and portraits are portrayals of a person's character, not necessarily their physical appearance, Alao said, as he showcased his self-portrait.

"Whether it's an ugly part or it's a beautiful part, these things don't matter if we tell our stories at the end," he said.

Ahmed Anderson, a JCCC offender from Kansas City, said Alao's visit to the prison taught him to appreciate the art in everything.

"The question for me is finding the art in life," he said. "That way I can really give more to life, especially being on this side in prison. It becomes motivation when people come from outside. We get inspiration from something like this."

After sharing his philosophy and approach to art, Alao led the audience in an art therapy exercise.

Art doesn't have to be perfect because stories aren't perfect, Alao said, and confidence has to come from your own perspective.

Alao has a pet monkey in Nigeria that likes to paint.

"He doesn't really care, like he thinks of himself as a great artist, and I think he's right because who am I to judge his work?" Alao said. "I don't have monkey eyes, I don't have monkey experience, so maybe, in the monkey world, my monkey is like monkey Michelangelo or something like that."

The workshop was open to offenders participating in Restorative Justice programs, initiatives aimed at equipping offenders with practical skills while giving back to communities in Missouri.

Juan Beleon, an offender from Kansas City who works in the recreation area, said he went to the event because he's interested in art.

Beleon said he's mostly interested in drawing cars, skulls and anything else in the Chicano art style.

Beleon had never heard of Alao but said he wished there was more Hispanic representation in the visitors DOC brings to prisons. 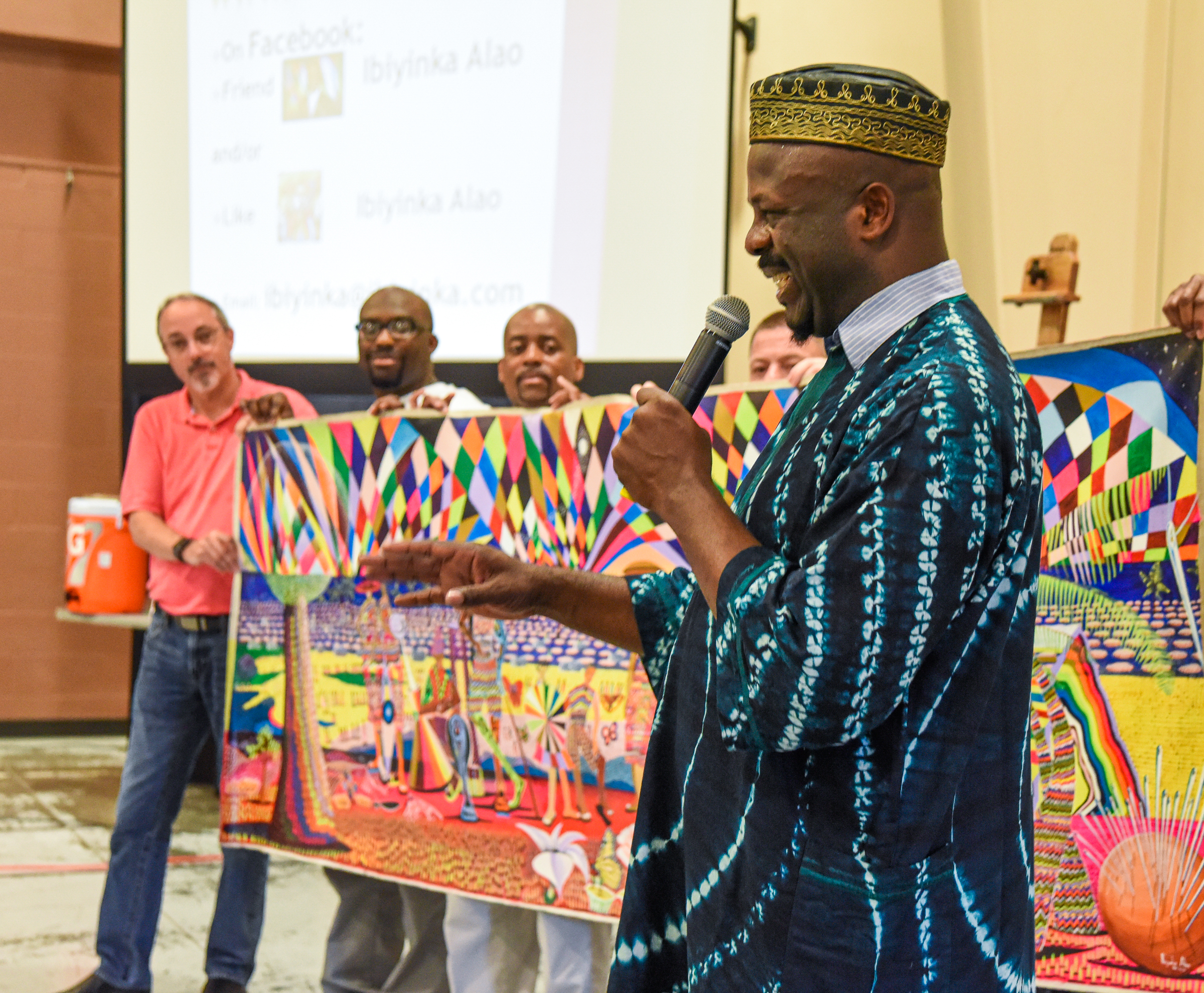 Julie Smith/News Tribune photo: Nigerian artist Ibiyinka Alao visited Jefferson City Correctional Center Wednesday, June 15, 2022, to talk to offenders about using art as an outlet and as a way to convey feelings. While there, he unrolled one of his colorful pieces of art work, shown here.