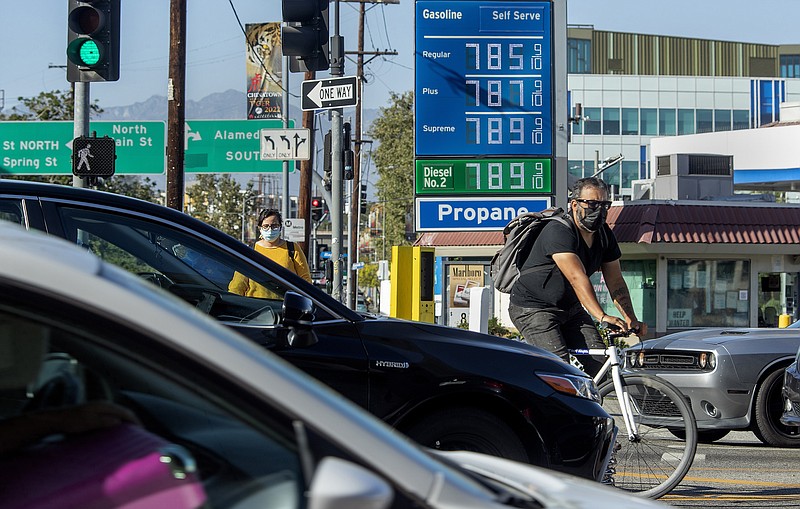 A bicycle rider maneuvers around motorists stuck in traffic on Cesar E. Chavez Avenue, at the intersection of Alameda Street, in downtown Los Angeles, where the price of gasoline approaches close to $8 a gallon at the Chevron gas station, June 1, 2022. (Mel Melcon/Los Angeles Times/TNS)

At the gas station near my home in Burbank, California, gas prices last week were an astronomical $6.50 per gallon, much higher than the nationwide average of $4.67, and just above the statewide average of $6.19 per gallon. Filling up the tank can cost a shocking $100. Working families cannot afford this, and it doesn't have to be this way.

The reasons for high gas prices are many and intertwined. Our economy's rapid recovery from COVID-19 has led to a surge in demand, as people resume their pre-pandemic lives. Meanwhile, some in the oil industry are struggling to keep pace after shuttering older and less profitable refineries across the country when the pandemic first hit.

These factors became even more apparent in per-gallon prices as we entered the peak driving season last weekend and companies began switching over to their costlier summer fuel blends. And of course, Vladimir Putin's brutal invasion of Ukraine prompted many countries to boycott Russian oil imports, further reducing global supply.

But this is not the full explanation for the astronomical numbers you're facing at the pump. To figure out the rest of the equation, you need only glance at the balance sheets of the world's five biggest oil companies -- Shell, Chevron, Exxon Mobil, ConocoPhillips and BP. Oil companies are charging consumers sky-high prices at the pump -- far more than necessitated by their costs -- because they can. Basically, they view the crisis as an opportunity to grab even bigger profits.

Nor are the oil companies using these profits to expand production to meet the surging demand of people returning to work and their daily lives. Instead, the corporations are spending the cash on large dividends for shareholders and tens of billions of dollars in stock buybacks for their investors.

It is unconscionable that this industry is taking advantage of the fallout from the horrible war and adding to people's economic pain. Workers and families need immediate relief.

Some people have proposed we suspend the federal gas tax -- about 18.4 cents per gallon -- as a way of alleviating some of the pain at the pump. I support that idea, but there are a couple things we need to keep in mind. First, if we do away with the federal gas tax, oil companies will simply raise their prices and pocket the amount that would have been paid as tax. And that won't help consumers at all.

And second, the federal gas tax provides the resources for the Highway Trust Fund, which finances the construction and maintenance of roads, highways, bridges and public transit systems nationwide. Every commuter in Los Angeles can name a traffic chokepoint or other much-needed improvements they would like to see fixed. We don't want to delay any of those projects by taking their funding away, especially if the oil companies are going to keep their prices high regardless of what we do with the gas tax.

That's why I introduced the Federal Gas Tax Suspension and Windfall Profits Tax Act, to address both of these issues at once.

The bill would suspend the federal gas tax through the end of 2023, which would provide some immediate relief at the pump. To prevent the oil companies from jacking up their prices further, the bill would also impose a new 50 percent tax on income that is in excess of their reasonably inflated average profit. This windfall profits tax would be used to fund highway and mass transit projects while the gas tax is suspended.

This is not a complete solution, but it's a start. Oil companies could still choose to increase profits even with the disincentive of losing half of that income. That's why the anti-price-gouging legislation the House passed last month, which would empower the Federal Trade Commission to crack down on such abusive practices and punish bad actors, is so important.

To get us through the dire impacts of inflation, we need price relief at the pump right away. The combination of a holiday from the gas tax and a windfall profits tax on the oil companies could help.

But at the end of the day, we will remain at the mercy of the oil industry, petro-monarchies and Russian dictators unless we wean ourselves off fossil fuels. Over the longer term, we will destroy our planet if we continue on the present course.

We need to build a green new economy that phases out our reliance on petroleum and dramatically expands the use of renewable sources of energy. Otherwise, future generations will literally pay the price.

Adam B. Schiff, a Democrat, represents California's 28th Congressional District and is chairman of the House Permanent Select Committee on Intelligence.