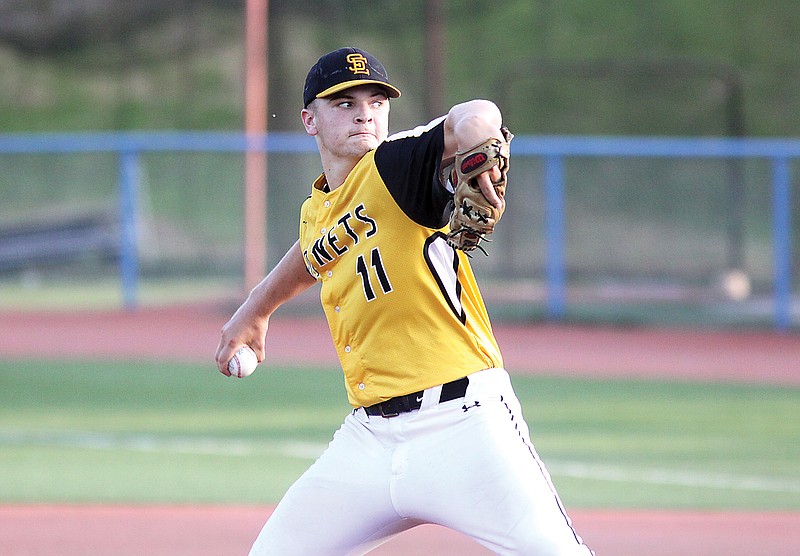 St. Elizabeth pitcher Brock Lucas reaches back before throwing the ball to the plate during Tuesday’s Class 1 state championship game against Oran at U.S. Ballpark in Ozark. (Greg Jackson/News Tribune)

OZARK -- During the 2021-22 school year, there were 110 Class 1 boys basketball teams and 101 Class 1 baseball teams. Obviously, only four teams in each sport can make the Final Four, meaning more than 95 percent of Class 1 athletes in those sports had their seasons end before the Final Four.

St. Elizabeth senior Brock Lucas was part of the less than 5 percent that made the Final Four this season, and in both sports.

“I love coming out here and competing to win,” Lucas said.

But it doesn’t stop there.

Yes, he reached the Final Four every … single … time.

“I’ve been living in the moment now, but I feel like a couple weeks down the road, I’ll look back on it and be pretty proud of myself,” Lucas said.

St. Elizabeth coach Caleb Heckemeyer has been around for all seven Final Fours, too, with five as a head coach and two as an assistant coach.

“To even get there once or twice is a challenge,” Heckemeyer said. “But to get there all seven chances that he had? It’s incredible.”

And some of the Final Four games have been nail-biters.

Lucas was a starting shortstop as a freshman for the St. Elizabeth baseball team, but in the 2019 state championship game, he was called on the make the save on the mound in the seventh inning against La Plata.

After loading the bases with no outs, Lucas turned a 1-2-3 double play, then got a strikeout to finish off the Hornets’ state title win.

“Playing as a freshman gave me that experience, that knowledge of what to do in what situations,” Lucas said.

But Lucas and the Hornets wouldn’t get the chance to repeat as state champions. In April 2020, it was announced the baseball state championships were being canceled due to the COVID-19 pandemic, robbing Lucas a chance of reaching an eighth Final Four in his career.

“That still sits with those seniors to this day,” Lucas said. “We were ready to defend (the title) that year. We had a sharp team.”

Still, that’s the only blemish on Lucas’ high school resume.

In Lucas’ four basketball seasons, St. Elizabeth was a state runner-up in 2020 -- right at the start of the pandemic -- and took third place in the state the other three seasons.

In baseball, the Hornets took second place last season and claimed another state title Tuesday night, winning 9-2 against Oran, the team that had beaten them the previous season.

“Every year, the nerves got less and less,” Lucas said, “to the point where there were no nerves. Then I could just go out and play my game, play loose and just have fun.”

Lucas capped his basketball career with a dominant performance, scoring the first eight points in overtime to lead St. Elizabeth to a 50-45 win against Wellsville-Middletown in the third-place game.

He finished his basketball career with 1,674 points.

“When it came down to crunch time and we needed to score, he just took over,” Heckemeyer said. “He did it in a lot of games all career long. When we needed baskets, he made sure that he was either helping guys get set up or he was hitting the shot for us.”

Then came his final baseball season.

Lucas, who signed with the Missouri baseball team in November, entered the spring baseball season with zero career losses at St. Elizabeth, in fall and spring seasons combined. With a loaded schedule for a Class 1 program, Lucas had two losses on the mound this spring to Fatima and Battle.

“For him to go three-and-a-half years in baseball and only lose two games, pitching against the teams he faced, it’s remarkable,” Heckmeyer said.

But when it came postseason time, Lucas wouldn’t lose again.

He pitched Tuesday’s state championship game, striking out 11 batters in 6⅓ innings. When he reached his pitch-count limit in the seventh inning, he handed the ball off to freshman Gavin Williams to close the win.

He immediately had a flashback to 2019, when he was handed the ball as a freshman to close the title game.

“It definitely crossed my mind, whenever I got pulled, that Gavin, the freshman, was coming in,” Lucas said. “I hope he can use that experience to his advantage, and maybe when he gets to be my age, he can pass the torch down.”

Two outs later, Lucas capped his high school career with a dogpile on the field.

“That’s what I was looking forward to,” he said.

Each Final Four team at St. Elizabeth gets to hang a banner in the gym. When Lucas was a little kid, he said he always dreamed of getting to see his name on the gym wall.

When he returns to his alma mater, he’ll get to see his name on the wall. Seven times, to be exact.

“It’s probably going to be a while before we see another Brock Lucas,” Heckemeyer said. “… I’m going to miss everything about him.”

Jace Kesel, who was a junior this season, has been to a total of six Final Fours. He has been to five of them with Lucas: three with the basketball team and two with the baseball team. He also helped the St. Elizabeth scholar bowl team to a Class 1 state championship May 6 in Columbia, his first of two state titles during the month.

And Kesel still has one year left until he graduates.

“I feel like I can (catch him),” Kesel said with a laugh. “We have a good chance in all three to go back (to the Final Four), bringing a majority of the team back.”