James E. Rieger was instrumental in the establishment and training of a National Guard company in Kirksville. He was lauded a hero in World War I after leading a charge to capture a critical hill during the Meuse-Argonne Offensive. (Courtesy of Museum of Missouri Military History)

While serving on the front lines in France during World War I, Lt. Col. James Rieger might have avoided direct threats to his safety by ordering subordinates to perform dangerous tasks.

Yet this dedicated officer, who spent years of his own time training a group of National Guardsmen in Kirksville, led his soldiers from the front, thus earning him the unwavering respect of his troops and the second highest combat award.

Born in Peoria, Illinois, in 1874, Rieger was but 6 years old when his family moved to Missouri. They established their new home on a small farm near Kirksville, and it was there a young Rieger embraced the pursuit of educational opportunities while also being instilled with a rural work ethic.

"James E Rieger began his education in the public schools of Peoria, continuing the same in the county schools of Adair County ... and in the State Normal School," wrote Walter Barlow Stevens in Volume 3 of his historical compilation "Missouri the Center State: 1821-1915."

He added, "He then entered the University of Missouri at Columbia, from which he was graduated with the degree of L.L.B in 1897. When he was nineteen years of age, he began to assist his father with the work on the farm during his summer vacations, attending the State Normal School and later the university during the winter sessions."

While attending the university in Columbia, Rieger took classes in tactics and developed an unabated interest in military affairs. Following his graduation, he returned to Kirksville to practice law and served two years as the county's prosecuting attorney. In 1901, he married his fiancée, Alma Wray. The couple were devout Baptists, actively serving in their local congregation.

His commitment to his wife and career as an attorney was paralleled by his interest in all things military, eventually resulting in his enlistment as a private and working his way up to captain of Company C, 4th Infantry Regiment of the Missouri National Guard.

Through his leadership, evenings spent in uncompensated training and the dedication of the soldiers under his command, his company acquired the reputation of being one the most efficient in the state.

Edgar White described Rieger in the June 13, 1919, edition of Christian Advocate as a country lawyer who "in the trial of cases ... was gentle, good-natured, always deferring to the other side with courtesy. For years he had command of a company of the National Guard ... and it was notable that while other companies sometimes got tired and lost interest, (his) men were always enthusiastic, always ready."

In Volume II of the "Centennial History of Missouri: 1820-1921," Walter Stevens wrote of Rieger, "When friends intimated that Captain Rieger might be giving too much time to the military, the reply would be, 'I'll study law all right, but I've got to be ready for war.'"

In 1916, Rieger joined the regiment as they were mobilized at Camp Clark in Nevada, Missouri, for service in the Mexican border campaign. The Fourth regiment arrived in Laredo, Texas, on July 6, 1916, establishing its headquarters on the Rio Grande.

"The regiment engaged in field maneuvers and ... a system of patrol of the river," explained the Missouri National Guard annual from 1939. "The guard duty was so efficient that it won the praise of not only General Harvey C. Clark, commanding the National Guard of Missouri, but also that of the Commanding General of the Regular Army..."

Rieger returned to Kirksville with the soldiers of Company C in February 1917, only to be drafted into federal service for World War I on Aug. 5, 1917, along with the entire National Guard. His service card notes he trained with the 137th Infantry Regiment but was later transferred to the 139th Infantry Regiment.

In the book "Thunder of the Argonne," Douglas Mastriano wrote that "Major James E. Rieger would be lauded in France and the United States as the 'Hero of the Argonne' for the series of heroic feats he accomplished during the first three days of the Meuse-Argonne Offensive."

He added, "As a result, (Rieger) was promoted to lieutenant colonel, given command of the 138th Regiment, and awarded the Distinguished Service Cross, the Purple Heart and the French Croix de Guerre."

Rieger caught the ire of a regular Army brigadier general who neither liked National Guard officers nor appreciated the Christian faith demonstrated by his subordinate. But after Rieger placed himself in front of his men at Charpentry, France, on Sept. 27, 1918, and led the capture of a critical hill, he was lauded a hero.

When the war ended, Rieger remained briefly in France as the head of a training school before returning to his wife, two sons and daughter in Kirksville. His pursuit of a career as an attorney did not diminish his spirit of public service; the former soldier also served briefly as city clerk for Kirksville and as a member of the local school board.

In 1938, Rieger was appointed by Gov. Lloyd Stark to serve on a special commission for inspection of monuments and graves of Missouri's war dead from World War I.

The legacy of the renowned soldier carries forth with the Colonel James E. Rieger Armory, which was dedicated in Kirksville in 1942. The 80-year-old WWI veteran died on July 30, 1951, and was laid to rest in Highland Park Cemetery in the town that had become his home.

In 1919, when interviewed by the Christian Advocate, Rieger maintained his service in World War I, though replete with unprecedented dangers, became bearable through the assistance of his abiding Christian faith.

"I did not know if I was brave or not," Rieger said. "In my boyhood days, I had read of battles in field and forest. And I had wondered how men could stand so intrepidly in the presence of death."

He added, "The divine hand shielded me."

On Sept. 9, 2022, Col. James E Rieger will be inducted into the Missouri National Guard Hall of Fame at Kirksville. For more information, please visit www.monghf.org. 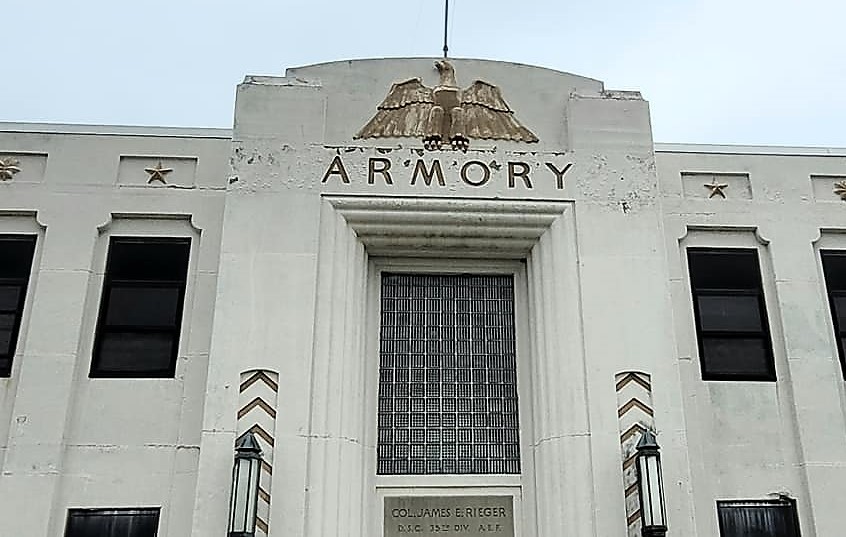 On Sept. 9, 2022, the late James E. Rieger will be inducted into the Missouri National Guard Hall of Fame in the armory that bears his name. (Photo courtesy of Jeremy Amick)

Print Headline: World War I hero to be inducted into Missouri National Guard Hall of Fame