‘Long 3 years’: Trial to start in deaths of 7 motorcyclists 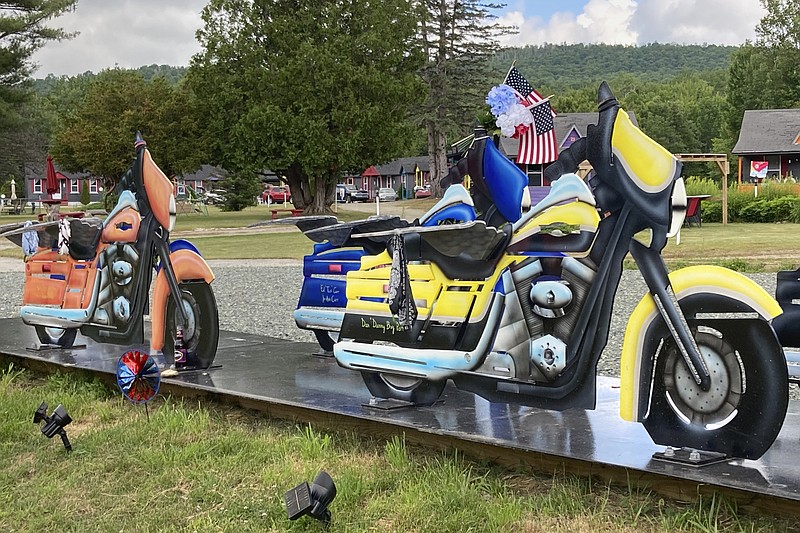 Motorcycle likenesses, part of a memorial to honor members of the Jarheads Motorcycle Club killed in a nearby crash, are visible July 13, 2022, on the roadside in Randolph, N.H. Volodymyr Zhukovskyy, of West Springfield, Mass., is scheduled to face trial on July 26, 2022, on multiple counts of negligent homicide, manslaughter, driving under the influence and reckless conduct stemming from the crash that killed seven motorcyclists that happened in Randolph on June 21, 2019. (AP Photo/Kathy McCormick)

RANDOLPH, N.H. (AP) -- The trial for a commercial truck driver charged with negligent homicide in the deaths of seven motorcycle club members in New Hampshire is set to start more than three years after the 2019 crash that devastated the region's close-knit biker community and exposed flaws in state driver record keeping.

Volodymr Zhukovskyy, 26, of West Springfield, Massachusetts, pleaded not guilty to multiple counts of negligent homicide, manslaughter, reckless conduct and driving under the influence in the June 21, 2019, crash. He has been in jail since then.

The jury was selected this week and is scheduled to visit the crash scene Monday along a busy two-lane highway in northern New Hampshire. The trial, delayed because of the pandemic and defense problems with finding a crash reconstruction expert, is expected to begin Tuesday and last for several weeks.

"It's been a long, long, long three years," said Manny Ribeiro of the Jarheads Motorcycle Club, made up of Marine Corps veterans and their spouses. "We all feel the same way. We all just want it to be over with."

Ribeiro, who was riding with the group that day, said he's among those "that are pretty messed up, still," from the experience.

The motorcyclists who died were part of a larger group that had just left a motel that evening and were headed to an American Legion Post in northern New Hampshire to set up for an annual meeting.

They were traveling east on U.S. Route 2 in Randolph when the westbound truck and empty flatbed trailer in tow collided with the group. In addition to the deaths, several bikers were injured.

Prosecutors are expected to focus on Zhukovskyy's drug use at the time of the crash.

Federal investigators said Zhukovskyy, who was returning from delivering vehicles for a Massachusetts transport company, regularly used drugs. After the crash, Zhukovskyy told police he had used both heroin and cocaine that morning, but he felt "fine and OK to drive" later that day.

His lawyers, who declined to issue any pretrial statements, are expected to shift the blame to the bikers.

They have argued an independent analysis from March 2020 showed one of the motorcyclists who died was drunk and was the one who hit the truck and caused the crash. Federal investigators found some of the bikers and passengers were impaired by alcohol, but that it wasn't the reason for the crash.

The National Transportation Safety Board approved a report in December 2020 that concluded Zhukovskyy's impairment from the drugs was the "probable cause" for him crossing the center line on the highway and sparking the fiery crash.

Zhukovskyy's lawyers unsuccessfully tried to get him a bail hearing so he could be released from jail pending his trial. The state Supreme Court denied the request.

"We are not convinced by the defendant's argument that the fact that he has been sober while in pretrial detention raises 'an important doubt' about whether he is currently dangerous," the court wrote.

Prosecutors said Zhukovskyy should never have been on the road in the first place. His commercial driving license should have been revoked in Massachusetts because of a drunken driving arrest in Connecticut about two months earlier.

Connecticut officials alerted the Massachusetts Registry of Motor Vehicles, but Zhukovkskyy's license wasn't suspended because of a backlog in out-of-state notifications about driving offenses. An audit also found an employee briefly reviewed the notification from Connecticut but did not change Zhukovskyy's record because the worker wasn't trained to do so and didn't bring the case to anyone else's attention.

In its review, the NTSB found similar backlog problems were in Rhode Island, New Hampshire and at least six other jurisdictions.

In Massachusetts, the head of the registry resigned days after the crash. Another manager who stopped processing alerts from other states about Massachusetts drivers who had broken traffic laws was fired.

Massachusetts officials said out-of-state notifications are now being processed on the day they were received or the following day. Massachusetts Gov. Charlie Baker filed legislation aimed at toughening regulations for commercial drivers. That bill is pending in the Legislature.

Federal records show that the company Zhukovskyy was driving for, Westfield Transport, faced multiple violations for unsafe driving. The company is now disbanded and the two brothers who ran it were accused of falsifying records. They pleaded not guilty and their cases are pending in federal court.

Since the crash, the Jarheads have held charity motorcycle runs for family of the "Fallen Seven." The first one in July 2019 drew more than 3,000 bikers, some from as far away as California and Florida, for a 90-mile tribute trip from Laconia to the crash site, where a memorial and a color guard stood.

Those killed include four people from New Hampshire: Michael Ferazzi, 62, of Contoocook; Albert Mazza Jr., 59, of Lee; Desma Oakes, 42, of Concord; and Aaron Perry, 45, of Farmington. The remaining three victims were Daniel Pereira, 58, of Riverside, Rhode Island, and Jo-Ann and Edward Corr, both 58, of Lakeville, Massachusetts.

Today, another memorial near U.S. 2 depicts five steel silhouettes of rider-less motorcycles with a set of wings for each of the seven riders. Visitors have attached American flags, bandanas and flowers to the bikes.

The names of the dead are engraved on the motorcycles and on a granite monument off to the side, along with the words, "Never Forget." 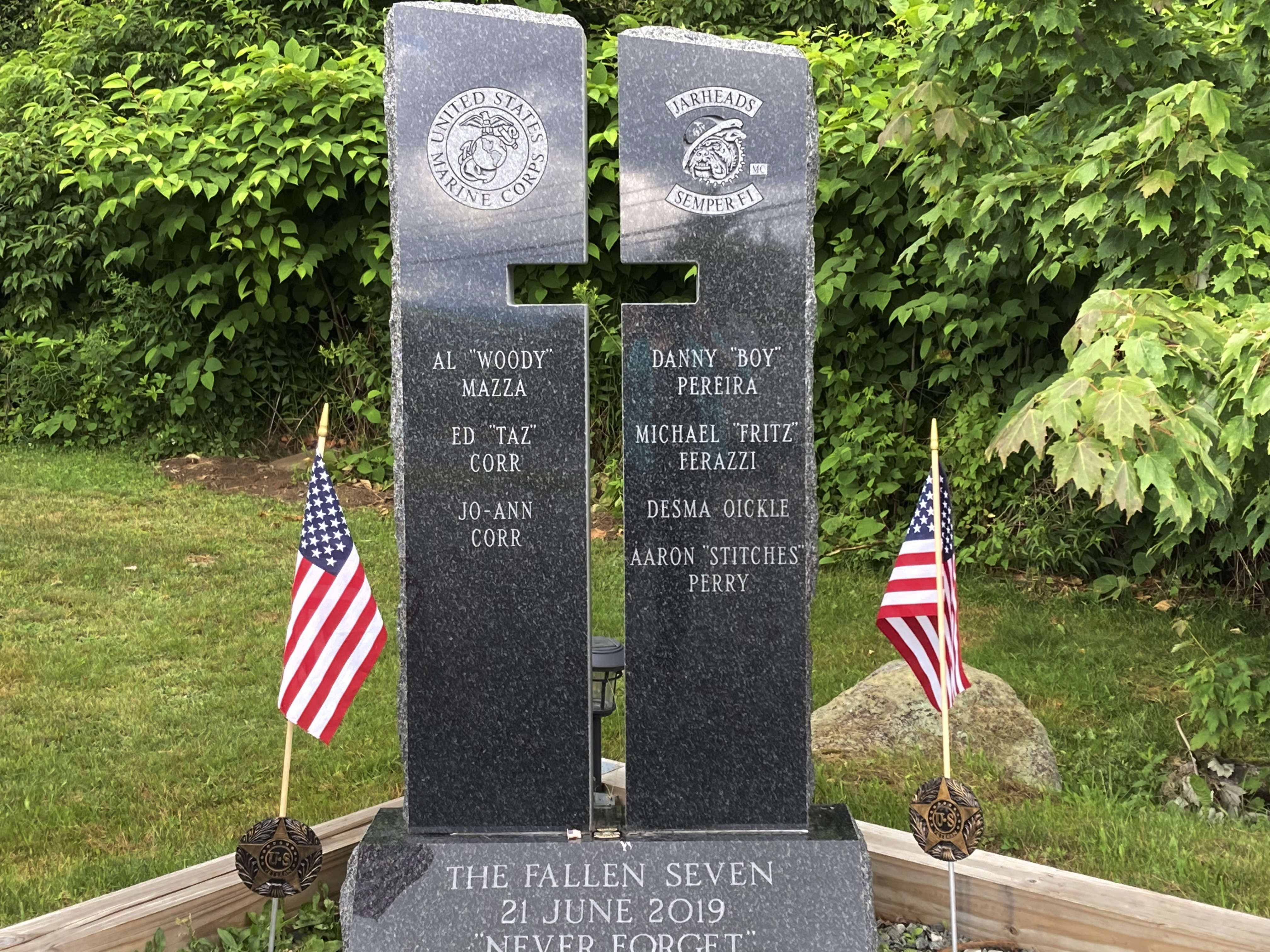 Victim names are listed on two stone pillars, part of a memorial to honor members of the Jarheads Motorcycle Club killed in a nearby crash, are visible July 13, 2022, on the roadside in Randolph, N.H. Volodymyr Zhukovskyy, of West Springfield, Mass., is scheduled to face trial on July 26, 2022, on multiple counts of negligent homicide, manslaughter, driving under the influence and reckless conduct stemming from the crash that killed seven motorcyclists that happened in Randolph on June 21, 2019. (AP Photo/Kathy McCormick) 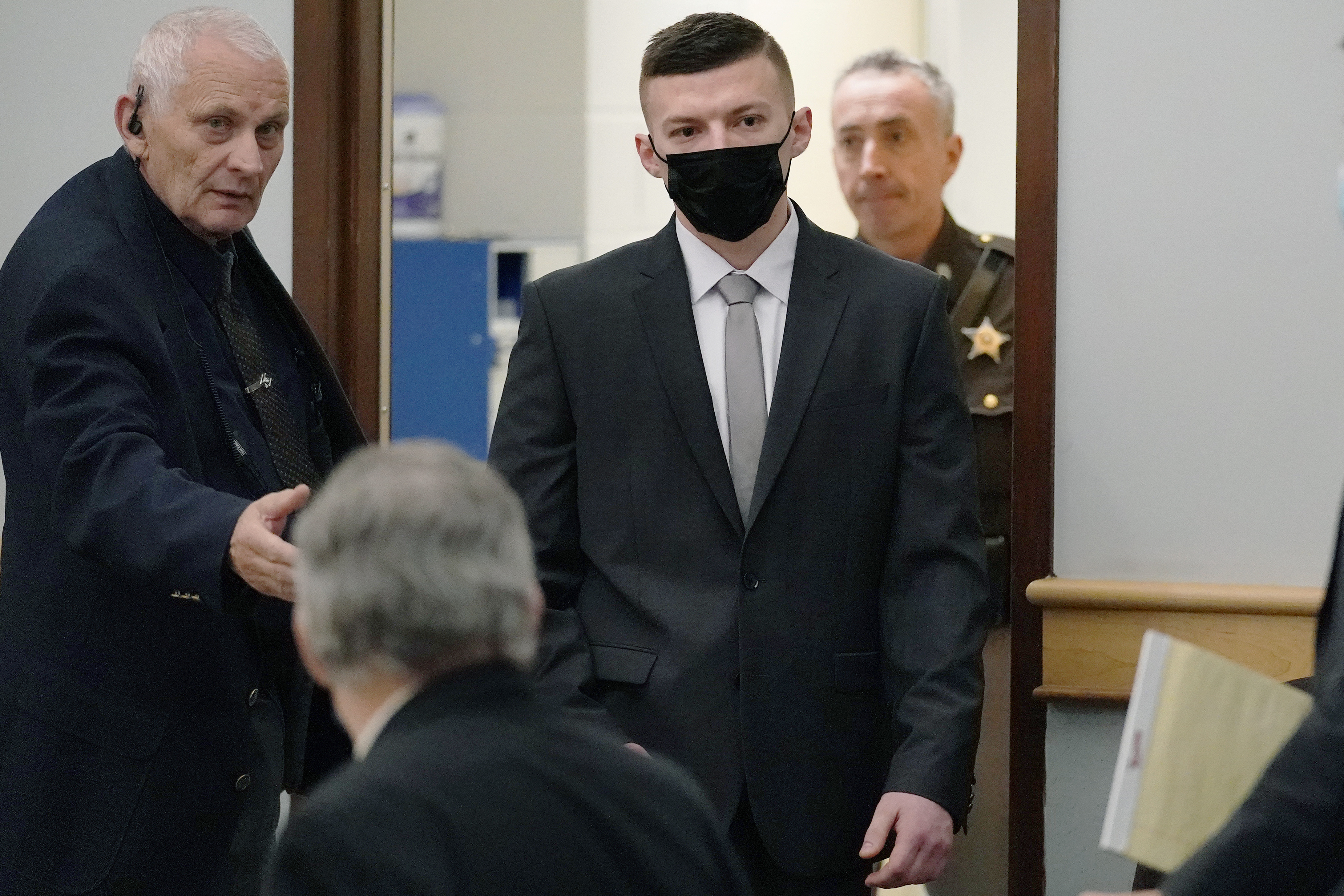 Volodymyr Zhukovskyy arrives for his pretrial hearing at the Coos County Superior Court, Tuesday, Nov. 9, 2021, in Lancaster, N.H. Zhukovskyy, of West Springfield, Mass., is scheduled to face trial on July 26, 2022, on multiple counts of negligent homicide, manslaughter, driving under the influence and reckless conduct stemming from the crash that killed seven motorcyclists that happened in Randolph on June 21, 2019. He pleaded not guilty. (AP Photo/Charles Krupa, Pool File)