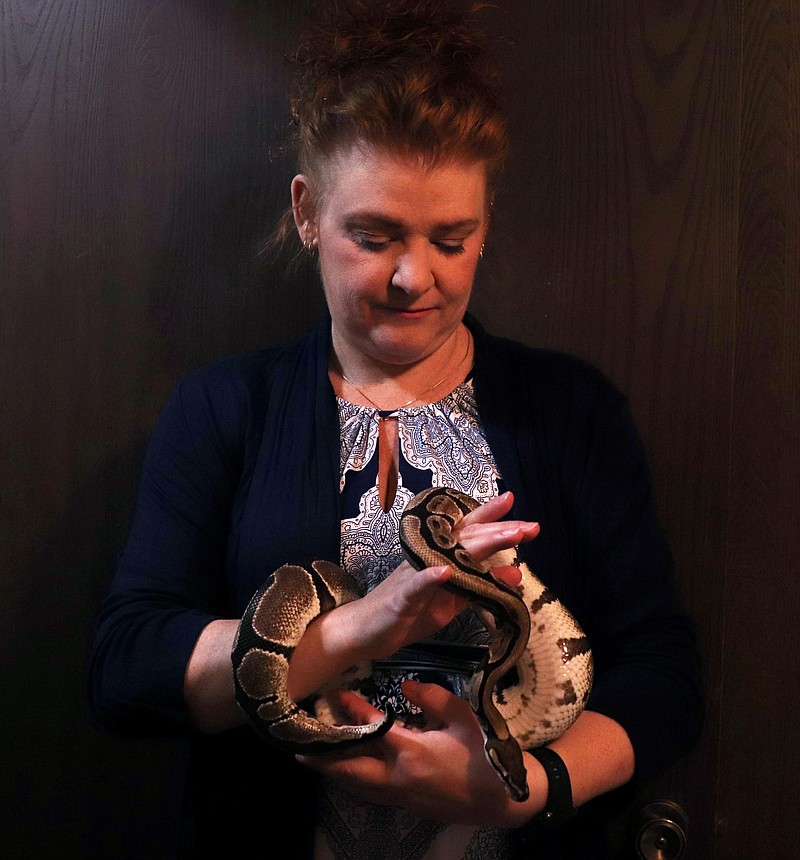 Mindy Craig holds one of her pythons.

Many have gotten a glimpse into the world of exotic pets through Netflix’s hit documentary series “Tiger King,” but the average exotic pet owner doesn’t have cages with tigers, monkeys and jaguars in their backyard.

The neighbor next door probably doesn’t own a leopard, bear or king cobra either, but they might own other more common exotic pets, like iguanas, bearded dragons, snakes or hamsters (yes, hamsters are considered exotic!).

If you are Mindy Craig’s Jefferson City neighbor, you may have seen her with her exotic pets: two 38-inch-long ball pythons and two leopard geckos.

Craig’s journey with exotic pets began when she was staying at a friend’s house in 2013, and her friend’s 10-year-old son came into the living room with something around his neck.

“Stop running around the living room with that belt around your neck,” she told him. “You’re going to get hurt.”

She didn’t have her glasses on, so she couldn’t immediately tell that what was actually around his neck was a 38-inch-long ball python. The snake was given to the boy by a friend, and she quickly realized it was extremely malnourished. She drove from Lake of the Ozarks — where she lived at the time — to an exotic pet veterinarian clinic in Columbia, unsure if he would make it there. The vet told her the snake was blind, severely dehydrated and had a permanent calcium deposit.

Craig made it her mission to nurse the python back to health.

“A week later, I had got weight on him, got him all the new things, did some research,” she said. “He became my pet that day.”

Not long after becoming an exotic pet owner, a friend of Craig’s bred geckos in her classroom and ended up with two males. They learned they could not have two males in one tank because they become aggressive to each other, so Craig took one home.

She didn’t want the spotted creature to be lonely in a big tank, so she took in a female gecko too. While her snakes don’t have names, Craig's sister named her geckos Christian and Ana after the “50 Shades of Grey” characters.

Craig never really pictured herself being an exotic pet owner until she rescued her first snake. Knowing pythons live 20-30 years and leopard geckos 10-20, she understands the commitment needed to take care of these creatures.

Mandy McKay, a nine-year veterinary assistant at All Creatures Animal Hospital in Columbia, said many people are attracted to exotic pets because of their uniqueness compared to common house pets.

When it comes to purchasing exotic pets, McKay recommends reaching out to local breeders.

“If you cannot find a local breeder, there are a lot of exotic specific groups on Facebook,” she said. “Check into a few and ask lots of questions, ask to see photos of their set-ups, ask what they wish they had known before getting their exotic pet.”

“Not all animals suit all people,” he added.

The process of taking care of exotic pets is not the same as caring for cats, dogs or other more traditional animals.

For reptiles, McKay said it is important to have suitable UVB bulbs and heat lamps to keep them at the temperature they need. Whereas for rodents, it’s most important to have a big enough cage for them to run around.

“Most pet stores, unfortunately, do not carry the correct cages for rodents and give out wrong information to sell their ‘cute’ cages,” McKay said.

Speaking of pet stores, McKay said to stray away from toys at common pet stores.

“Unfortunately, a lot of those are not actually safe,” she disclosed. “A lot of rodent toys tend to have honey and sawdust. Too much sugar for a small animal is not healthy, and sawdust isn’t digestible.”

Here are some products McKay recommends for exotic pets:

• Mazuri brand food is great for almost any exotic pet.

• Niteangle has just about everything a hamster could ever need, including running wheels, natural bedding, bathing sand and cages.

Craig buys her live food from CJ’s Pets, and she coins Weadick as her personal “DoorDasher.” Every other week, Weadick drops off 20 live mice and 400 crickets to feed to her snakes and geckos.

“He brings them right to my house,” she noted.

She uses Aspen Snake Bedding for the floor of her snakes’ tanks, and she cleans and replaces it every week.

“It helps take off their shed,” she said. “It gives them something to tunnel under.”

When feeding her two snakes, Craig always moves them into separate containers so they are not fighting for one food source. It also ensures the scent of their prey doesn’t affect the space they live in.

Craig’s biggest piece of advice for prospective exotic pet owners is to make sure there is a veterinary clinic nearby that is willing to care for the pet if needed.

“If you don’t have a veterinarian close to you that can take care of these animals, their suffering can be pretty significant,” she said.

While Craig loves and cares for her exotic creatures, she makes it a priority to not ignore the cold-blooded nature of her reptiles.

“They will never feel empathy or compassion,” she said. Still, she aims to give them the best quality food and a consistently clean environment.

“It’s a cold-blooded animal. Its thought process is to hunt prey and find that and eat it and kill it and sleep,” she said. “But you can make their life easy.”

According to the Animal Legal and Historical Center, any deadly, dangerous or poisonous animal must be kept in a zoo, circus, animal hospital or educational or scientific institution, unless the owner has registered the animal with local law enforcement. It’s considered a class C misdemeanor in Missouri if someone has an exotic animal without the right registration.

To register an exotic animal or reptile in Jefferson City, owners can fill out a form and mail it to the Cole County Sheriff’s Department with a photo of the pet included.

When it comes to owning smaller, more common exotic pets, there is not an extensive process like there is for big cats and poisonous reptiles.

Craig said she did not have to go through a registration process for her snakes or geckos, but she has a close friend whose dad owned a 7-foot-long American alligator that had to have registration.