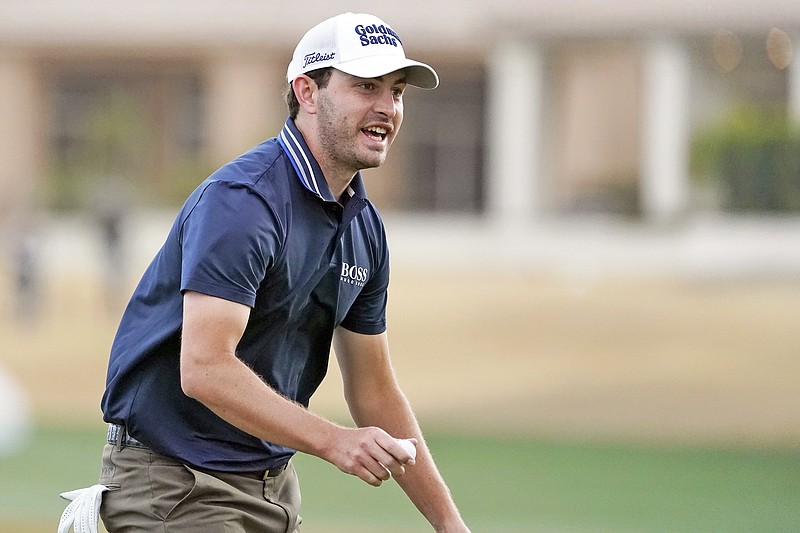 Patrick Cantlay acknowledges the gallery on the ninth hole after finishing Friday's second round of the American Express Tournament in La Quinta, Calif. (Associated Press)

LA QUINTA, Calif. -- Patrick Cantlay fought through gusting wind on his back nine Friday to take a one-stroke lead into the weekend at The American Express in a bid to win for the third time in four starts.

Tied for the first-round lead with Lee Hodges after a 10-under 62 at La Quinta Country Club, Cantlay shot a 68 on PGA West’s Nicklaus Tournament Course to reach 14-under 130.

“I actually putted really well today and made nothing,” Cantlay said. “The greens were a little beat up and it was hard to make putts. But I rolled it really well and I rolled it how I wanted to, I just didn’t get any to go in.”

Tom Hoge was second after a 66 on PGA West’s Stadium Course.

“I really felt fortunate that we got through 17 holes without the wind really coming up,” Hoge said. “Just our last hole there it got gusting.”

Joseph Bramlett, playing in the last group off the 10th tee at La Quinta, bogeyed the final two holes in strong wind for a 67 to drop into a five-man tie for third at 12 under.

Will Zalatoris birdied his last seven holes on the Nicklaus layout for a 61 to also join Cameron Young (68), Lanto Griffin (65) and Greyson Sigg (67) at 12 under. Young played at Nicklaus, and Griffin and Sigg at the Stadium.

The fourth-ranked Cantlay won the BMW Championship and Tour Championship in his final two starts last year to take the FedEx Cup, then opened this year with a fourth-place finish -- at 26 under -- two weeks ago in Hawaii in the Sentry Tournament of Champions.

Last year in the desert, the 29-year-old former UCLA player closed with a Stadium-record 61 to finish a shot behind winner Si Woo Kim. Cantlay will play the Stadium the final two days, with more wind expected today.

“It’s a golf course that suits my game,” Cantlay said. “We’ll see how it plays tomorrow with the increased wind. … Controlling your golf ball will be a premium tomorrow and leaving your golf ball in the correct spot will be really key to scoring well.”

“I feel better playing La Quinta,” Hoge said. “A little more protected over there in the trees, a little shorter golf course. You can play a little more conservatively off tees and just get it in play and go from there.”

Zalatoris finished with a birdie from the wrong fairway on the par-4 ninth. The PGA Tour rookie of the year is making his first start of the year.

“I just gave myself chances,” Zalatoris said. “I hit a lot close and made a couple 20-, 30-footers to keep the round going and, obviously, making birdie on 9 from the wrong fairway is kind of the icing on the cake.”

He wasn’t concerned about the wind that picked up just as he finished.

“I live in Texas, so I’m used to it,” Zalatoris said. “Really, playing golf the last few days without a lot of wind has been a little strange for me, so I’m looking forward to the challenge tomorrow.”

Hodges remained at 10 under after a 72 on the Nicklaus Tournament Course.

Top-ranked Jon Rahm was 8 under after a 70 at the Nicklaus layout. He won the 2018 tournament.

Kim was 4 under in his title defense after a 68 at Nicklaus.

Tournament host Phil Mickelson was 155th in the 156-man field at 7 over. He shot a 73 at Nicklaus after opening with a 78 at La Quinta.