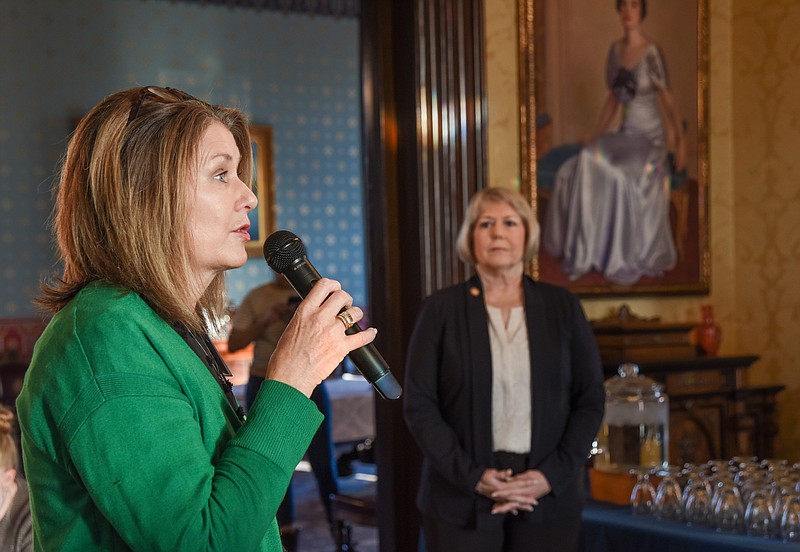 Big Brothers Big Sisters of Jefferson City celebrates its mentors each January, which is National Mentoring Month, but has never held the event at the People's House, BBBS program director Lee Knernschield said.

First lady Teresa Parson invited the organization to host the event at the mansion, which turned 150 years old last year.

"Thank you for what you do for the next generation of Missourians. We're very happy to have you in the house," Parson told about 35 mentors Thursday morning.

BBBS organizes matches between adult mentors (bigs) and children (littles) ages 6-17. Matches are intended to last until the child graduates or turns 17. The BBBS mission is to make a positive difference in the lives of children and youth through a professionally supported, primarily one-to-one relationship with a caring and committed volunteer.

In community-based matches, bigs and littles develop relationships during one-on-one outings and activities -- doing activities like walking through a park, going to cultural events, listening to music, hanging out and talking, going to movies and fishing.

In school-based matches, bigs go to littles' schools for one hour each week to spend time helping with homework, playing games and sports, reading or talking.

"The mansion has never been involved," Knernschield said. "The first lady and second lady (Claudia Kehoe) have been so supportive of mentoring. That's why we thought it would be a really nice location to hold it today. We're also going to be filming a (public service announcement) to encourage state employees to participate through the Missouri Mentoring Initiative."

Parson praised mentors gathered in a large receiving area inside the mansion.

"You give of yourselves for a very important cause," she said. "Because the next generation is something that we all need to dedicate a lot of time to. And I know that Claudia and I are very big supporters of yours and those little ones that you take care of and mentor."

Jacob Robinett, an employee of the Missouri Public Service Commission, said he became a mentor two years ago, when Parson and Kehoe started the Missouri Mentorship Initiative (a collaboration between BBBS and the state).

Robinett said he is a mentor in the school-based program.

He goes to Moreau Heights Elementary School once a week to spend an hour with his little, who is in fourth grade.

"We've done everything from coloring to playing board games," Robinett said. "We've played computer games that they have at the school. We built Legos. We played basketball in the gym."

It doesn't take a huge commitment of time to be a mentor, he said.

And it's a way to make a difference in a child's life.

"You just have to be a consistency in that person's life and be a positive influence for them," he said. "Kaiden (his little) knows that every Friday, I'm coming. He goes around and introduces me to everyone in the school as his brother."

Jefferson City Schools canceled classes today, so bigs said they rescheduled visits for Thursday. They said their littles count on them.

BBBS of Jefferson City has 100 littles matched with bigs, but would like to return to more than 150 matches, Knernschield said.

"Every week you go into schools or out into the community and mentor a child," she said. "We all know the benefits of that. Certainly, as a volunteer, you receive benefits as well. We could not do our job without you. We believe as a staff that mentoring changes children's lives. You're a big part of why this happens. So, thank you for that." 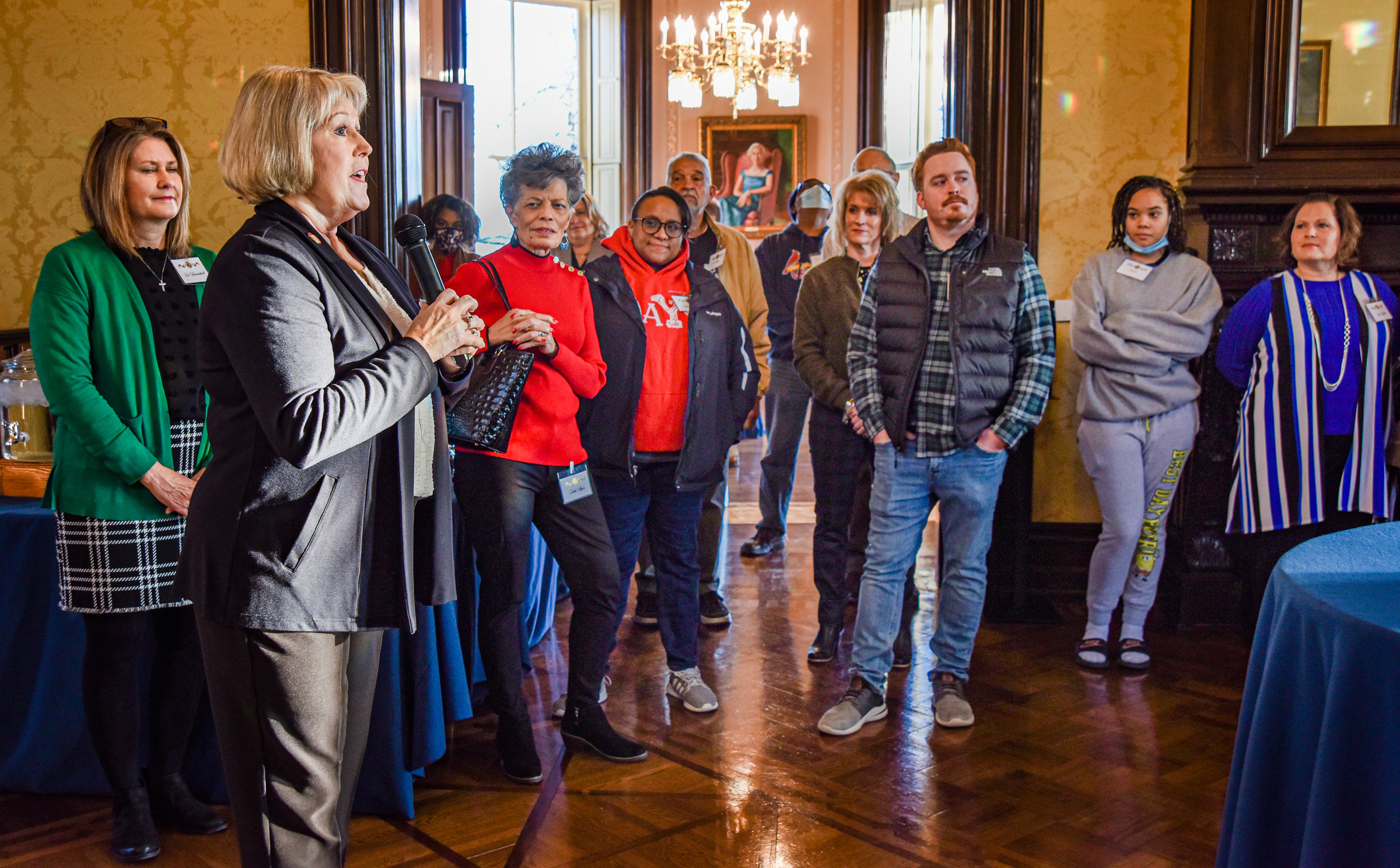 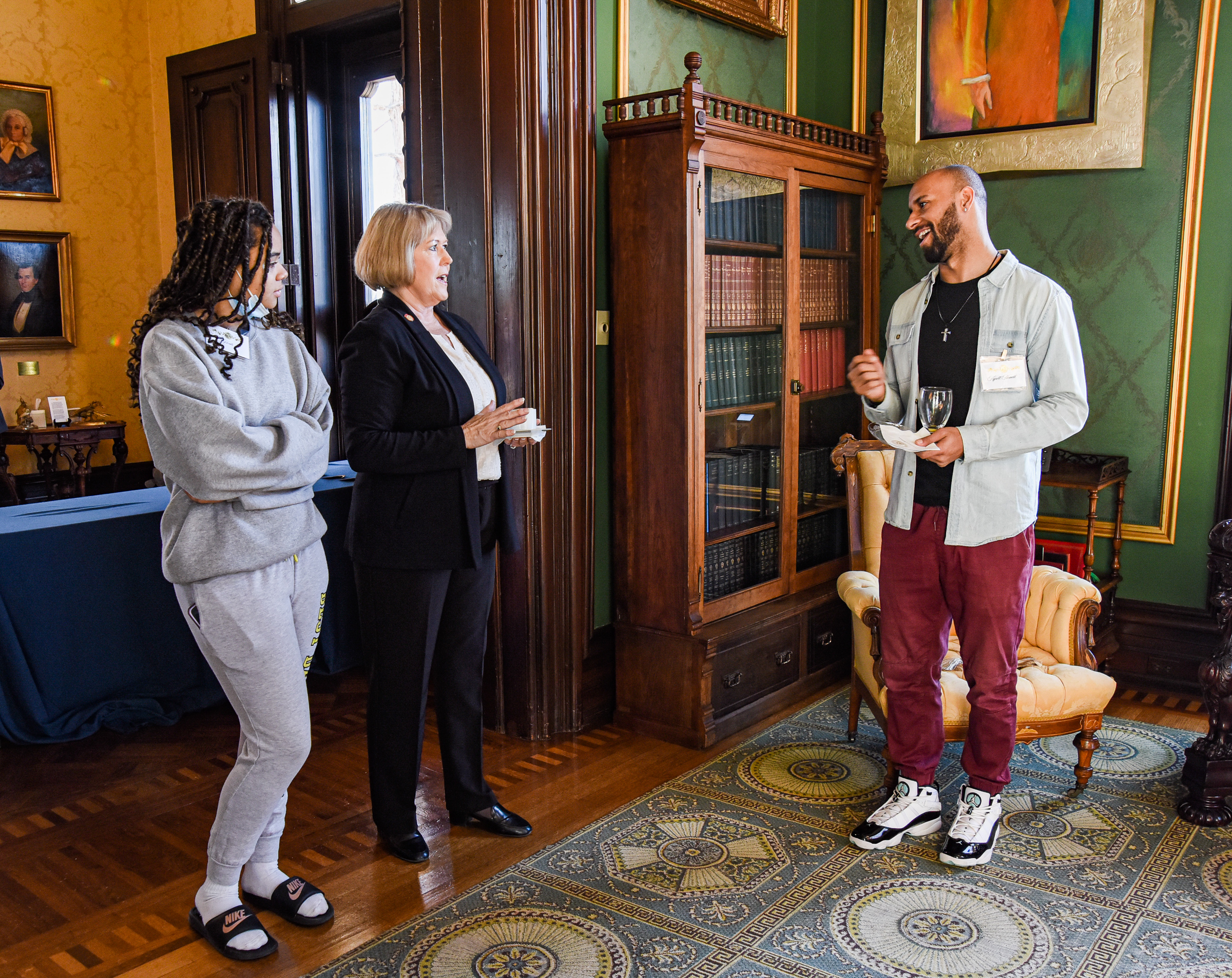 Julie Smith/News Tribune First Lady Teresa Parson, middle, visits with Kyrell Newell while giving Heidi Driver, left, a tour of the first floor of the Missouri Governor's Mansion Thursday. Driver is a little and Newell is a new big in Jefferson City. As part of Mentoring Month, volunteers from Big Brothers Big Sisters were welcomed to the mansion by Parson and Second Lady Claudia Kehoe to thank them and record a public service announcement to encourage state workers to give an hour a week to be a mentor to a student. The time would be paid time off. 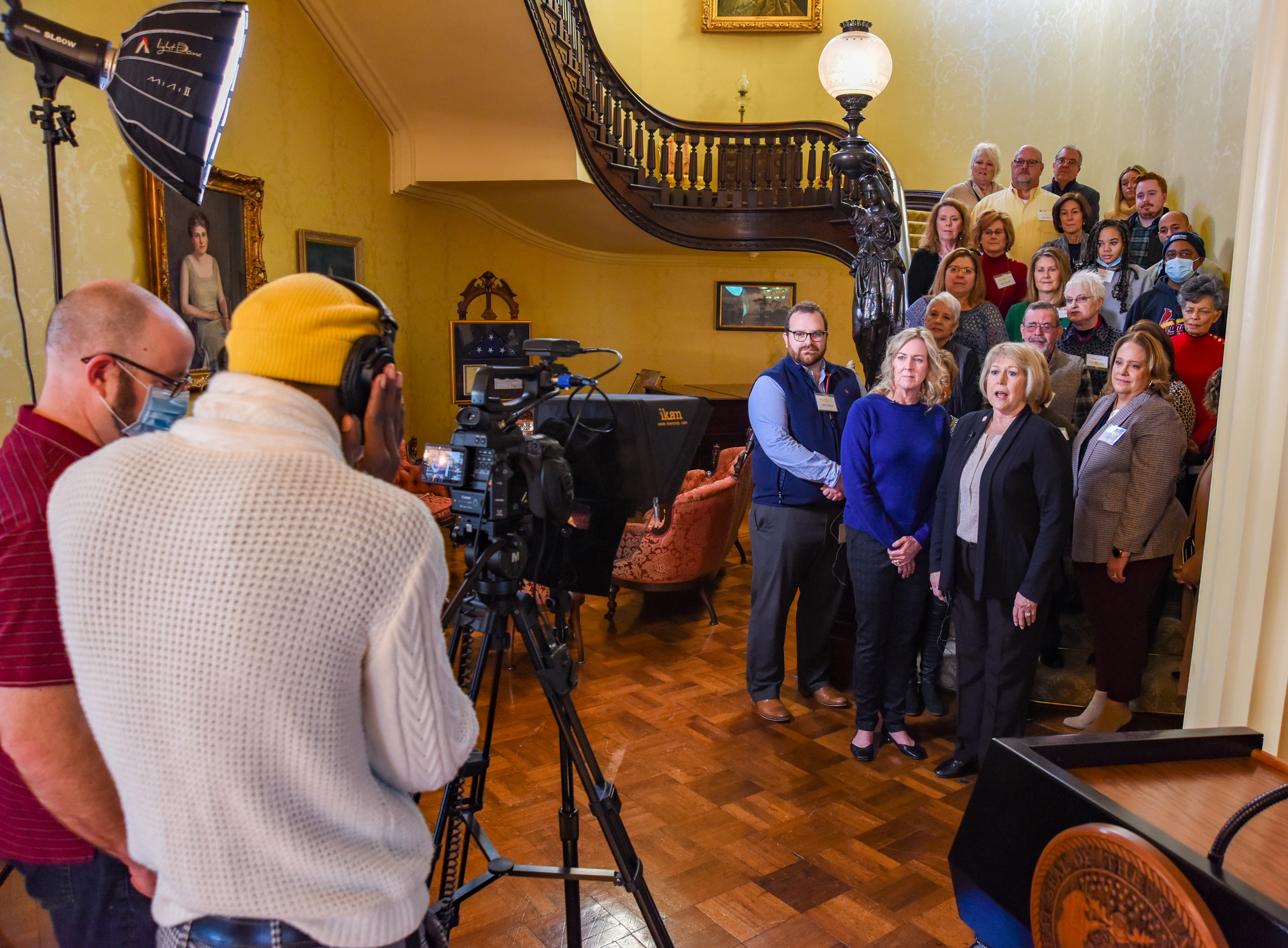