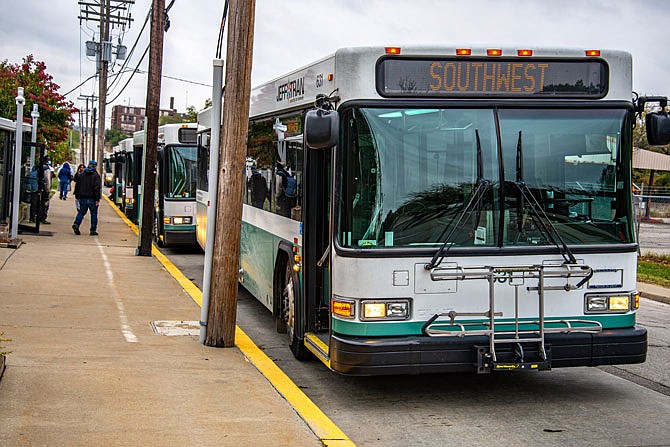 A plan to find a new home for the city's transit system may have to take a different route, due to the constraints of available locations and the conditions attached to federal funding.

Jefferson City built the current JeffTran facility approximately 40 years ago and received a grant last year from the Federal Transit Administration to explore options to update them.

The study is nearly complete, according to staff, and suggests a complete overhaul of the facility may be needed.

The study has examined two city-owned properties as the site for the facility, but both have shortcomings, officials said.

The facility's current location on East Miller Street is one of the sites being studied; it also houses streets department offices and storage for various other city departments.

East Miller Street is a good location for JeffTran because it's near the people who use the service the most, according to the study. However, the location doesn't have room to grow or accommodate the service.

Since both of the study's options included relocating other city divisions, city staff asked the consulting firm, Dake Wells Architecture, to look into new locations for a JeffTran facility.

"This is a planning effort," Public Works Director Matt Morasch said. "It's not set in stone, and it basically goes into ... what are the ramifications if this happened. We know we need to have something happen, and there's probably a lot of opportunities for federal grants coming out, especially in the transit field."

Morasch said one issue with using both locations -- putting central maintenance at Hyde Park, but keeping offices at East Miller Street -- is it no longer looks like a shared-use facility, which leaves a big question.

"Maybe we do need to begin looking at other sites that aren't city owned, that we'd have to purchase for the facilities," he said. "The idea that we could find a site that is big enough so we can put all these things back on the same site together and therefore be more likely to convince the transit folks that 'yes, this is truly a facility that is a transit facility.'"

Bange said the consultant is looking into those options. He hopes to have the study completed by the end of the month or the beginning of February.

"The whole process puts us in a position where we can have documents in place so if there were to be fund that are available through grant opportunities, we would be prepared to move forward with applying for those," he said.