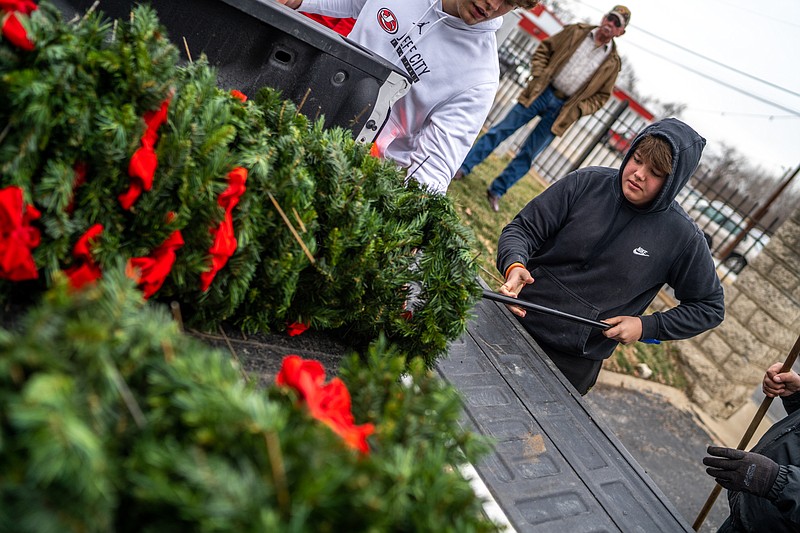 Avery Holland puts the last of the wreaths which were laid at the National Cemetery in the back of a truck Friday to be taken away. The wreaths were laid in December to honor veterans. (Ethan Weston/News Tribune)

It was definitely a case of ask and you shall receive.

Seeing that snow was in the forecast this weekend, the Jefferson City Wreaths for Heroes Committee got the word out they needed volunteers to help remove nearly 1,600 Christmas wreaths that were put out in December at the National Cemetery on East McCarty Street.

The volunteers came through Friday morning.

After just a few hours of work, the wreaths were removed and back in their storage facilities at Jefferson Plaza. This was the first year these wreaths were used so it was important for the group to get them back in good shape for next year, organizers said.

“We lucked out with the weather and a great turnout,” said Pete Atkins, co-chairman of the Wreaths for Heroes Committee. His wife, Lorraine, began the annual memorial event back in 2010.

Among those helping out were 20 members of the Jefferson City Jays football team. Adkins, the Hall of Fame football coach for the Jays, was glad to see the young men taking time to help out.

“More hands helps get things done faster,” Adkins said. “Until we started this program, I don’t think a lot of people that lived in Jefferson City even knew we had a national cemetery. We hope we can get enlarged — we’re working on that.”

The cemetery ran out of space for new burials in 1961 and sites for cremations in 1996. It is only open to subsequent burials for veterans or eligible family members at existing grave sites.

Nathan Redcay, a Jays assistant varsity coach, said they were glad to serve and help Adkins, a World War II veteran himself.

Don Hentges, president of the Jefferson City Veterans Council, said it’s not often that you’re able to get something done before you planned to start your work, but that’s what happened Friday.

“We had said we’d be removing wreaths beginning around 11:30,” he said. “But we had people out working at the cemetery at 10 a.m.

“I think that says everything about Jefferson City. This is what our veterans fought and died for so we could do this. I know Lorraine Adkins and several of our veterans are in heaven smiling down and so pleased with this,” Hentges said.