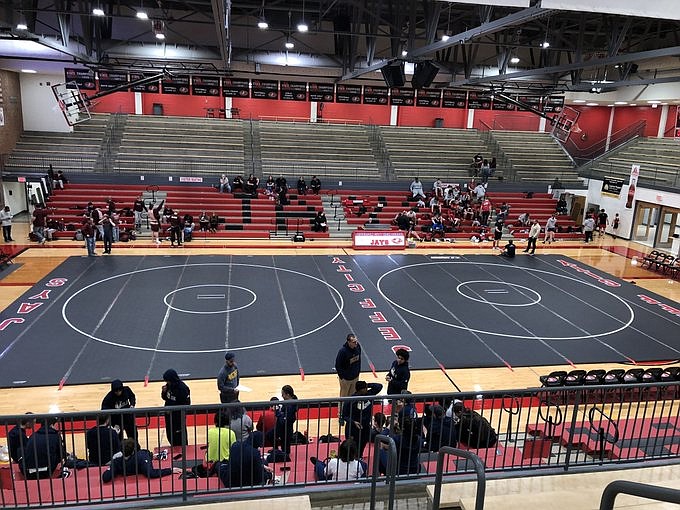 The Jefferson City Jays and Lady Jays celebrated Senior Night the best way they knew how.

The Jays and Lady Jays both finished 2-0 in duals against Battle and Eldon on Wednesday night at Fleming Fieldhouse.

“It’s a great group of seniors,” Jays coach Phil Cagle said. “They have been coachable and that what makes a good athlete a good wrestler.

The Jays defeated the Mustangs and the Spartans by identical 66-9 scores.

Cagle was pleased with the success the underclassmen have made in the lower weights.

“They’re starting to turn it around and I’m really proud of what they’ve done,” Cagle said. “Out here on the mat is where they are really going to develop that confidence. It’s coming.”

Jefferson City is scheduled to host the Steve Johnson Duals on Saturday.

“Our good kids need to see wrestlers like we’re going to see Saturday,” Cagle said. “Winning the tournament would be nice, but we need to see some tough competition and we’ll definitely get it.

Action is scheduled to begin at 9 a.m.

Lydia Hudson picked up the Lady Jays’ lone win on the mat against Eldon, picking up a pin at 120.

Winning on the mat against Battle were Alexis Dunwiddie at 125, Kaylee Redcay at 135 and Deja’Nette Wallace at 174. All three won their matches by fall after getting forfeit victories against Eldon.

In the first boys dual of the night, Eldon defeated Battle 46-24. On the girls side, Battle was a 33-0 winner against Eldon.