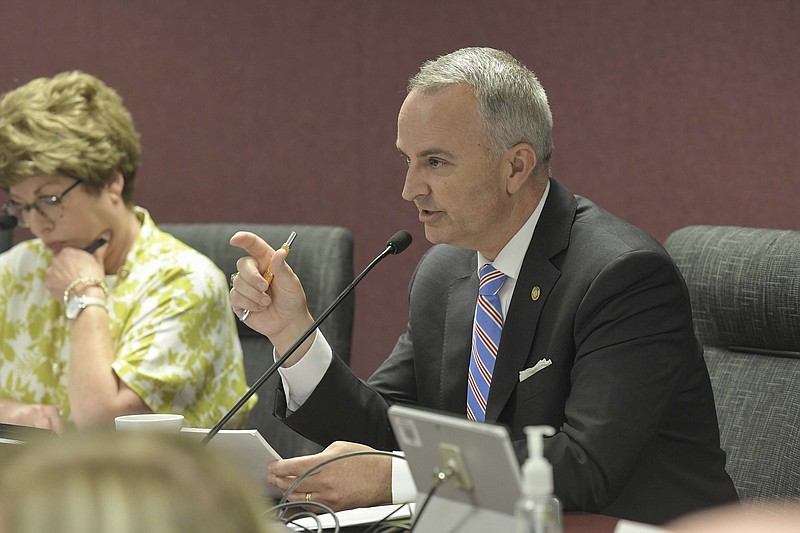 Education is likely to be a real battleground at the Missouri state Capitol this year, as evidenced by Tuesday's hearing on bills that dealt with Critical Race Theory and parental rights in schools.

The hearing covered House Bill 1747, sponsored by Rep. Chuck Basye, R-Rocheport, which would establish a recall procedure for local school board members, and House bills 1995 and 1474, two takes on a "Parent's bill of rights" sponsored by Rep. Doug Richey, R-Excelsior Springs, and Rep. Nick Schroer, R-O'Fallon.

The hearing hosted a record-breaking number of testimonies submitted, and the crowds that came in support and opposition spilled out of the room and into the hallway, where many sat on the floor as they watched the debate on a TV screen or on their phones. Those in the hallway reacted visibly and audibly to many parts of the hearing with head shaking, laughter and applause. Much of the discussion focused on the latter two bills, which the bill filers agreed could be combined because they are similar in focus.

Richey's bill would require school districts to address a plan for how parents can object to material or withdraw from courses that discuss human sexuality. It also would require a district to have a notification process in which parents could outline "divisive or controversial" topics they would like to be informed of before their child learns about them. It would also establish a transparency portal where parents can review curriculum and instructional materials.

Schroer's bill, HB 1474, would require schools to provide specific rights for parents in the district, including the right to knowledge of curriculum, the right to visit the school and check on their children during the day, and the right to "sufficient accountability and transparency regarding school boards."

The most contentious part of the bill was its prohibition of the teaching or use of Critical Race Theory and the 1619 project.

Critical Race Theory is an academic framework that looks at how race and racism affect politics, culture and law, and focuses on the idea racism is systemic and not only the product of individual biases or prejudice.

Richey and Schroer took questions together. They called the rights listed "benign" and said they were intended to address the concerns of parents that they had heard from.

In response to comments the legislation was intended to silence certain viewpoints, Schroer said the bill was not about censorship but about teaching all history. He said he saw nothing in the bill "that would prevent a full teaching of all history -- the good, the bad and the ugly."

Lawmakers and people who testified in opposition cited a "chilling effect," arguing the bills would make teachers reluctant to teach important concepts.

Richey responded there was already a chilling effect on conservative teachers who had to teach in a "far left" environment.

Regarding the notification requirement in Richey's bill, Rep. Marlene Terry, D-St. Louis, asked what would happen if two parents disagreed on topics they wanted to be notified about. Richey said both parents would receive notifications on the topics they had chosen.

Rep. Brad Pollitt, R-Sedalia, worried about the clause that would allow parents to visit during the school day. Could a parent come to a classroom and sit in in an intimidating manner?

Schroer said he'd be happy to talk about the details and address any flaws in the bill.

Rep. Ian Mackey, D-St. Louis, also cited a "chilling effect" and told Richey and Schroer they should "let the teachers teach" and let students learn, a call that was echoed on many T-shirts of others who came to oppose the bill.

"We learn through controversy," he said.

After the testimony period ended, long lines of people dropped off witness forms, several indicating they were opposed to the bill.

"There's no mechanism to address a recall for a school board member," Basye said. The bill is similar to a bill he put forth last year, with one major difference -- the threshold to obtain a recall has been lowered to 10 percent from 25.

Witnesses in opposition questioned whether the bill would increase harassment of school board members or increase "politicking" to prevent the chance of recall.

Brianna Lennon, secretary for the Missouri Association of County Clerks and Election Authorities, also presented some administrative concerns. She said that since school districts cross many county lines, there is additional collaboration needed and the process of picking more than one school board candidate on each ballot leaves it unclear whether percentages needed to recall a member would refer to ballots or voters.