Press Box: Who can stop SEC from swallowing college football? 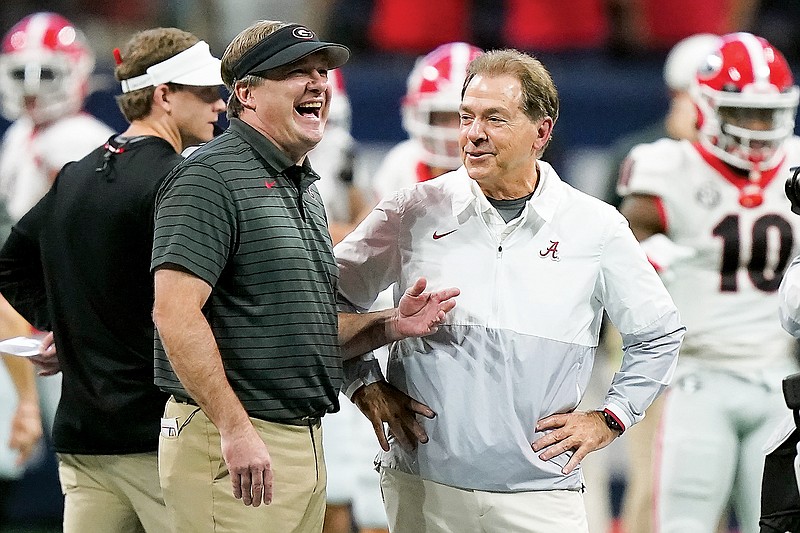 In this Dec. 4, 2021, file photo, Georgia coach Kirby Smart shares a laugh with Alabama coach Nick Saban before the start of the SEC Conference Championship Game in Atlanta. (Associated Press)

INDIANAPOLIS -- As another season winds down in the frigid heart of Big Ten country, there’s no doubt who runs college football.

The Southeastern Conference is the beast that ate everyone else.

The College Football Playoff should be abbreviated S-E-C, not C-F-P.

For those suffering from SEC fatigue, who wish someone — anyone! — could bring a little variety to an increasingly stale game, well, the outlook isn’t good.

There’s little hope of this one-conference rule waning as Alabama prepares to face Georgia — yep, a pair of SEC members who already played a few weeks ago — in the national championship game tonight at Indianapolis.

If anything, the proposed expansion of the playoff, from four teams to a whopping dozen, would only tighten the SEC’s ironclad grip on the game.

Alabama and Georgia are clearly the nation’s best programs, and the bulk of their most feasible challengers — the ones with the tradition and recruiting bases and financial clout — are also members of a conference that will soon grow to 16 schools.

The SEC already has LSU, which won it all just two seasons ago and has now lured Brian Kelly away from Notre Dame to be its coach.

And Texas A&M, which has quickly become a trend-setter in the bidding wars of the name, image and likeness era.

And Florida, which keeps striking out on coaches but has everything else in place to recapture its place among the nation’s elite.

With the poaching of four-time playoff participant Oklahoma and simmering powerhouse Texas from the Big 12, it’s easy to envision an expanded playoff that is made up of five or six SEC schools on an annual basis.

No wonder commissioner Greg Sankey is very much in favor of the 12-team playoff, but has no problem remaining at four if other leagues — namely, the Big Ten and Atlantic Coast Conference — keep balking at the bigger format unless it comes with automatic qualifiers for every Power Five league.

“If we are going to move off the four-team format, the proposed 12-team model works well and compared to others, works best,” Sankey said during an appearance last week on Paul Finebaum’s SEC Network show. “We’ll see if others are prepared to act.”

And what about the current format?

“Seventy-five percent of the time, we are winning the championship under the current format,” Sankey boasted. “We are comfortable continuing in that mode.”

A quick check of the math reveals Sankey is a lot better at running an unbeatable conference than he is at math, since whoever wins tonight will give the SEC five champions in the eight-year history of the playoff (which the calculator on my phone shows is 62.5 percent).

Maybe Sankey was referring to a larger body of work. If the last eight years of the Bowl Championship Series (which matched the top two teams) are combined with the CFP’s eight-year history, the SEC will very shortly have 12 of the last 16 titles.

Of the four championship it didn’t win during that span, three were claimed by schools within the SEC’s footprint, which only adds to the perception college football is largely a southern game. (Clemson twice beat Alabama for the title, while fallen power Florida State took the last BCS title during the 2013 season).

No reason to think adding eight teams to the playoff mix is going to change things much.

The most distressing truth about the current state of affairs is the lack of any serious challengers to the SEC dominance beyond Clemson and Ohio State, the latter being the only non-southern team to win a title in the last 16 years.

Notre Dame has gotten a couple of bites at the playoff apple, only to get blown out both times. No doubt that factored into Kelly’s shocking decision to abandon the Fighting Irish in favor of the Bayou Bengals (along with enough money to buy a whole lot of beignets).

Michigan State’s lone playoff appearance resulted in a 38-0 loss to Alabama. Michigan made it for the first time this year — and got smacked n the face by Georgia 34-11. After becoming the first non-Power Five team to earn a playoff spot, Cincinnati was one-and-done with a 27-6 loss to the Crimson Tide.

After losing all four of its CFP appearances as a member of the Big 12 — three of them to SEC schools — Oklahoma decided if your can’t beat ’em, join ’em.

We’ll soon find out if the Sooners were better off as a big fish in a smaller pond than they will be trying to make waves in a 16-team SEC. However the move turns out, their stunning decision to bolt the Big 12, along with Texas, was the surest sign yet that others have grown weary of trying to keep up.

Along those same lines, there is frequent conjecture Clemson might be eyeing a move from the ACC, which would further consolidate the SEC’s dominance.

Even now, there are only a couple of feasible challengers from outside the Deep South.

Start with Ohio State, of course. The Buckeyes are about the only school that’s been able to keep up from a recruiting and financial standpoint, earning four CFP appearances, two trips to the title game and a national title in the playoff’s debut season. We’ll withhold judgment on Michigan, another traditional Big Ten powerhouse that finally knocked off Ohio State this season; the Wolverines must show some staying power.

The other school to keep an eye on is Southern Cal.

The Trojans have all the elements to compete for championships — big-money donors, a storied tradition, an attractive market for NIL dollars — but have struggled to find the right coach since Pete Carroll left for the NFL after a decade of dominance.

USC seemingly addressed that gaping hole with the hiring of Oklahoma’s Lincoln Riley, another coaching move that seemed to be influenced by the SEC.

While a mammoth contract was surely the biggest lure, the thinking goes that Riley wanted away from the Sooners before they moved to their new conference home. He certainly figures to have a better chance of making the playoff at USC than he would have in the SEC.

Even so, he’s probably going to have to beat an SEC team at some point to celebrate a national title.

Good luck with that.

Paul Newberry is a national sports columnist for the Associated Press. Write to him at [email protected]