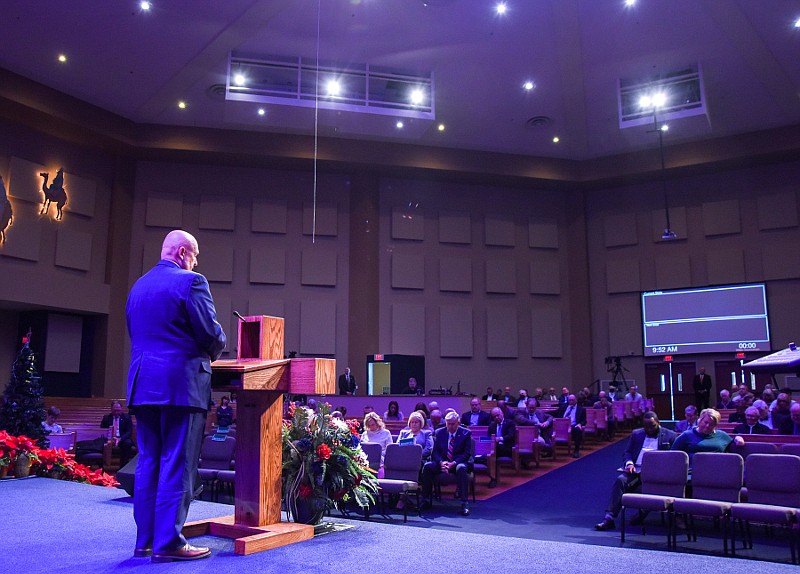 The nation is broken, the Rev. Monte Shinkle said.

And we pray for our families and institutions, the former senior pastor at Concord Baptist Church told more than 100 lawmakers and government leaders Wednesday morning.

"We have known your favor. And you have been so good to us," Shinkle prayed during the annual Prayer Service for Missouri Government Leaders. "If we've ever needed you, Lord, we need you now."

Shinkle prayed God would renew our spirit, and we'd trust in him.

Canceled last year because of the COVID-19 pandemic, the annual breakfast and service returned again on the first day of the legislative session.

Shinkle took a moment to tell listeners he's been a pastor for almost 50 years.

When he started, the country was divided over the Vietnam War. He said he "came to Christ" not long after the Kent State massacre, May 4, 1970, when the Ohio National Guard marched on the campus south of Cleveland and fired on a peace rally, killing four and wounding nine.

A spattering of "amen" came from listeners.

"Father in Heaven, we live in a world that is filled with frustration and sorrow. Enmity is in the hearts of mankind," he prayed. "Enmity toward you. Enmity toward one another."

"We are people that are dissatisfied with life," Shinkle prayed. "Our hearts are not at rest. And, our hearts cannot be at rest until they find their rest in thee. I pray for this country that I love."

He prayed God would stir us in such a way we would look to him for answers.

It was an early morning for lawmakers, whose day included the start of the 101st General Assembly's Second Session. About 100 lawmakers attended the breakfast and prayer service.

The Rev. Eddie Bumpers, senior pastor at Crossway Baptist Church in Springfield, described how the Old Testament of the Bible explains what makes a great leader.

In the Book of Exodus, Bumpers said, Moses was the leader of God's people, and the weight of leadership is crushing him. Moses meets with his father-in-law, Jethro. Jethro gave Moses advice about being a leader.

Jethro told Moses three things -- develop a heart of gratitude, focus on responsibilities and put good people around you.

"We're all born in slavery to sin. We're born in bondage to our own flesh and our own nature," Bumpers said. "And we're all underneath the condemnation of God."

Gratitude makes us humble and gives us contentment.

"Focus on your responsibilities," Bumpers said.

Moses stood in judgment for people from morning to night every day. Jethro told Moses that he couldn't do that by himself.

He needed to be a person of prayer.

"If we're going to see our nation impacted, people in places of leadership must get back to believing this book is the word of God," Bumpers said. "And, it doesn't change.

Finally, Moses needed to find the right kinds of men to help him, Bumpers said.

No one can lead alone.

"Recruit people that have capacity. People that can do the job," he said. "People who fear God, men of integrity, men of truth and men who are not just greedy for money."

They are key ingredients in our lives and the lives of people who serve with us, Bumpers said.