Chiefs pivot again after game against Broncos flexed to Saturday 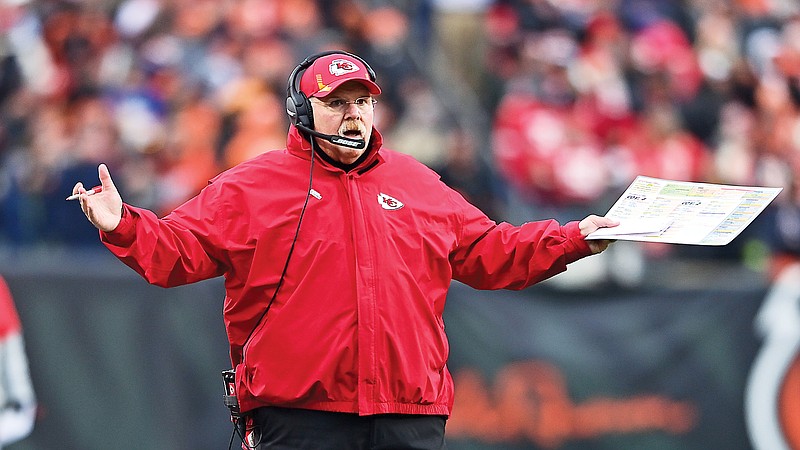 Chiefs coach Andy Reid reacts on the sideline during the second half of last Sunday’s game against the Bengals in Cincinnati. (Associated Press)

Kansas City Chiefs coach Andy Reid is a meticulous creature of habit, choosing to hold meetings and practices at the same time and in the same order every week during the long NFL season.

If it was up to him, the Chiefs would play their games at the same time every week.

Definitely not Saturday, either.

As part of the league’s decision to expand to an 18th week — already a deviation from the norm — it added the ability to shift games from Sunday afternoon to standalone slots Saturday. And wouldn’t you know it? The Chiefs are one of ’em, their trip to Denver getting moved up 24 hours (the Cowboys-Eagles game being the other one moved).

The idea is to provide even more juice to the final weekend of the regular season by showcasing games that have playoff implications. And the Chiefs-Broncos game has ramifications that could extend right into Sunday night.

The Chiefs (11-5) need to win and hope the Titans lose in their trip to Houston the following day to earn the No. 1 spot in the AFC, which includes a first-round bye and home-field advantage throughout. If the Chiefs lose, they could conceivably drop off the two-line in the playoff bracket depending on how other games play out.

So the fact Reid has a day less to prepare for such an important game doesn’t sit well with some in Kansas City.

“I guess COVID-19 has helped us in that area, being able to hang in the box and swing at curveballs and not bail out,” Reid said. “It affects a lot of people, (team president) Mark Donovan on down to us. We have to move things and organize. We’re lucky we have an organization that really busts its tail to make sure everything goes smooth.”

The NFL has had the ability to flex games for years, but moving games in the new final weekend is — well, new. But the Chiefs and Broncos do have some experience with changes this season; their game in Kansas City in early December was pushed back from an afternoon kickoff to a primetime game on NBC.

The Chiefs altered their practice schedule this week by essentially moving everything up a day. Their first full-squad field work is typically Wednesday, but it took place Tuesday, and the final walk-through will be Friday.

“We have to have a good week of practice. We don’t care when we’re playing,” Reid insisted. “That’s the kind of locker room I’ve got. We’ll roll with it. It’s a little sudden change for everyone involved, but Denver is doing the same thing.”

Indeed, the Chiefs have a lot to work on this week.

They were in control of their own fate before losing on a last-second kick in Cincinnati last weekend. They were gouged by Joe Burrow (446 yards passing, four TDs) and Ja’Marr Chase (266 yards receiving, three TDs) on defense, failed to reach the end zone in the second half on offense, and they combined for 10 penalties for 83 yards — including a couple that otherwise would have allowed Kansas City to force overtime.

After that performance, maybe it’s not such a bad thing the Chiefs will be back on the field sooner than they thought.

“I’m glad we got back at it right quick and we could turn the page,” Chiefs linebacker Anthony Hitchens said. “You have to be able to adjust in this day and age, whether it’s a COVID issue or switching games. But yeah, we’re ready.”

Notes: The Chiefs designated DB Chris Lammons (ankle) and DT Khalen Saunders (knee) to return from injured reserve, beginning a 21-day window in which they can practice before they must be added to the 53-man roster. Lammons plays on numerous special teams while Saunders is a role player on the defensive line. … RB Clyde Edwards-Helaire (shoulder) did not practice again Wednesday, putting his availability for the game against Denver in doubt.