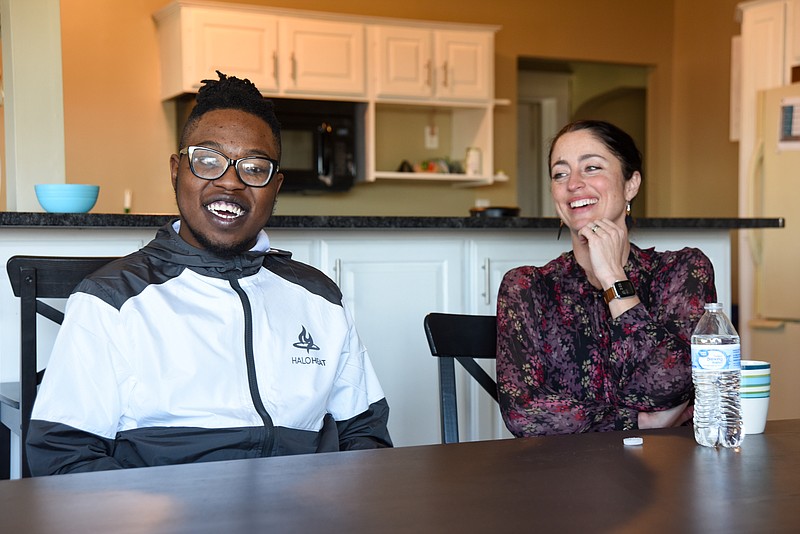 Julie Smith/News Tribune HALO founder Rebecca Welsh, right, can't help but smile as she shares with a reporter the joy that Ziere Wade brings to a room when he walks in. Wade attends a local high school followed by regular attendance in the HALO JC Boys program. HALO is hosting a virtual fundraiser this weekend to help fund activities for both the boys and girls programs.

A day after his birth, Ziere Wade's doctors didn't expect him to live more than just a few days.

But Ziere far surpassed those expectations.

He was airlifted to a hospital and diagnosed with Hypoplastic Left Heart Syndrome, which is a birth defect that affects normal blood flow through the heart.

That was the path Ziere faced.

But after countless surgeries and trials of hardship, the Jefferson City teen will celebrate his 20th birthday this April, thanks in part to his tremendous resilience and the support of a Capital City organization with a global reach.

As a high school student in the Jefferson City School District, Wade started going to the HALO Foundation's JC Boys Program, where he has received mentorship and tutoring and made many new friends.

Because of his heart condition and a later diagnosis of cerebral palsy, which affects his muscle coordination and speech, he was previously unable to pursue one of his lifelong goals -- playing on a basketball team.

With the help of the HALO Foundation's JC Boy's Program, Wade has beaten the odds and joined his teammates on the court as a member of HALO Heat, an AAU basketball team organized by the foundation.

"He's always wanting to be self-sufficient and independent," said Lorren Wade, his aunt. "It's something he's desired after, but he's definitely more driven to take the necessary steps to accomplish it now."

Wade has been part of the HALO JC Boys Program for about two years and is working toward skills like driving and starting his first job, his aunt said.

"Ziere is insanely resilient," she said. "He always finds a reason to smile and encourage other people around him."

His inspiring story will be shared Friday in a short documentary at "Defying the Odds," a virtual art auction for the HALO Foundation, an outreach program with two locations in Jefferson City and many others around the globe that strives to provide housing, life skills, meals and more to youth in need.

Locally, the HALO JC Girls Home offers temporary housing for young girls who are homeless or in high-risk situations. The HALO JC Boy's Program provides resources to male teens along with home-cooked meals and mentorship at their location during afterschool hours.

Rebecca Welsh, of Jefferson City, created the HALO Foundation over 17 years ago and has continued to expand the nonprofit's reach through communities worldwide.

Her journey began shortly after graduating from the University of Missouri, when she joined Mercy Ships on a medical mission trip to Central America.

While serving communities in Honduras, Welsh met dozens of young children living on the streets.

"There was a little girl I met who was 6 years old, named Daisy, who begged me for water," Welsh said. "I'd never seen anything like that."

Continuing to see the issue of housing insecurity and homelessness for young people, Welsh enlisted the help of a group of students in Kansas City and raised more than $250,000 to help children in need.

"That's how HALO started," she said.

During the pandemic, the organization shifted its annual fundraising art auction to a virtual setting where they highlighted the story of a young woman from Kansas City who went through the HALO program in a short documentary.

"We ended up keeping the same model this year because we didn't know what was going to happen, and we decided -- why not feature one kid a year?" Welsh said.

Since the success of last year's virtual auction, the HALO Foundation has drawn in notable supporters from across the world.

"There's a lot of people who have seen his story and who are participating, like Oprah Winfrey," Welsh said about Friday's event.

Some of the highlighted auction items are Oprah Winfrey's autographed Jimmy Choo heels and a Holiday Getaway at Perennial Vacation Club at Daytona Beach.

Friday's events will begin at 6:30 p.m. with a pre-show; the program will run from 7-8:30 p.m. Participants can watch from their phone or television and register at haloworldwide.org/artauction.

"Our philosophy at HALO is that everybody has something to give -- time, talent or treasure," Welsh said. "It's important for people to have the opportunity to use their talents for good."

In the accompanying video, HALO founder and CEO Rebecca Welsh talks about the documentary that tells Ziere Wade's inspiring story.