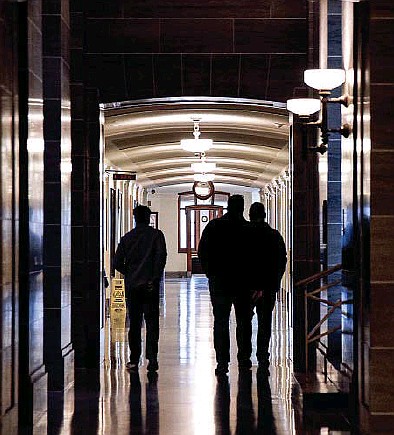 The Missouri Capitol hallways are peppered with the occasional legislator or staffer making their way from one room to another Tuesday, Jan. 4, 2022, prior to the start of the second session of the 101st General Assembly on Wednesday, Jan. 5. (Julie Smith/News Tribune photo)

The state Capitol could receive half-billion dollars worth of interior renovations during the next decade.

A $535 million master plan created by the Missouri State Capitol Commission could add an annex under the south lawn, a new centralized visitor entrance and a new parking structure, as well as improve office spaces and heating and cooling throughout the Capitol building.

Baker said the House and Senate chambers, as well as most of the public spaces, will remain largely the same, but the master plan calls for some large-scale changes around the building.

The Capitol would also get a new 163,000-square-foot annex under the south lawn. A skylight on the lawn would provide natural light for the hearing rooms and House and Senate research staff offices that would be moved there.

A new visitors entrance would be added under the governor's portico and lead into the basement as well. Baker said the new location is more centralized than the current front entrance and would allow buses to unload more safely.

The project also calls for the construction of a new parking structure where the current Senate garage is, adding 200-300 public parking spaces and more metered parking spots.

"Parking is something which we are in dire need of around the Capitol building," Baker said. "Particularly on days when all of state government is working we don't have adequate parking for our visitors."

House and Senate offices would also be improved.

Baker said the project would be completed in phases with quadrants of the building moving to the proposed annex under the south lawn while work is completed on their section. He said designs and phases of construction would be finalized during the first year of the project if funded.

The plan costs $535 million, Miller told the budget committee, and Baker said it would cost roughly $35 million-40 million in the first year to get the project started. He said the annual cost could spike up to $130 million for some years.

However, the price tag could change if lawmakers choose to peel off certain projects, Miller said.

To accomplish everything, Baker said, the state would be looking at an eight- to 10-year timeline.

"As you're aware, the Band-Aid approach that we see right now that we're using and have been using, it's not working," Miller said. "And we find ourselves doing project after project here -- there was a large HVAC project done this summer here in the basement -- and it's millions of dollars that we're spending, but we're not fixing the root cause. So this plan does that."

The Capitol Commission is responsible for maintaining the condition and historic integrity of the Capitol building.

In 2018, the commission was required by statute to develop a comprehensive master plan for the Capitol and grounds with the goal of addressing environmental issues, aging infrastructure and building accessibility.

Besides the large-scale changes, the $535 million interior renovation project would include several smaller restoration projects and would address environmental and HVAC issues throughout the building, Baker said.

The entire interior of the building would also become fully ADA compliant through the renovation project.

Last year, the state completed a $50 million improvement project on the exterior of the Capitol to preserve the building and improve its appearance, structural stability and water resistance.

The exterior project was not part of the $535 million master plan, Miller said, and the interior master plan projects shouldn't impact any of the capital improvement projects the building has undergone recently or has underway.

Funding for the project is currently undetermined, but could come from a combination of general revenue funds and federal COVID-19 relief dollars.

In addition to presenting the plan to the House Budget Committee, Miller and Baker talked through the plan with the House Subcommittee on Federal Stimulus Spending.

Miller said the Capitol project would be good use of the one-time funds.

"I was hearing the budget director talk about with infrastructure ... one-time investments for the state, and I think this building would qualify under all of those," she said.

The state paid for the exterior Capitol renovation project by issuing bonds. If it were to follow the same process for the interior renovation, Baker said, the state would be looking at a debt service of $50 million for 10 years.