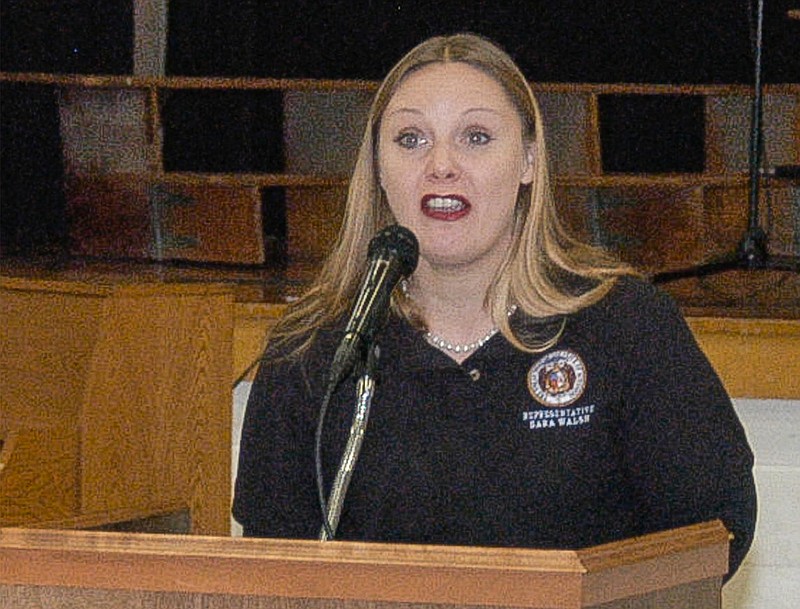 A hearing over a bill that would repeal the standing motor fuel tax lasted for more than four hours Tuesday afternoon as many representatives and witnesses discussed their feelings on the current tax and the effectiveness at which its revenue was being used.

House Bill 1594, sponsored by Rep. Sara Walsh, R-Ashland, would repeal the standing motor fuel tax that began in October 2021, along with the subsequent motor fuel tax increases in current law and the tax exemption for the motor fuel and the refund associated with the exemption.

The current tax on motor fuel started at 2.5 cents in October 2021 and is set to increase 2.5 cents in each fiscal year until reaching an additional 12.5 cents per gallon on July 1, 2025.

"Since last session, Missouri is in an entirely different situation," Walsh said. "Simply put, Missouri is sitting on record revenues to the tune of billions of dollars, that's a billion with a B. So why are we implementing this tax at this time?"

Rep. Raychel Proudie, D- Ferguson, noted this revenue is estimated to be $7.5 billion.

Walsh also added the high level of revenue did not factor in the additional funding the state will receive for infrastructure from the federal government.

"When session first started, we thought it was $5 billion, it's $7.5 billion," Proudie said. "From the federal government's infrastructure bill, it will be $7 billion over the course of five years."

Of the 200 witness forms Walsh received from Missourians regarding the proposed legislation, 136 were in support of the bill.

Proudie noted she did vote in favor of the motor fuel tax during the last session, but she intends to support Walsh's effort to repeal it.

"This is a unique opportunity for us to give money back into the pockets of Missourians who absolutely need a break right now," Proudie said.

Representatives and witnesses at Tuesday's hearing shared their annoyance with the rebate policy passed in the 2021 legislation, saying it was overcomplicated and not accessible to the general public as it requires detailed receipt and data keeping regarding purchases of fuel.

Many present at the hearing also questioned the legality of the current fuel tax under the Hancock Amendment, which has a subsection stating Missouri's General Assembly cannot raise taxes above a certain level in any given year without voter approval.

Some representatives on the subcommittee expressed approval for the bill, while a few shared their concerns that if passed, it would deter infrastructure funding that was needed in addition to the increased funds.

Other representatives supported the repeal of the current motor fuel tax, but questioned if HB 1594 was the most effective way to go about doing so.

The hearing was smooth until two witness testimonies in opposition of the bill from Patrick McKenna, director of MoDOT, and Robert Brinkmann, chairman of the Missouri Highway and Transportation Commission.

Many representatives shared their anger surrounding the recent lawsuit from MoDOT against the state, the effectiveness of the current Missouri Highway and Transportation Commission, where the tax dollars collected would actually go across the state and more.

"I think that is where most of this vitriol is coming from," said Rep. Tony Lovasco, R-O'Fallon. "The proponents of this increase are asking us to go back to our districts and tell our constituents, "You need to hurt. We need to increase your taxes to pay for a road system that you'll never use, and that the vast majority of Missourians don't use and has nothing to do with the commerce that we rely on."