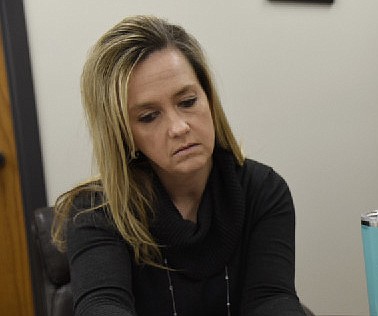 COVID-19 cases and hospitalizations have been trending down for the past few weeks across the state and in Cole County, Health Department Director Kristi Campbell said.

During a Tuesday briefing before the Cole County Commission, Campbell said Capital Region Medical Center had 15-20 COVID-19 patients at its facility Monday and St. Mary's had a few more than Capital Region since it doesn't have post acute care beds to transfer patients to so they are kept in the hospital until those cases could be transferred to nursing homes or other facilities.

"The number of tests given has also been down, which means less people are sick, but the percent of positive cases has also gone down," Campbell said. "We might hear that the positivity rate in the county was 20 percent. What that means is, of the sick people getting tested, 20 percent of those tests are positive."

There is another free COVID-19 testing event 10 a.m.-6 p.m. Sunday at the American Legion parking lot off Tanner Bridge Road; no appointment is necessary. It's sponsored by the Missouri Department of Health and Senior Services.

Campbell and Presiding Commissioner Sam Bushman noted 515 people were tested at the first event in January, but the number dropped to 267 at the second event.

"It seems like we have passed the peak," Campbell said.

Campbell also said they have had some cases of influenza A reported in the county. She said A usually comes first and then influenza B. The influenza season runs from October through March, and Campbell said it's not too late for those wanting to get a flu shot.