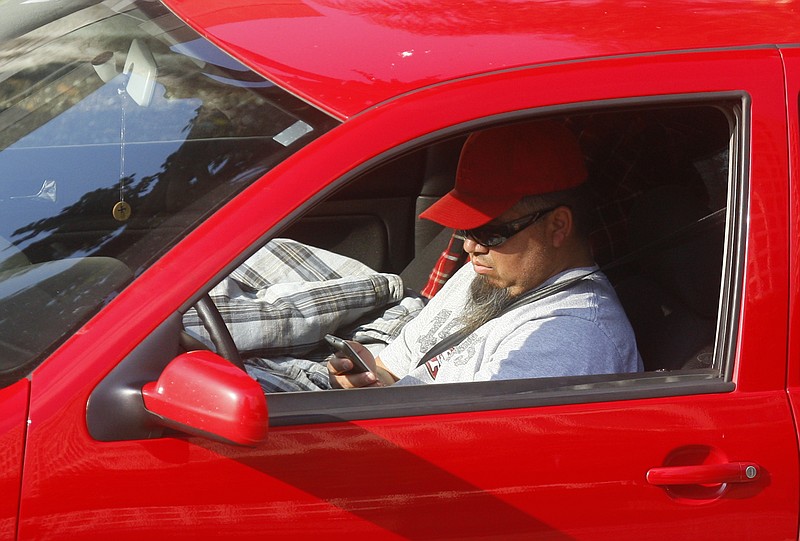 FILE - In this Dec. 14, 2011 file photo, a driver uses a cellphone while driving in Los Angeles. (AP Photo/Damian Dovarganes, File)

After the deadliest year on Missouri highways since 2006, the Missouri Department of Transportation is renewing efforts to get hands-free driving laws on the books.

According to MoDOT's preliminary data, more than 2,200 crashes in the state last year involved drivers using cellphones. The department notes, however, that distracted driving is widely underreported.

In response, MoDOT has made it a legislative priority to universally ban the use of cellphones while driving by supporting legislation working its way through the Missouri Legislature.

In 2009, the state made it illegal for drivers 21 years old and younger to use a cellphone or handheld device to text while on the road.

Robert Brinkmann, chairman of the Missouri Highways and Transportation Commission, said the state needs to take action to expand those restrictions to all drivers.

Forty-eight other states have enacted laws that ban texting while driving, leaving only Missouri and Montana without the restriction for all drivers. Twenty-four states entirely prohibit drivers from using a handheld cellphone.

"It goes without saying we have a lot of work to do," Brinkmann said.

State lawmakers have filed 10 bills related to distracted driving so far this legislative session, and Brinkmann said three -- HB 1701, HB 2229 and SB 713 -- contain language MoDOT and the Coalition for Roadway Safety have recommended.

Of the three bills, SB 713, sponsored by Sen. Greg Razer, D-Kansas City, is farthest along in the legislative process. The bill was referred to the Senate Transportation, Infrastructure and Public Safety Committee on Jan. 10.

Razer's bill would prohibit all cellphone or "electronic wireless communication device" use, unless the device is hands-free and doesn't distract the driver.

The bill's restrictions would also apply to commercial drivers, such as truck drivers, unless they can accomplish the communication by clicking a single button and remaining seated and wearing a seat belt.

It would impose a $50 fine for motorists found using a device and a $100 fine for those found using a phone in a work or school zone. It would also be considered a "serious traffic violation," which would disqualify a commercial driver's license.

Brinkmann said the legislation is critical for establishing an expectation among drivers that they will engage the roadway without being distracted.

John Briscoe, vice chairman of MHTC, said the legislation would also increase safety for pedestrians, bicyclists and motorcyclists, as well as crews working along roadways.

"MoDOT and the commission would like to see the current law expanded to prohibit all drivers from using a handheld electronic communication device for almost any purpose," Briscoe said. "This law change would reduce the number of distracted drivers and provide greater safety for all public and private employees who work alongside the roadway."

He said MoDOT will continue working with a coalition that includes car manufacturers, cellphone providers and hospitals, to support the legislation.

"These concerns are not only shared by MoDOT employees, but private contractors, public works employees, insurance companies and school districts," Brinkmann said.

Hands-free driving is one of the department's many approaches to roadway safety.

For several years, MoDOT has emphasized its Buckle Up Phone Down campaign to remind people to wear a seat belt and avoid using cellphones while driving.

MoDOT Director Patrick McKenna said that program has caught the interest of several other state departments of transportation and their national counterpart, the U.S. Department of Transportation.

"These are preventable," McKenna said. "These are mostly preventable and a lot of it has to do with behavior."