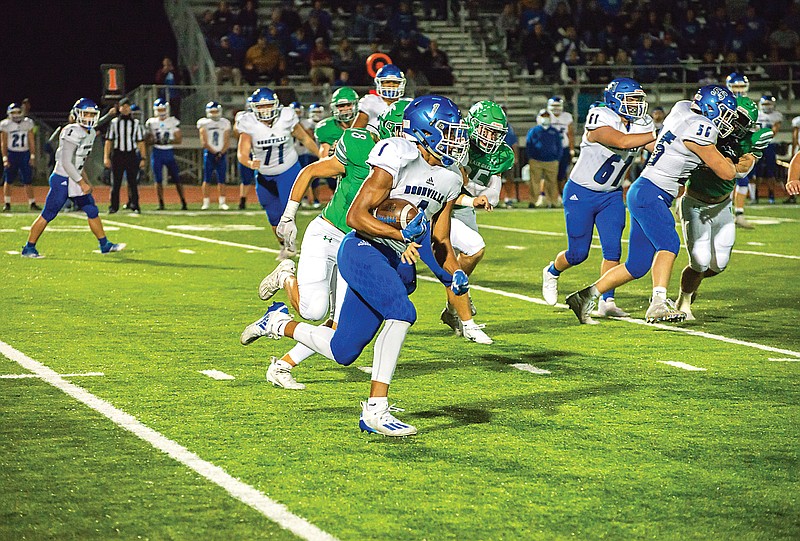 In this Nov. 6, 2020, file photo, Boonville running back DaWan Lomax races to the outside for a gain during a district semifinal game against Blair Oaks at the Falcon Athletic Complex in Wardsville. (Ken Barnes/News Tribune)

Lincoln football coach Jermaine Gales closed out his first recruiting class as coach of the Blue Tigers on Wednesday.

The Blue Tigers were able to get 29 recruits signed on National Signing Day to help Lincoln’s rebuilding efforts.

“I wouldn’t say it was a struggle with joining the recruiting process late,” Gales said. “I would say it was more about time management and being able to navigate the state of Missouri.”

Recruiting in-state was a high priority for Gales, but with the recent struggles of Lincoln football, he knew it was not going to be easy.

“It’s a situation for us that we know that Lincoln has been a little down lately,” he said. “Not everybody wants to be a part of a program that has not had the same product as some of the other programs in the state. So what I have been trying to do is want who wants us. Vetting everybody that sends us film and making sure they would buy into what we are trying to do here. We will let the program do the rest once they are on campus.”

Lincoln was able to succeed in this department, securing 11 recruits from Missouri, including three recruits local to the area: running back DaWan Lomax, wide receiver Michael Buckner and Trevor Myers.

Lomax is a 5-foot-10 and 170 pound back from Boonville that led the Pirates with 1,347 rushing yards and 14 touchdowns. Buckner is a 6-3, 175-pound wideout that was a dynamic player for Tipton and Myers is another 6-3 receiver from California that was also effective as a defensive end in high school.

“I think it is very important for a state school to have in-state student-athletes be apart of their team,” Gales said. “Not only for a support aspects, but for the young student-athletes as well. When they come into Lincoln, they have the opportunity to showcase their talents in front of their friends and families who won’t have to drive six hours to watch them compete.”

Some other in-state recruits that Gales highlighted are wide receivers Armani Turner (5-8, 165) from Hazlewood Central and Kevon Jacobs (5-8, 170) from Lutheran North.

“Armani Turner is a dynamic young man who knows what to do when he has the ball in his hands,” Gales said. “…When you think about the term ‘dynamite comes in small packages,’ Armani is the type of guy that you think about.

“Another guy of the same build and the same type of player is Kevon Jacobs. Both of those young men I expect to come in and compete to touch the field their first year. I am not in the situation where I am trying to bring guys in to redshirt. I am trying to bring guys in that are going to push the guys that are already here and we are going to put the best 11 guys on the field. If we get in the position where there is a small gap between our 1’s and our 2’s and are able to build that depth, that we will be in a pretty good spot.”

Lincoln was able to snag a 6-foot-2, 170-pound quarterback out of Festus in Cole Rickerman. Gales believes Rickerman could help out the Blue Tigers soon.

“Cole Rickerman is a quarterback that can spin it a little bit,” Gales said. “I enjoy what he brings to the table as far as skill set. He is just sneaky enough to get you out of trouble with his feet, but he can really throw the rock around the yard. I am excited to see what he can do getting him prepared for this next season.”

On the other side of the ball, Gales was looking for versatility and athleticism. He was able to do this with adding guys like Ian Hackney, a 6-1, 215-pound linebacker out of Georgia, and Cryris Davis, a 6-2, 185-pound defensive back out of O’Fallon Township (Ill.).

Gales knows his first recruiting class is only step one in rebuilding Lincoln football.

“I believe that Lincoln University already has the type of athletes we need on campus,” he said. “Preparing for spring ball and getting the young men that are already here ready to go and implementing the new class will go a long way in the future climb of Lincoln University football.”

Gales expects this recruiting class to get bigger as signed letters of intent are still waiting out there.

“My magic number is between 30 and 40,” he said. “I don’t know if we will get there by the end of the night because guys take time to do their due dilligence before signing, which is totally understandable. The 29 men we have inked right now are the 29 we are going to go to war with.”