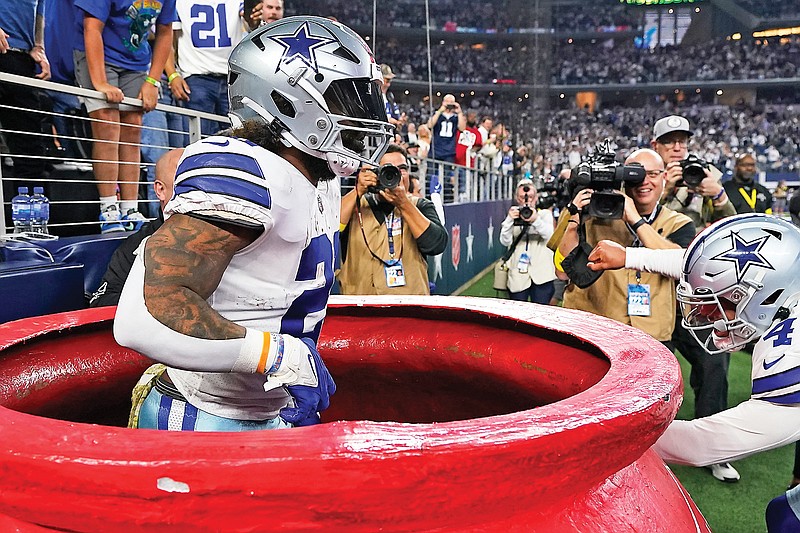 Cowboys running back Ezekiel Elliott celebrates a touchdown run during the second half of Sunday night’s game against the Colts in Arlington, Texas. (Associated Press)

ARLINGTON, Texas -- Malik Hooker returned a fumble 38 yards for a touchdown against his former team Sunday night during a 33-point fourth quarter for Dallas, propelling the Cowboys to a 54-19 rout of the Indianapolis Colts.

Dallas led 21-19 entering the fourth when Dak Prescott threw the last of his three touchdown passes. Hooker’s scoop-and-score was the first of four fourth-quarter takeaways by Dallas, all of which led to touchdowns.

The highest-scoring quarter for the Cowboys (9-3) since at least 1991 was just the third time in NFL history a team scored as many as 33 points in the fourth.

Matt Ryan threw his second and third interceptions and lost a fumble during the nightmare finish for the Colts (4-8-1), who fell to 1-3 under interim coach Jeff Saturday and lost for the sixth time in seven games overall.

Ryan, who threw two touchdown passes, has 18 giveaways this season (13 interceptions, five lost fumbles) to lead the NFL by three ahead of Buffalo quarterback Josh Allen.

Michael Gallup had two touchdown catches and CeeDee Lamb the other for the Cowboys, who remained two games behind NFL-leading Philadelphia in the NFC East.

The 49ers (8-4) allowed a 75-yard touchdown pass to Trent Sherfield on the opening play from scrimmage but little else until the fourth quarter against a high-powered attack for Miami (8-4) that had scored at least 30 points in four straight games.

Tagovailoa threw a 45-yard TD pass to Tyreek Hill in the opening minute of the fourth quarter, but the Niners held on from there. They capped the performance with a strip-sack from Nick Bosa that Dre Greenlaw returned for a 23-yard score.

The Dolphins had their five-game winning streak snapped in coach Mike McDaniel’s first game against the 49ers after spending the past five years as an assistant in San Francisco.

Garoppolo hurt his foot on a sack on the final play of the opening drive. Purdy capped his first drive of the game by throwing a 3-yard TD pass to Kyle Juszczyk to give San Francisco a 10-7 lead.

He then led a well-executed two-minute drive at the end of the half, completing six passes for 75 yards with a 3-yard TD to Christian McCaffrey with 4 seconds left in the half to make it 17-10.

EAST RUTHERFORD, N.J. -- Graham Gano came up well short on a 58-yard field-goal attempt on the last play of overtime, and New York and Washington tied.

Heinicke was 27-of-41 for 275 yards and threw touchdown passes of 19 yards to Terry McLaurin (eight catches, 105 yards) and 28 yards to Jahan Dotson that tied it with 1:45 to play. That drive featured Heinicke rolling to his left to hit Curtis Samuel for 20 yards on a fourth-and-4 play from his own 27 with less than three minutes to play.

New York’s defense set up Hodgins’ first NFL touchdown early in the second half for a 20-13 lead. Azeez Ojulari sacked Heinicke and forced a fumble. Oshane Ximines recovered but also fumbled, and Ojulari ultimately collected the ball at the Washington 20.

Jackson left after the first quarter with an injured knee, and the Broncos mostly shut down Baltimore after that. But on their final possession, the Ravens drove 16 plays, aided by a couple big Denver penalties. Huntley converted on fourth-and-2 from the Denver 18 with a short run, then Kenyan Drake caught a 13-yard pass.

Huntley scored on the next play for the Ravens (8-4), who stayed atop the AFC North.

Russell Wilson led the Broncos (3-9) back into Baltimore territory, but Brandon McManus came up short on a 63-yard field goal as time expired.

Denver’s offense couldn’t shake out of its season-long funk, and three field goals by McManus weren’t enough. The Broncos have lost four straight, scoring only 45 points in that span.

Jackson left after being sacked by Jonathon Cooper on the last play of the first quarter. The 2019 MVP exited the sideline tent, walked to the tunnel and didn’t return. Huntley went 27-of-32 for 187 yards with an interception.

MINNEAPOLIS -- Justin Jefferson’s touchdown catch with 8:33 left gave Minnesota enough of a lead to hang on despite a relentless rally by New York.

Camryn Bynum’s interception at the 1-yard line with 10 seconds left finally sealed it for the Vikings (10-2), who completed a four-game sweep of the AFC East in their typical nail-biting fashion.

With 1:43 remaining, White’s fourth-and-goal pass from the 1 was incomplete when Braxton Berrios bobbled it and the ball hit the turf. The Jets had all three timeouts left and got the ball back at the Minnesota 43, but with White under plenty of pressure they stalled out at the 19.

Dalvin Cook and Alexander Mattison rushed for first-half touchdowns and Greg Joseph made two field goals for the Vikings, who took a 20-3 lead late in the second quarter.

But Minnesota netted 10 yards on three third-quarter possessions and ended up in its ninth one-score game of the season. The Vikings missed some crucial tackles and allowed three plays of 30-plus yards in the final 15 minutes to aid the rally.

HOUSTON -- Deshaun Watson had a sloppy performance in his first game in 700 days, but a punt return for a touchdown by Donovan Peoples-Jones and two defensive TDs were enough for Cleveland to beat lowly Houston.

In the same stadium where he played his previous game, a rusty Watson threw for 131 yards with an interception in his debut for the Browns (5-7) against his former team in his return after serving an 11-game NFL suspension for sexual misconduct allegations.

The Browns trailed 5-0 early but a 76-yard punt return by Peoples-Jones put them on top in the second quarter and Denzel Ward’s 4-yard fumble return for a score pushed the lead to 14-5 early in the third quarter.

Cleveland didn’t score on offense until a 43-yard field goal made it 17-8 with about 10 minutes remaining. The Browns added a second defensive score when Tony Fields intercepted Kyle Allen and returned it 16 yards on the next play. The Texans (1-10-1) lost their seventh straight.

Allen had a terrible day in his second start since Davis Mills was benched. He threw for 201 yards with a fumble that was returned for a touchdown and two interceptions.

PHILADELPHIA -- Jalen Hurts strengthened his MVP bid by throwing for 380 yards and three touchdowns and running for another score, and A.J Brown caught two touchdown passes against his former team as Philadelphia beat Tennessee.

Hurts has led the Eagles to an 11-1 start, their first time with that record since 2004 and the fourth time in franchise history. The 1949 Eagles won the NFL championship. The 1980 and 2004 teams lost in the Super Bowl.

The speedy, sure-armed QB set a career high with 29 total touchdowns and had his third career game with four total TDs. His first half alone was a pretty good game for most quarterbacks: 268 yards passing and two touchdowns with one rushing score.

The Eagles’ defense was first-rate, too, bottling up Derrick Henry -- who had 11 carries for 30 yards -- and limiting Ryan Tannehill to 141 yards passing and a touchdown. The Titans (7-5) lost their second straight but still have a comfortable lead in the AFC South.

After a field goal got Tennessee within 14-10 late in the second quarter, the Titans punted on five straight possessions before turning it over on downs.

The Packers (5-8) looked like they were on their way to another loss after dropping seven of eight, trailing 19-10 through three quarters. But they made enough plays down the stretch to come away with their eighth straight win against the Bears (3-10), who lost their sixth straight.

AJ Dillon ran for a 21-yard touchdown in the opening minute of the fourth and Mason Crosby kicked a 32-yard field goal to give Green Bay a 20-19 lead with just under five minutes left.

The Bears drove to the Packers 33 before Jaire Alexander stepped in front of Justin Fields’ pass intended for Equanimeous St. Brown and picked it off. Three plays later, Watson sprinted untouched to the end zone, and Rodgers completed a 2-point conversion pass to Mercedes Lewis. That made it 28-19 with 1:51 remaining.

Rodgers improved to 25-5 against Chicago counting the playoffs. The four-time MVP completed 18-of-31 passes for 182 yards and a touchdown.

Fields had a 55-yard touchdown run and finished with 71 rushing yards on six attempts, his sixth straight game with at least 50 rushing yards and a TD. He was 20-of-25 passing for 254 yards but threw two interceptions.

Smith passed for a career-high 367 yards and threw three TD passes for the Seahawks (7-5), who barely snapped their two-game skid with 438 yards of offense against a Rams defense missing Aaron Donald.

After Cam Akers’ second TD run put the Rams up 23-20 with 2:56 to play, Smith patiently directed the winning 75-yard drive, hitting Marquise Goodwin for 17 yards one play before finding Metcalf between defenders in the end zone.

Tyler Lockett and Noah Fant caught early TD passes from Smith in the most prolific game of the quarterback’s decade in the NFL. Metcalf had eight catches for 127 yards, and Lockett had nine receptions for a season-high 128 yards as the Seahawks sent defending Super Bowl champion Los Angeles (3-9) to its sixth straight defeat.

Wagner had two sacks and an interception for the Rams in his first career game against Seattle, where he spent the previous 10 years and made six All-Pro teams.

John Wolford passed for 178 yards with two interceptions for the Rams, who are ensured their first losing season in coach Sean McVay’s six-year tenure.

Los Angeles led 10-0 in the second quarter but the Raiders dominated from there. Carr completed a 31-yarder to Adams early in the third quarter to give Las Vegas the lead for good at 17-13. Less than four minutes later, the duo hooked up on a 45-yard flea flicker for another score.

The Lions (5-7) scored on all five of their drives in the first half to take a 17-point lead, and then on their first three possessions of the second half to pull away.

The Jaguars (4-8) had a scare on the last play of the second quarter when quarterback Trevor Lawrence was sacked and grabbed his left knee, but their defense made his return moot.

Lawrence was taken out in the fourth quarter with his team trailing by 26 points. He finished 17-of-31 for 179 yards with a touchdown.

Amon-Ra St. Brown had 11 receptions for 114 yards and two touchdowns. D’Andre Swift rushed for 62 yards and a touchdown for the Lions.

Coming off a Monday night victory at Indianapolis, the Steelers (5-7) won two straight games for the first time during what’s been a tough rebuilding year.

The Falcons (5-8) had first-and goal from the Steelers 10 with a chance for a go-ahead touchdown. But a holding penalty on Parker Hesse wiped out Cordarrelle Patterson’s apparent TD run around left end, and the Falcons wound up settling for Younghoe Koo’s third field goal of the day from 28 yards with 5:27 remaining.

The Steelers ran off all but the final 42 seconds before Pressley Harvin pinned a punt at the Falcons 2-yard line. In desperation mode with no timeouts remaining, Marcus Mariota’s pass was picked off by Minkah Fitzpatrick to seal it.

Pickett’s touchdown pass to Heyward came midway through the second quarter, set up by a 57-yard completion to Pat Freiermiuth.

Wright connected from 46, 46, 48 and 38 yards. Pickett threw for 197 yards without an interception, and Najee Harris had 86 yards rushing.