Santa's back in town with inflation, inclusion on his mind 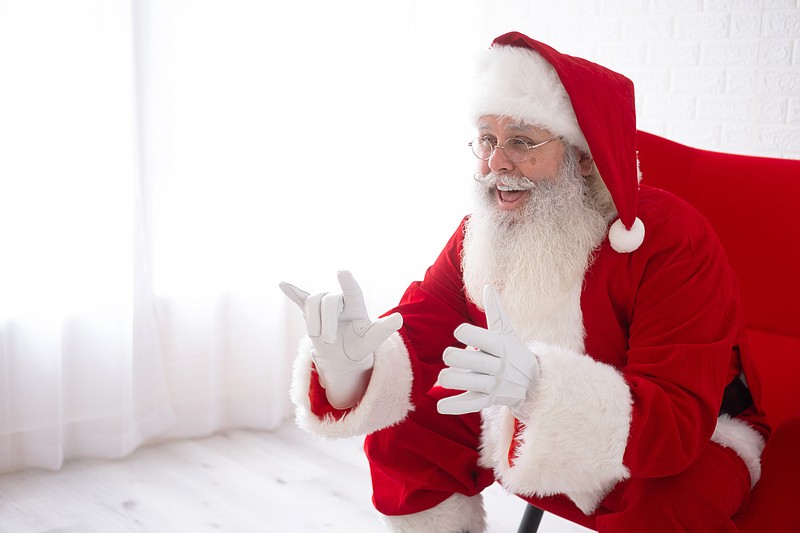 This photo shows Charles Graves dressed as Santa Claus in Austin, Texas on on Sept. 3, 2022. Graves is a rare Deaf Santa in his first year donning the red suit as a professional. (Michael J. Samaripa via AP)

NEW YORK (AP) -- Don't look for plastic partitions or faraway benches when visiting Santa Claus this year. The jolly old elf is back, pre-pandemic style, and he's got some pressing issues on his mind.

Santa booker HireSanta.com has logged a 30% increase in demand this Christmas season over last year, after losing about 15% of its performers to retirement or death during the pandemic, said founder and head elf Mitch Allen.

He has a Santa database of several thousand with gigs at the Bloomingdale's flagship store in New York, various Marriott properties and other venues around the U.S. Most of Allen's clients have moved back to kids on laps and aren't considering COVID-19 in a major way, he said, but Santa can choose to mask up.

Another large Santa agency, Cherry Hill Programs, is back up to pre-pandemic booking numbers for their 1,400 or so Santas working at more than 600 malls and other spots this year, said spokesperson Chris Landtroop.

"I can't even explain how excited we are to see everyone's smiles at all locations this season without anything covering up those beautiful faces," she said.

Among standout Santas still keeping their distance? There will be no lap visits at the Macy's flagship store in New York's Herald Square. Santa is seated behind his desk.

Some Santas who stayed home the last two years out of concern for their health have returned to the ho ho ho game, but Allen is desperately trying to refill his pipeline with new performers.

Inflation has also taken a bite out of Santa. Many are older, on fixed incomes and travel long distances to don the red suit. They spend hundreds on their costumes and other accoutrements.

Bookings for many Santas were made months in advance, and some work year-round. Allen's Santas will earn from $5,000 to $12,000 for the season.

A few Santas told The Associated Press they're unbothered by the cost, however. They're not in the Santa profession to make a buck but do it out of sheer joy.

Allen and other agencies are juggling more requests for inclusive Santas, such as Black, deaf and Spanish-speaking performers. Allen also has a female Santa on speed dial.

"I haven't been busted yet by the kids and, with one exception, by the parents, either," said 48-year-old Melissa Rickard, who stepped into the role in her early 20s when the Santa hired by her father's lodge fell ill.

"To have a child not be able to tell I'm a woman in one sense is the ultimate compliment because it means I'm doing Santa justice. It cracks my husband up," added Rickard, who lives outside Little Rock, Arkansas. "I know there are more of us out there."

By mid-November, Rickard had more than 100 gigs lined up, through Hire Santa and other means.

Rickard charges roughly $175 an hour as Santa, depending on the job, and donates all but her fuel money to charity. And her beard? Yak hair.

Eric Elliott's carefully tended white beard is the real deal. He and his Mrs. Claus, wife Moeisha Elliott, went pro this year after first taking on the roles as volunteers in 2007. Both are retired military.

They spent weeks in formal Claus training. Among the skills they picked up was American Sign Language and other ways to accommodate people with disabilities. Their work has included trips into disaster zones with the Texas-based nonprofit Lone Star Santas to lend a little cheer.

The Elliotts, who are Black, say breaking into the top tier of Santas as first-time pros and Clauses of color hasn't been easy. For some people, Eric said, "We understand that we're not the Santa for you."

The Santa Experience at Mall of America in Bloomington, Minnesota, is staffing up with six Saint Nicks, including two who are Black and its first Asian Santa. Visits in Spanish and Cantonese are provided.

Working smaller jobs, including house visits, the Elliotts have seen how rising prices have hit some people hard. They've lowered their rates at times when they sense that people are struggling.

"People are having issues just eating, but they don't want to miss out on the experience," Eric said. Sometimes, he said, "You'll meet them and be like, `You go ahead and hold on to that. I know you worked hard for that.'"

For other clients, the Elliotts charge anywhere from $150 to $300 an hour.

Charles Graves, a rare, professional deaf Santa in New Braunfels, Texas, said through an interpreter that he was inspired to grow his beard and put on the suit in part by awkward encounters with hearing Santas as a child.

"As a child, I was very excited to receive a gift, but then you just kind of go away and you're like, there's no connection there. Children look at me now and they're like, wow, you know, there's a connection there with the deaf culture. And I can always connect with the hearing kids as well," said Graves, a spry Santa at 52.

Graves, who has a day job at a school for deaf children, also received training to be Santa. He works as Santa with interpreters. Breaking in has been difficult and expensive, he says, but "this is something really, really important to me."

By mid-November, he had more than a dozen gigs, including a parade in Santa Paula, California, a mall in Austin, Texas, and at Morgan's Wonderland, a nonprofit accessible theme park in San Antonio. He's also doing some Zoom visits.

Among Santa's rising costs this year are his duds. The price of suits, from custom to ready-to-wear, is up about 25%, said 72-year-old Stephen Arnold, a longtime Santa who heads the more than 2,000-strong International Brotherhood of Real Bearded Santas.

"Most of the performers I know are raising their rates, mostly due to the costs of transportation, accommodation and materials," he said. "Personally, I'm raising my rates a bit for new clients but I'm holding prices this year for my repeat gigs."

Arnold, who's in Memphis, Tennessee, charges $250 to $350 an hour. Others in his organization, depending on location and experience, charge anywhere from $100 to $500 an hour, the latter in big cities like Los Angeles. Some, he said, don't know their worth and lowball it at $50 or $75 an hour.

As for the pandemic, Arnold hasn't heard a word about it from his clients, compared to last year and 2020, when he worked inside a snow globe. The Santas he knows seem unflustered.

"I'm surprised how few people are concerned about it," Arnold said. "I visit my wife twice a day in a nursing facility. I'm diabetic. I mean, most of us are old fat men." 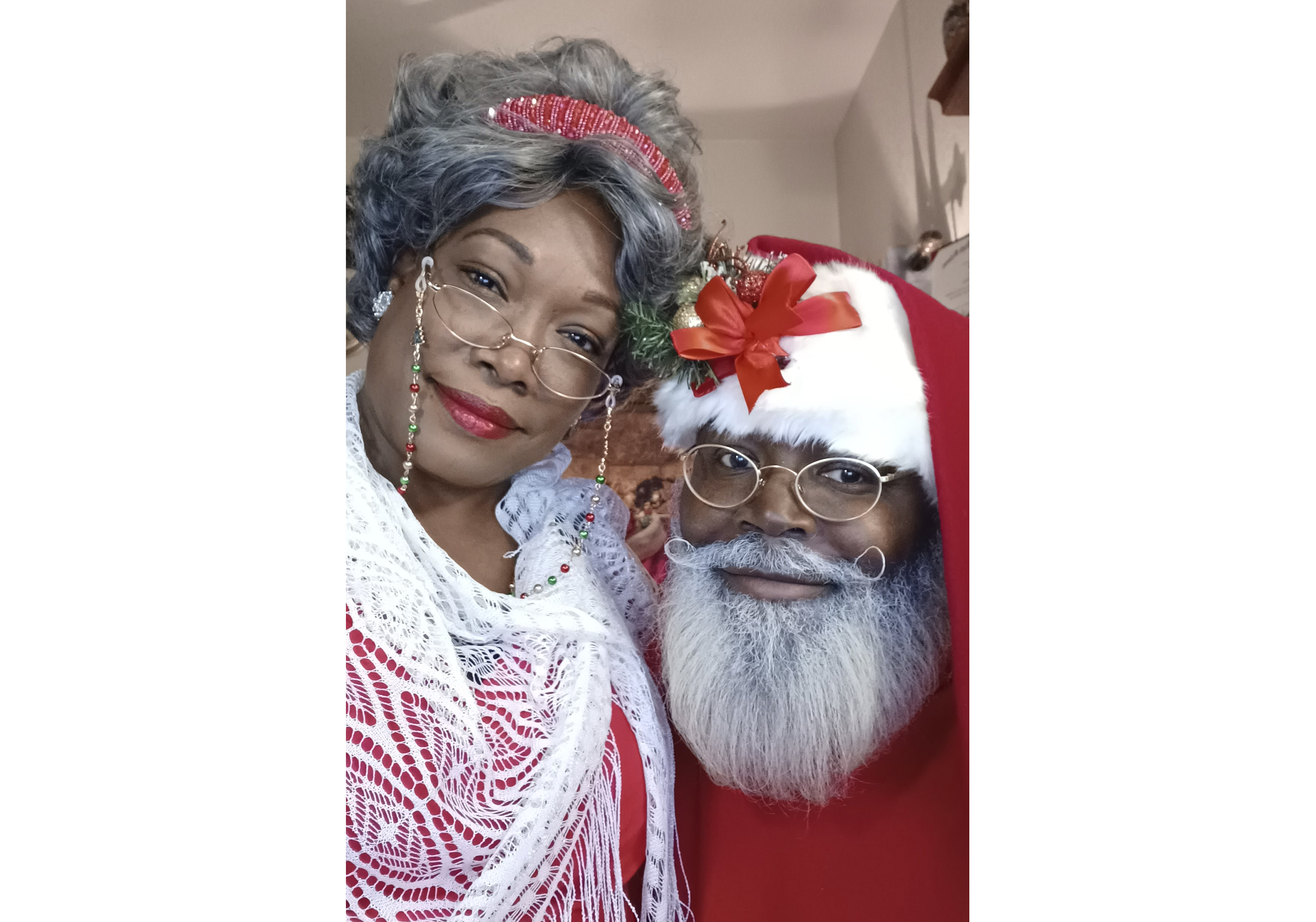 This photo shows Eric Elliott and his wife, Moeisha Elliott, at home in Killeen, Texas, on Oct. 29, 2022. The Elliotts have invested in months of professional training to play Santa and Mrs. Claus but said some prospective clients aren’t looking for Black performers. (Eric Rex Elliott via AP)

Print Headline: Santa's back in town with inflation, inclusion on his mind