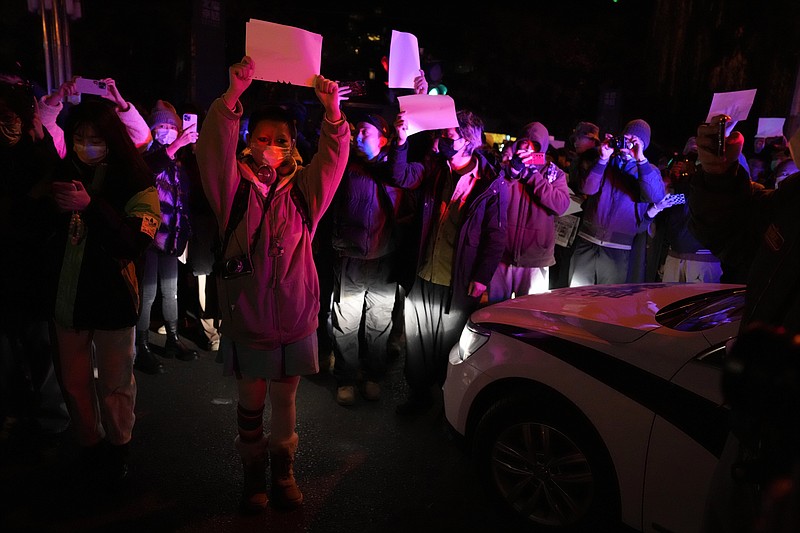 Protesters hold up blank papers and chant slogans as they march in protest in Beijing, Sunday, Nov. 27, 2022. Protesters angered by strict anti-virus measures called for China's powerful leader to resign, an unprecedented rebuke as authorities in at least eight cities struggled to suppress demonstrations Sunday that represent a rare direct challenge to the ruling Communist Party. (AP Photo/Ng Han Guan)

HONG KONG (AP) -- Videos of hundreds protesting in Shanghai started to appear on WeChat on Saturday night. Showing chants about removing COVID-19 restrictions and demanding freedom, they would stay up only a few minutes before being censored.

Elliot Wang, a 26-year-old in Beijing, was amazed.

"I started refreshing constantly, and saving videos, and taking screenshots of what I could before it got censored," said Wang, who only agreed to be quoted using his English name, in fear of government retaliation. "A lot of my friends were sharing the videos of the protests in Shanghai. I shared them too, but they would get taken down quickly."

That Wang was able to glimpse the extraordinary outpouring of grievances highlights the cat-and-mouse game that goes on between millions of Chinese internet users and the country's gargantuan censorship machine.

Chinese authorities maintain a tight grip on the country's internet via a complex, multi-layered censorship operation that blocks access to almost all foreign news and social media, and blocks topics and keywords considered politically sensitive or detrimental to the Chinese Communist Party's rule. Videos of or calls to protest are usually deleted immediately.

But images of protests began to spread on WeChat, a ubiquitous Chinese social networking platform used by more than 1 billion, in the wake of a deadly fire Nov. 24 in the northwestern city of Urumqi. Many suspected that lockdown measures prevented residents from escaping the flames, something the government denies.

The sheer number of unhappy Chinese users who took to the Chinese internet to express their frustration, together with the methods they used to evade censors, led to a brief period of time in which government censors were overwhelmed, according to Han Rongbin, an associate professor at the University of Georgia's International Affairs department.

"It takes censors some time to study what is happening and to add that to their portfolio in terms of censorship, so it's a learning process for the government on how to conduct censorship effectively," Han said.

In 2020, the death from COVID-19 of Li Wenliang, a doctor who was arrested for allegedly spreading rumors following an attempt to alert others about a "SARS-like" virus, sparked widespread outrage and an outpouring of anger against the Chinese censorship system. Users posted criticism for hours before censors moved to delete posts.

"Chinese netizens have always been very creative because every idea used successfully once will be discovered by censors the next time," said Liu Lipeng, a censor-turned-critic of China's censorship practices.

Others posted sarcastic messages like "Good good good sure sure sure right right right yes yes yes," or used Chinese homonyms to evoke calls for President Xi Jinping to resign, such as "shrimp moss," which sounds like the words for "step down," and "banana peel," which has the same initials as Xi's name.

But within days, censors moved to contain images of white paper. They would have used a range of tools, said Chauncey Jung, a policy analyst who previously worked for several Chinese internet companies based in Beijing.

Most content censorship is not done by the state, Jung said, but outsourced to content moderation operations at private social media platforms, who use a mix of humans and AI. Some censored posts are not deleted, but may be made visible only to the author, or removed from search results. In some cases, posts with sensitive key phrases may be published after review.

A search on Weibo on Thursday for the term "white paper" mostly turned up posts that were critical of the protests, with no images of a single sheet of blank paper, or of people holding white papers at protests.

It's possible to access the global internet from China by using virtual private networks that disguise internet traffic, but these systems are illegal and many Chinese internet users access only the domestic internet. Wang does not use a VPN.

"I think I can say for all the mainlanders in my generation that we are really excited," Wang said. "But we're also really disappointed because we can't do anything. ... They just keep censoring, keep deleting, and even releasing fake accounts to praise the cops."

But the system works well enough to stop many users from ever seeing them. When protests broke out across China over the weekend, Carmen Ou, who lives in Beijing, initially didn't notice.

"I tried looking at my feed on WeChat, but there was no mention of any protests," she said. "If not for a VPN and access to Instagram, I might not have found out that such a monumental event had taken place."

Han, the international affairs professor, said censorship "doesn't have to be perfect to be effective."

"Censorship might be functioning to prevent a big enough size of the population from accessing the critical information to be mobilized," he said.

China's opaque approach to tamping down the spread of online dissent also makes it difficult to distinguish government campaigns from ordinary spam.

Searching Twitter using the Chinese words for Shanghai or other Chinese cities reveals protest videos, but also a near-constant flood of new posts showing racy photos of young women. Some researchers proposed that a state-backed campaign could be seeking to drown out news of the protests with "not safe for work" content.

A preliminary analysis by the Stanford Internet Observatory found lots of spam but no "compelling evidence" that it was specifically intended to suppress information or dissent, said Stanford data architect David Thiel.

"I'd be skeptical of anyone claiming clear evidence of government attribution," Thiel said in an email.

Israeli data analysis firm Cyabra and another research group that shared analysis with the AP said it was hard to distinguish between a deliberate attempt to drown out protest information sought by the Chinese diaspora and a run-of-the-mill commercial spam campaign.

Twitter didn't respond to a request for comment. It hasn't answered media inquiries since billionaire Elon Musk took over the platform in late October and cut back much of its workforce, including many of those tasked with moderating spam and other content. Musk often tweets about how he's enacting or enforcing new Twitter content rules but hasn't commented on the recent protests in China. 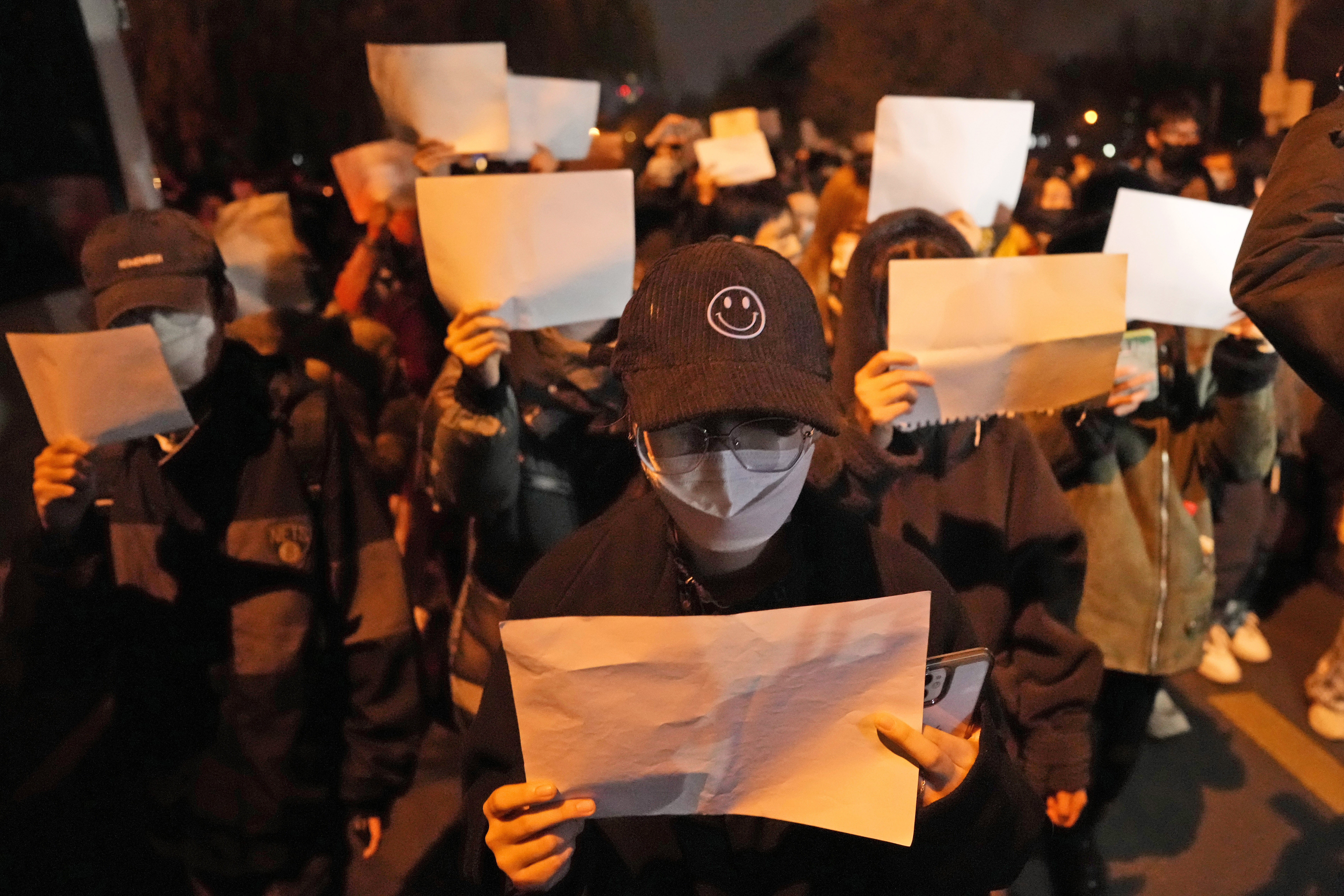 FILE - Protesters hold up blank papers and chant slogans as they march in protest in Beijing, Sunday, Nov. 27, 2022. In a society where everything is closely monitored and censored, the white paper is a silent protest against users not being allowed to speak. (AP Photo/Ng Han Guan, File) 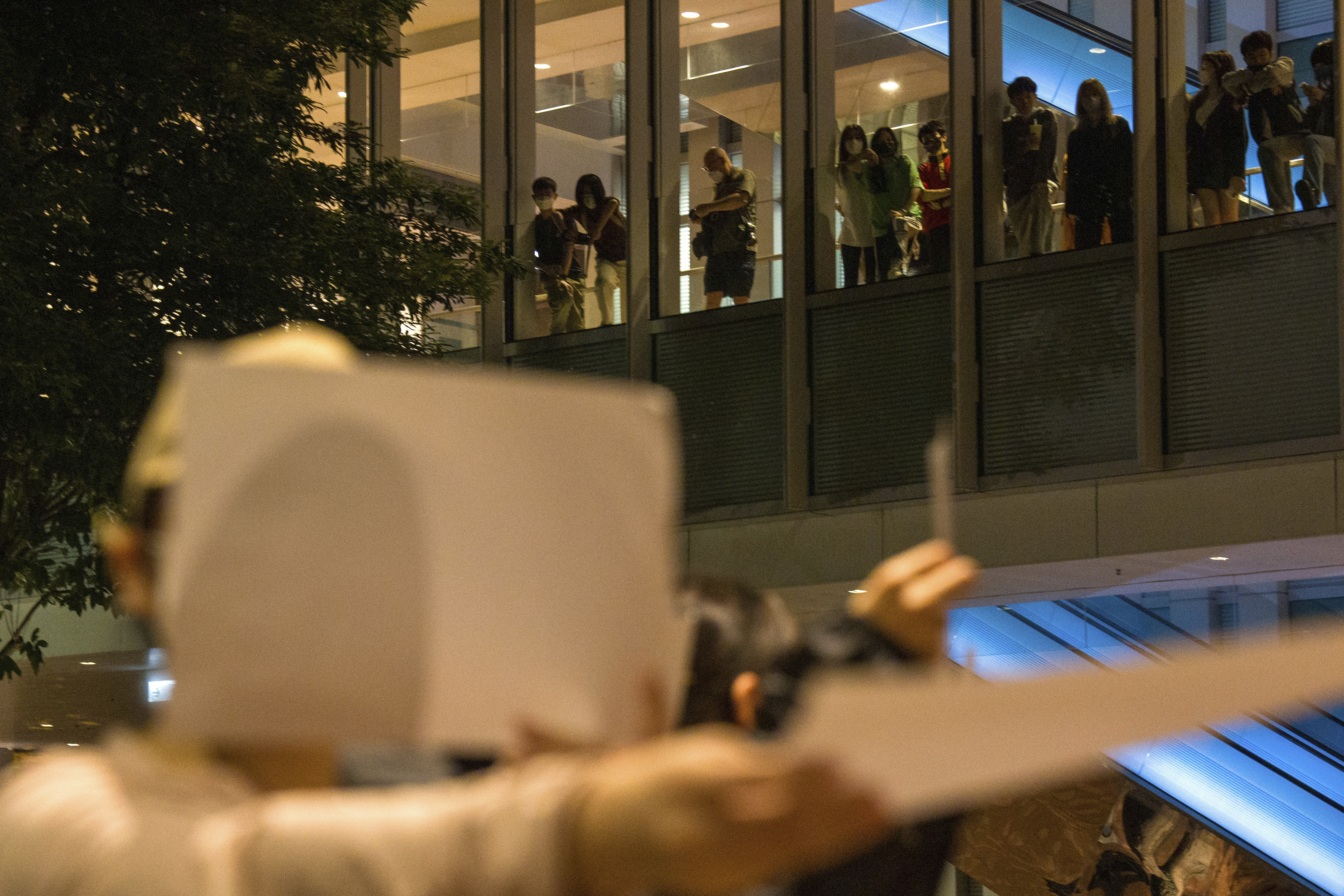