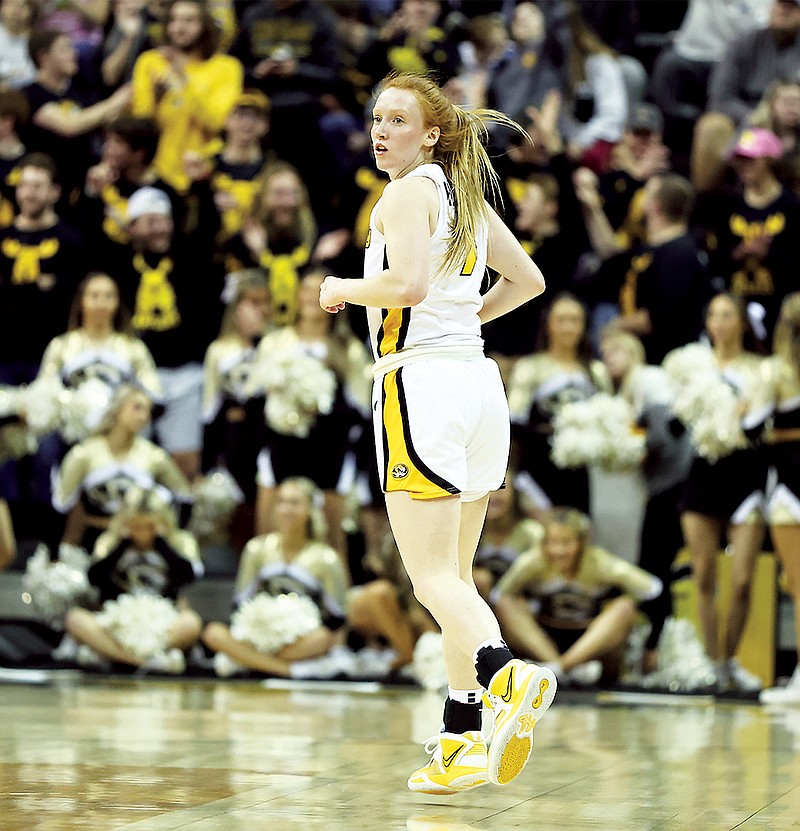 Lauren Hansen of Missouri looks down the court during Wednesday night's game against Saint Louis at Mizzou Arena in Columbia. (Courtesy of Mizzou Athletics)

Hansen hit consecutive 3-pointers, two of her six, to start a 9-0 Missouri run in the first quarter, giving the Tigers the lead they would not give up on the way to an 82-52 win Wednesday night against the Saint Louis Billikens at Mizzou Arena.

“Mama (Dembele) did a great job finding me in transition,” Hansen said. “So did (Haley) Troup. Just getting open looks, it was just working.”

After Hansen’s 3s started the run, Dembele turned one of her three steals into a layup to put the Tigers up 16-8, then Ashton Judd hit a free throw to complete the 9-0 run with 2:02 left in the first quarter.

Hayley Frank hit a 3, one of her four 3s and three of her 14 points, with 18 seconds left in the first quarter to send the Tigers into the first break with a 22-14 advantage.

Troup then opened the second quarter with a 3, before Sarah Linthacum connected on a layup, Sara-Rose Smith nailed a 3 and Dembele turned a turnover into a layup to extend the Tiger lead to 32-14 before the Billikens could get on the board in the second quarter.

SLU held Missouri scoreless for nearly the next five minutes, but the Tigers ended the half on a 5-0 run after a Hansen second-chance 3 with 45 seconds to go and a Micah Linthacum offensive board and putback at the buzzer.

Micah Linthacum’s layup sent the Tigers into halftime up 37-19.

“Defensively, for the most part, there were stretches we looked really good,” Pingeton said. “There were possessions we let people get away from us.”

Hansen led Missouri to a 20-point lead for the first time with a mid-range jumper to open the second half, then the Tigers extended to a 25-point lead with 7:21 left in the third after another Dembele steal-turned-layup.

“Probably the most frustrating piece was the turnovers that we had tonight,” Pingeton said. “We played Wake Forest with nine and Virginia Tech, I believe, with 12, that’s an area, we can’t afford to give up those possessions.”

Missouri was 0-for-6 in the scoreless stretch, but ended the quarter on a 9-0 run after two Hansen 3s and a Frank 3.

The Tigers maintained a 25-point lead or more through the fourth quarter. Missouri connected on 30-of-63 (47.6 percent) shots from the floor, led by Hansen, Frank and Jayla Kelly all reaching double digits. Kelly scored 11 points on 3-of-6 shooting with five made free throws, but had to be helped off the court late in the fourth quarter with an apparent ankle injury.

“It was nice to see the ball finally fall for us,” Pingeton said. “I thought it was just a matter of time. We know we’ve got players who can knock down shots.”

Troup led the way for Missouri with six assists, while Dembele had five.

“I feel like I’m really quick and sometimes I just trust that,” Dembele said. “But honestly what gives me strength is stopping and looking at the court and I have that second to stop and look for my shooters. I have amazing shooters on this team.”

Frank, Smith and Sarah Linthacum all reached five rebounds for the Tigers, with Linthacum adding six points mostly off putbacks on offensive boards.

“I really want to highlight Sarah Linthacum,” Pingeton said. “She works her tail off. She’s maybe not the most athletic kid, maybe not the tallest kid to play inside, but she just competes and she works so hard. Whatever we need her to do, there’s no ego, there’s no agenda, she’s just all in for whatever the front of the jersey needs.”

“I would say the same thing with Micah, too,” Pingeton said. “Unfortunately she’s battled some injuries and didn’t have much of an offseason. … She’s just getting back and we just keep telling her we need her. We need her size, we need her rebounding, she spreads the court a little bit. You haven’t seen her shoot it a lot, but she shoots it well from the 3-point line. We need to keep evolving and keep getting them more minutes and more reps because I think it’s going to be huge later on.”

Missouri (7-1) hits the road to the Arizona State Classic where the Tigers will play UMass at 4 p.m. Saturday and Arizona State at 1:30 p.m. Sunday.