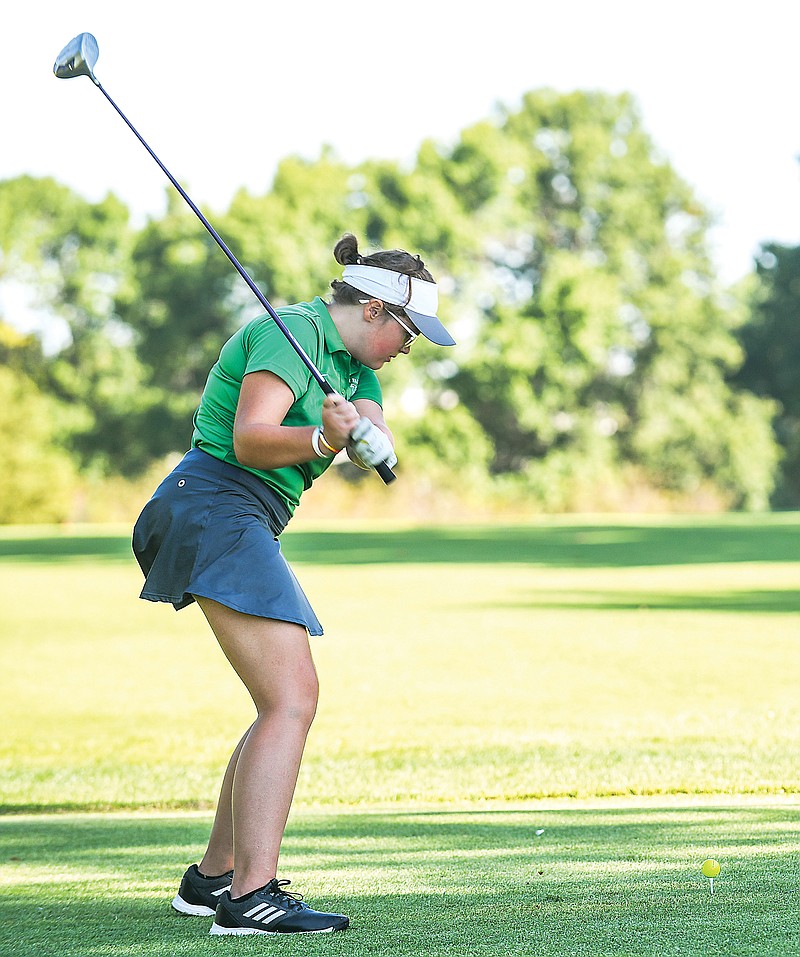 There are a lot of new faces on the Blair Oaks girls golf team, for players and coaches.

So the three weeks of preseason practice were more than just getting back on the course, it was an opportunity for everyone to get to know one another.

“We’re building from the ground level,” Blair Oaks coach Emily Kempker said, as the Lady Falcons begin their season with a triangular today against California and South Callaway at the Oak Hills Golf Center.

Blair Oaks has 10 golfers on its roster, including six freshmen. The Lady Falcons also have two new coaches with Kempker and Tabatha Lenzini.

“A lot of the freshmen are new to golf,” Kempker said. “We’re going to give them a lot of opportunities to see a lot of growth.”

“They’ll gain a lot of experience this year,” Lenzini said.

Senior Emma Scruggs is the lone upperclassman on the roster.

Sophomores Addison Branum, Lauren Brooks and Lily Stegeman all played varsity last season and got to compete in the district tournament.

“Having that experience on the course will help them grow even further,” Lenzini said.

Those four, plus freshman Kylea Kempker, will be the varsity golfers in today’s triangular, one of two home meets for Blair Oaks.

The remaining five freshmen on the roster are Emma Kliethermes, Shelby Long, Ashtyn McAleer, Kenzee Schmidt and Sophia Shelton. Kempker said the five-player varsity lineup could change from meet to meet, depending upon performance.

The Lady Falcons play in a triangular Wednesday at Centralia, then they play in their first tournament the following week in the Lady Crusader Invitational at Meadow Lake Acres Country Club.

“It’ll be about getting the nerves out of the way, because I think a lot of them are very nervous about this first meet,” Lenzini said. “They’re not really sure what to expect, so I’m hoping this will level them out.”

Kempker said they girls have gotten along on the course this preseason.

“They seem to really enjoy being together and they enjoy playing golf,” she said.

The preseason has been spent going through the fundamentals of the game.

“They’ve improved a lot, as far as their swing,” Lenzini said.

But the preseason has also been spent working on the mental aspect of the game.

“When they say golf is 80 percent mental, it’s really true,” Kempker said. “You really do have to work on not insulting yourself, because you’re just wearing yourself down. You have to work with emotions.

“Fundamentals always are first, but there’s the emotional aspect.”

The 2022 season will be a process for the Lady Falcons, who also play in tournaments at Boonville, Marshall, Versailles and California, as well as the Tri-County Conference Tournament at Eagle Knoll Golf Course.

Blair Oaks was assigned to Class 2 District 2 on Friday. The course for the district tournament has not been announced.