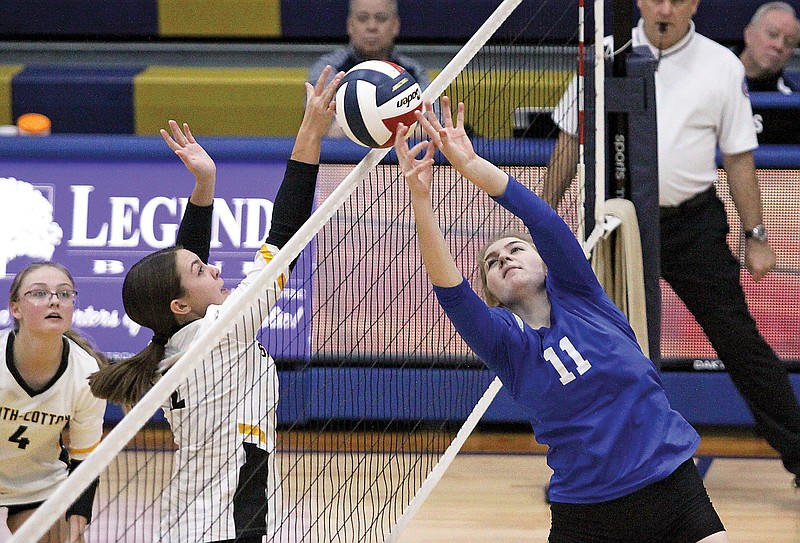 The Capital City Lady Cavaliers are hoping last week’s volleyball Jamboree at Warrenton is a sign of things to come.

Capital City won all six matches at the Jamboree, a year after coming away winless in the preseason event. The Lady Cavaliers want that momentum to carry over into the program’s first-ever season-opening win as they host the School of the Osage Lady Indians tonight.

“We are very excited for the beginning of this season,” Capital City coach Kelsey Vogler said.

Capital City swept Jamboree matches against Troy-Buchanan, Warrenton and the St. Louis Panthers. The Lady Cavaliers are coming off a 13-15-4 season, which included three five-set defeats.

Capital City graduated its first senior class last school year, so for the first time, the Lady Cavaliers will have some shifting take place in its lineup.

Senior Reagan Carel has been a setter for the past two seasons, but this year, she will move to outside hitter.

“We have watched her grow into a dominating hitter,” Vogler said, as Carel was fourth on last year’s team with 94 kills. “We know we need her hitting, and her serve-receive is the second-best we have on the court. We know we need her in six rotations.”

With Carel’s move to the front row, the Lady Cavaliers will switch from a 6-2 offense to a 5-1. Senior Grace Marshall will be the primary setter, finishing with 281 assists last season.

“Grace has truly stepped up into being able to set all the way around and run a 5-1 and control the court,” Vogler said. “She’s learned to continue her aggressive play in the front row as a hitter like last year and continue that as being an aggressive setter.”

Versatility will be a theme for this year’s Lady Cavaliers roster.

“I value a versatile player,” Vogler said. “I express that to the girls all the time.”

Senior Ruby Sprenger returns at outside hitter and senior Ava Meinhardt is back at middle hitter.

Meinhardt leads all returners with 156 kills and 47 blocks last season.

“She played behind Kiara Strayhorn last year, and she watched, she strived and continued to compete against Kiara,” Vogler said. “At this point, she has surpassed where I believe Kiara was at, at this point last year.”

Sprenger is next on the list of returners with 125 kills.

“We continue to watch her make more mature movements at outside hitter and take on a more dominating role,” Vogler said.”

Ashlyn Marshall, a sophomore, will also start at middle hitter this season. She started last season at the JV level but played a few varsity sets.

“She has definitely stepped into that role, and she has that leadership from Ava always coaching her,” Vogler said. “They’re constantly competing and looking at each other.”

Sophomore Addison Jones will be the libero for Capital City. Like Marshall, Jones also moved up to the varsity level during last season.

“We watched her grow throughout her freshman season,” Vogler said. “By the time districts started last year, she was in a starting role on varsity.”

Michelyn Appiah, a senior, will be a right-side hitter for the Lady Cavaliers.

“We have now played her as an outside, a middle and this is her year on the right side,” Vogler said.

Senior Haley Libbert will be as a defensive specialist on the right back, playing opposite of Appiah. Sophomore Kalley Brase and junior Sarina Litteken will also be on Capital City’s varsity roster.

The Lady Cavaliers will play in tournaments at Hickman, Eldon and Versailles this season. Last year, Capital City had a 5-5-4 record in those three tournaments.

“We’ve won some matches, we’ve lost some matches and we’ve had a lot of ties,” Vogler said.

She wants her team to turn those ties into wins.

“We want to be over .500 (this season), and that’s very doable, especially in the tournaments,” Vogler said. “If we can convert those ties into wins, not only would that put us in a better stance at the tournament, but we’ll have an opportunity to win first place.”

Through its first three seasons, Capital City has gone from zero wins to five wins to 13 wins. The Lady Cavaliers are looking to take that next step in Year 4.

“I think that’s what has been one of the true blessings of starting a program,” Vogler said. “These girls have invested in this.”

Capital City will be in Class 4 District 5 this season with Bolivar, Camdenton, Helias, Jefferson City, Marshfield, Rolla and West Plains.