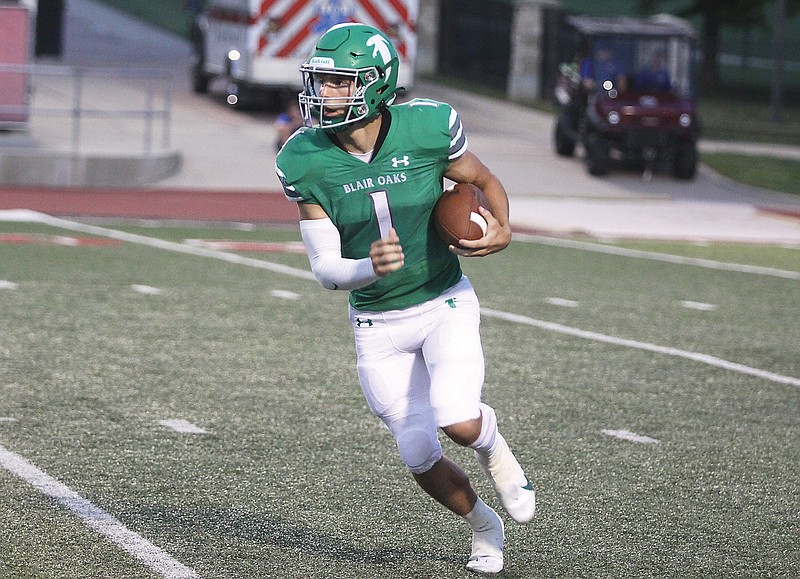 Blair Oaks quarterback Dylan Hair looks for an opening on a carry during the first half of Friday night’s game against Maryville in the Kickoff Classic at UCM’s Walton Stadium in Warrensburg. (Greg Jackson/News Tribune)

WARRENSBURG -- When it came time for Dylan Hair to make a big play Friday night, he delivered.

Only this time, he made the play with his arm, not his legs.

After rushing for 297 yards against the Maryville Spoofhounds, Hair completed an 87-yard touchdown pass to Nick Closser with 1:33 remaining in the game. That touchdown sealed a 54-42 victory for the Falcons, their fifth straight win in the Kickoff Classic, which was held this year at UCM’s Walton Stadium.

“He is at the point of his career where he’s done about everything. He wants to win, and on offense, you could see it.”

On the previous play, Hair ran 8 yards for a first down, but the ball was called back to the Blair Oaks 13-yard line due to a holding penalty. That set up a third-and-11 situation, and if the Falcons failed to get a first down, Blair Oaks would have to punt the ball back to Maryville, who would then have a chance to win the game.

Hair already had eight runs of 11 yards or more in the game, so the Spoofhounds were prepared for him the keep the ball on the next play.

“They really started crowding the box,” LePage said. “They were trying to take away the inside run.”

So Hair went to the air.

Closser darted to the right sideline and made his way past his defender, making the catch down the sideline. He broke a tackle by the Maryville safety at the Spoofhounds’ 40-yard line and cruised into the end zone for his second touchdown of the game.

Earlier in the fourth quarter, Hair threw a 51-yard touchdown pass over the top to Closser. With the game on the line, LePage said the two were clamoring for another opportunity to make a play.

“We had something called the play before, and Nick looked over and we had talked about the play-action pass,” LePage said. “We were backed up, but Nick goes, ‘Call it, coach! Call it!’”

LePage told them to make a play. They did.

“I was a little worried on that one, but that one felt good,” Hair said. “We ran it three different times, and that was the right one.

“The safeties were cheating down, so I knew I just had to give them a little play-fake and they’d bite.”

As he made his way to the end zone for a 36-yard score, Hair juked three defenders, including two in the Maryville secondary.

“It’s more of a reaction,” Hair said. “I know I can stop on a dime, so when I see them out of the corner of my eyes, I know I’m going to have to get ready to do it.”

Lackman had a 22-yard rushing touchdown in his high school debut and Adam Hall caught a 63-yard pass for a score.

Blair Oaks never trailed in the win, but at the same time, Maryville was always within reach of the lead.

“High school football is all about momentum, and we saw tonight the momentum shifted back and forth,” LePage said. “… It was a hard-fought game.”

Even when Blair Oaks was playing at its best offensively, scoring four touchdowns in the second quarter to build a 34-14 halftime lead, LePage knew the game was far from finished.

“We were really moving the ball,” LePage said. “When you’ve scored 34 points going into half, you have to feel good about it.

“But I did not feel comfortable, because I know how hard that team plays.”

Maryville had a pair of three-and-outs to start the game, but by the early going of the second quarter, the Spoofhounds had abandoned their run-first attack in the wing-T offense and turned quarterback Derek Quinlin into a passing threat.

In the first meeting between the two teams in the 2017 postseason, Maryville attempted just one pass in its state semifinal win. On Friday, Quinlin attempted 33 passes for the Spoofhounds.

“We didn’t prepare for their passing game,” LePage said. “Give them a lot of credit, everything they showed last week was wing-T, and we prepared for the wing-T. We shut it down, it wasn’t there and they went to throwing the football all over the yard.”

“We went in at halftime and made the (defensive) adjustments, but I don’t think we ever stepped up and looked comfortable,” LePage said. “I don’t think it’s that we weren’t in position, we just weren’t comfortable.”

But Quinlin also threw three interceptions, and Jake Hagner picked off a pass with 1:11 on the clock to cap the win for the Falcons.

Doug Blaha swooped in and undercut a receiver’s route for Quinlin’s first interception early in the second quarter and returned it 63 yards, setting up Lackman’s touchdown run. Alec Wieberg also intercepted a pass deep in Blair Oaks territory and returned it 46 yards to the Maryville 34-yard line midway through the fourth quarter.

“We created turnovers. Overall, when we had to, we stepped up and we played hard,” LePage said.

After winning their ninth consecutive season opener, Blair Oaks will play another opponent it has recently seen in the postseason.

The Falcons (1-0) will host the Lutheran North Crusaders at 7 p.m. Friday at the Falcon Athletic Complex in Wardsville. Blair Oaks has won both postseason meetings against Lutheran North: 48-21 in the 2018 state semifinals and 44-9 in the 2020 state quarterfinals.

“We were talking with a couple of teams, and Lutheran North came open and we made the phone call immediately,” LePage said. “We want to play good teams. We want to be a good football team at the end of the season.”

“We just have to follow him, he’s our motor,” said Hair, who has played in 35 of LePage’s wins at Blair Oaks.

LePage, who also coached for 12 seasons at Jefferson City, will be inducted into the Missouri Football Coaches Association Hall of Fame in December.