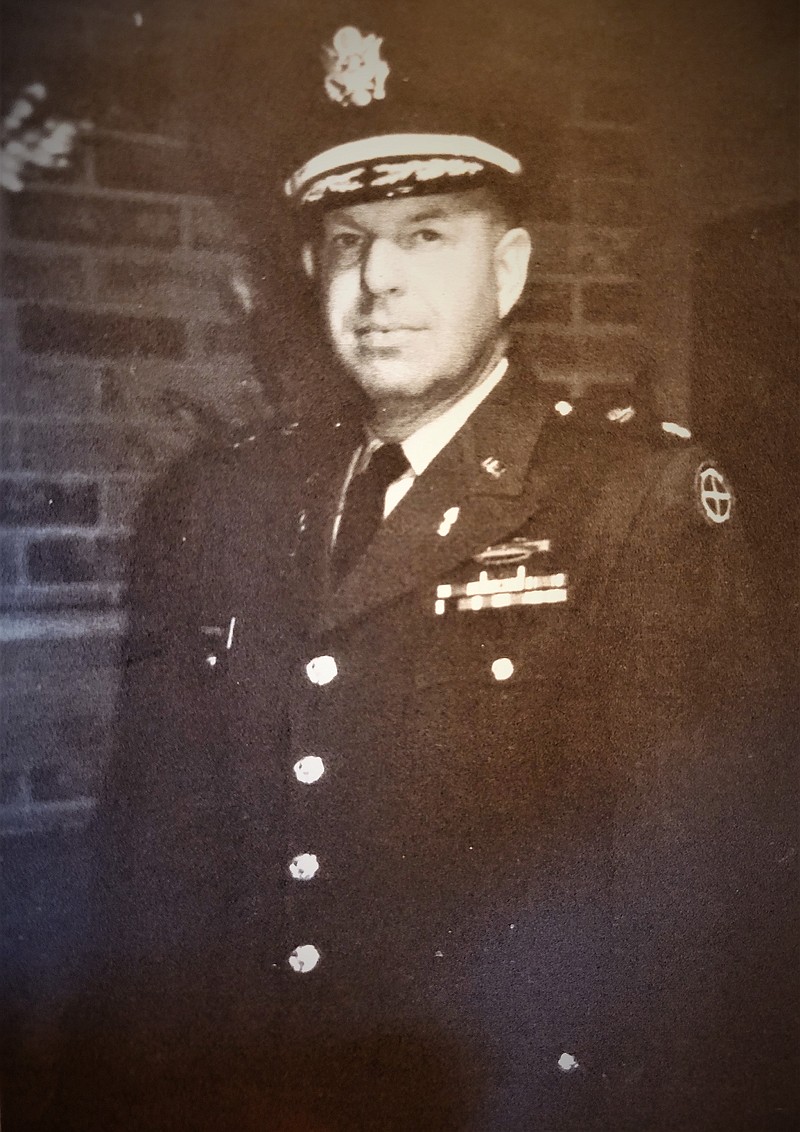 James Schaffner will be inducted into the Missouri National Guard Hall of Fame during a Sept. 9, 2022, ceremony in Kirksville. (Photo courtesy of James Schaffner)

There are many unique aspects to the military career of James Schaffner.

Beginning with combat service in World War II, followed by his recall to active duty during the Korean War, and ending with more than 30 years in the Army Reserve and National Guard, the former soldier has invested many years in service to his country. It is of little surprise his dedication has earned him the accolade of being selected for the 2022 class of the Missouri National Guard Hall of Fame.

While living in St. Louis, Schaffner was inducted into the U.S. Army in September 1944 and completed his basic training at Camp Robinson, Arkansas. When only 18 years old, he deployed as a replacement infantry soldier to the Pacific. Assigned to the 7th Infantry Division, he earned two Purple Hearts during fighting on Okinawa in April 1945.

"By the time I got out of the hospital, the war had ended, but I boarded a troop ship and became part of a group of soldiers sent to Korea for occupational duties," he said. "During World War II, I went through each enlisted rank and ended up an acting first sergeant."

He continued, "I didn't return to Missouri until 1947 and decided to join the Army Reserve and received my direct commission as a second lieutenant."

In the coming years, he married and briefly attended the School of Mines in Rolla before transferring to the St. Louis Business College. But soon, the Korean War erupted and the combat veteran was recalled to active duty to serve as a nuclear, chemical and biological warfare instructor at Fort Benning, Georgia.

He said, "I was supposed to be on active duty for 18 months, but I got extended for another six months. Fortunately, I was able to have my wife and our two young daughters stay there with me."

When receiving his release from active duty, he returned to St. Louis and worked for the International Shoe Company as a buyer in the purchasing department. He was later promoted to office manager of one of the company's factories, moving his family to Washington, Missouri.

Throughout it all, he remained committed to serving in a part-time military status and eventually transferred from the Army Reserve to the Missouri National Guard.

"I was a first lieutenant when I tried to join the National Guard here in Missouri and the adjutant general said he didn't have any slots for me," Schaffner said. "But then he said I could resign my commission and come in as a second lieutenant, which I did."

Grinning, he added, "I backtracked a little bit ... but it all worked out."

His full-time employment then brought him to Von Hoffman Press in St. Louis, overseeing sales accounts for a six-state region. From there, he was transferred to their plant in Jefferson City, where state government and TWA were his primary printing accounts.

The private printing industry not only provided him with a background in procurement procedures, but introduced him to many individuals in state government. Through these relationships, he became acquainted with many on the governor's staff and, in 1965, was appointed as director of procurement for the state of Missouri by Gov. Warren Hearnes, who was also a World War II veteran.

Three years later, he was appointed the director of revenue for the state. All the while, he maintained his part-time involvement with the Missouri National Guard.

"While in the Missouri National Guard, I served with maintenance and ordnance units, but then Larry Adams, the adjutant general, asked me to become part of the Selective Service Section," he said.

"At this time, the military draft was still in place, and we helped oversee the draft boards throughout the state," he added.

When Gov. Hearnes left office in early 1973, Schaffner, as a political appointee, was left to search for a new job. Later that year, he and his family moved to Oklahoma when he was offered the position as executive assistant to the state's governor.

"During my time at Oklahoma, I was a lieutenant colonel and was told that they had no openings at my rank," Schaffner said. "So, I mentioned it to the governor, and he said he'd take care of it."

Pausing, he added, "He requested a slot, and it was approved, and I stayed in the Oklahoma National Guard until I retired in 1986."

Following his retirement, he volunteered with several organizations and lived for several years in Washington, Missouri, before moving to Jefferson City to be closer to one of his daughters.

A career that spanned virtually every enlisted rank and ended as a lieutenant colonel provided Schaffner with many captivating moments to reflect upon. It includes time he served with the active U.S. Army during World War II followed by decades in the Army Reserve and the National Guard of two states, all of which represents a composite of experiences that have been most humbling.

"I just can't believe that I have been chosen for the Missouri National Guard Hall of Fame; all I can say is that I am very honored," Schaffner said.

"I guess that after World War II, I made the decision that I should stay in the Army and continue serving, and the Reserves and National Guard seemed like the best way to do it. Looking back on it all, I just liked being a soldier."

On Sept. 9, Lt. Col. James Schaffner will be inducted into the Missouri National Guard Hall of Fame during a ceremony at Kirksville. For more information, please visit www.monghf.org. 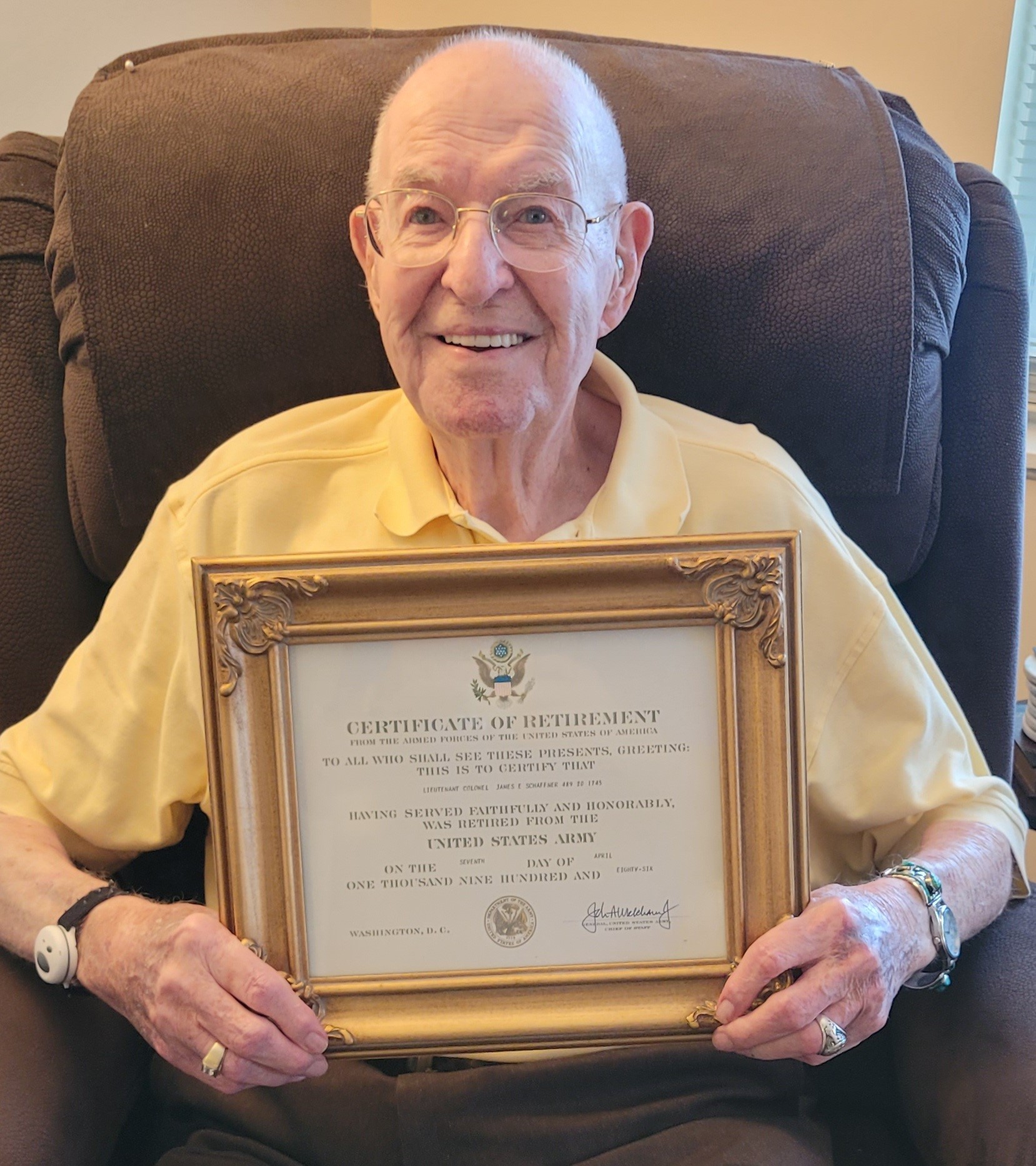 James Schaffner holds up the retirement certificate he received from the U.S. Army in 1986. A retired lieutenant colonel and veteran of Word War II, he enjoyed a military career spanning more than three decades and including service in the Army Reserve and Missouri National Guard.