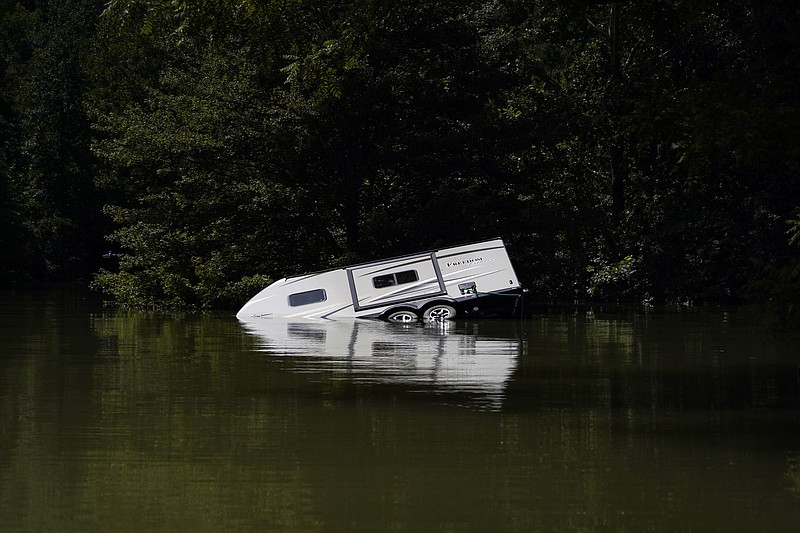 In the days since historic flooding swamped the Appalachian region, the availability of water surfaced as a big concern for victims after the floodwaters badly damaged water systems. As donations poured into the region, water was a main priority, along with cleaning supplies.

“We’re going to deliver water until these counties and areas beg us to stop delivering water,” Kentucky Gov. Andy Beshear said Thursday. “As hot as it is, with as many systems that are out, we want a mountain of water there.”

National Guard soldiers have delivered more than 11,600 cases of water, the governor said, as intense heat and humidity added to the misery as people continued shoveling out from the wreckage left by flooding that struck in the middle of the night a week ago.

In Knott County, Kirsten Gomez said she’s going through about five cases of water daily — for drinking and for cleaning mud-caked possessions that can be salvaged.

Her doublewide trailer was badly damaged by floodwaters from nearby Troublesome Creek. She was reconnected to the local water system Wednesday, but the water was so “murky looking” her family was only using it to wash themselves, she said.

Volunteers are driving through the area multiple times a day, dropping off cases of water and other essentials, she said.

“It looks like an assembly line, people bringing water,” Gomez said. “We try not to take as much because we know other people need it as well.”

Water service has been restored to many people in the region, the governor said. But about 13,500 service connections remained without water and another 41,000 service connections have boiled water advisories, Beshear said. Work is continuing on heavily damaged water systems, but other systems were “wiped out,” the governor said Wednesday. In some areas, it could take weeks or even months to repair water systems, he said.

Water crews from across the state are assisting in the repairs, Beshear said.

Kentucky’s bourbon distillers also stepped up by sending tankers and totes of water — usually reserved for spirits — into the flood-ravaged region, said Eric Gregory, president of the Kentucky Distillers’ Association. Gregory said his group was working with state emergency officials to prioritize areas and coordinate deliveries.

“When Kentucky hurts, we hurt,” Gregory said. “We’re all in this together and it’s our obligation as a signature industry to step up and do whatever we can for our fellow Kentuckians.”

Beshear said a special legislative session will likely be needed to craft a relief package for the region. The governor holds the power to reconvene lawmakers for a special session.

The Democratic governor said a state relief package should include aid to repair water systems to spare ratepayers from footing the repair costs through higher water rates.

“Because otherwise, they’re going to go to ratepayers,” he said. “So people who just lost everything that are rebuilding would have their water rates just skyrocket in what it would cost.”

Damage to area schools will total at least in the tens of millions of dollars, Beshear said. He said he’s spoken with lawmakers about including school aid as part of the relief package.

Scattered thunderstorms were moving through the area again Thursday, but most had been on the lighter side as of midafternoon, National Weather Service meteorologist Philomon Geertson said.

The statewide death toll from the historic flooding is 37, the governor said. Amid the massive cleanup, more families were preparing to bury loved ones killed in the flooding. Initial expenditures from a relief fund opened by Beshear were distributed to pay funeral expenses of flood victims.

About 3,000 customers still lacked electricity in eastern Kentucky, the governor said. Emergency shelters and area state parks housed more than 500 people who fled homes that were destroyed or badly damaged. Many more are staying with relatives and friends.