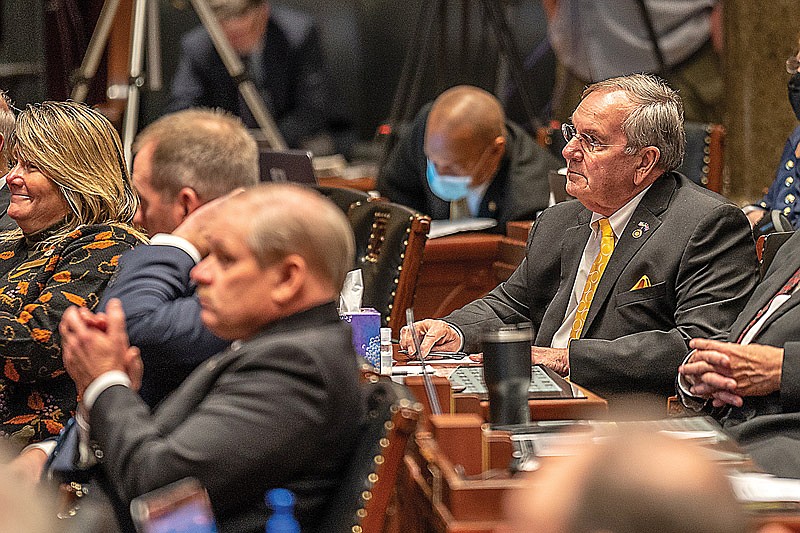 As a legislative session with ample attention paid to Missouri's state employees winds down, a bicameral effort to expand pay options for them is progressing through the committee process with new provisions attached.

Jefferson City Republicans Sen. Mike Bernskoetter and Rep. Dave Griffith sponsored legislation that would change state workers' pay schedules from the state treasury. While state employees are currently paid on the 15th and last working day of each month, the bills would allow them to be paid on the same day every two weeks, increasing the number of pay periods from 24 to 26 in a typical year.

Both versions now specify state employees may be paid "every two weeks" rather than "biweekly." Bernskoetter said there had been concerns the term biweekly ran the risk of being construed as meaning twice a week.

Both bills were also amended in committee to eliminate the Personnel Advisory Board, a group within the Office of Administration that approves classifications and pay plans for state employees along with making recommendations to the governor and the director of the Division of Personnel.

These duties would fall to director of the division and the commissioner of administration under the latest version of the bill.

"Basically, we have an underlying bill that lets them pay state workers every two weeks. It's a good bill where there's an extra perk we can offer to state workers so we can offer some of the things that private companies can," committee chairman Rep. Mike Henderson, R-Bonne Terre, said while adding the provision to Bernskoetter's bill. "What I tried to do was take some other House bills that have passed overwhelmingly, and give them an opportunity to pass on something else. This is a time of year where we have no idea what might really get through."

Rep. Gretchen Bangert, D-Florissant, was the only member to speak on the change in committee, stating her concerns about the elimination of the board.

"I think it gives too much control to one person," Bangert said. "One of the functions of the personnel advisory board is to approve classification and play plans for our employees. And I think that that's a better function for a group of folks rather than just one person being able to make those decisions by themselves."

The change brought the bill in line with an addition to Griffith's House Bill 2090, which also made it out of a Senate committee this week.

Though Bernskoetter could not be reached for comment, Griffith said the change was based on a request OA made to both lawmakers this session.

"That was a good addition and the perfect place for it," Griffith said. "It will clean up redundant language and streamline the process. That's a lot of what we're doing this session."

Other provisions added to the Senate bill were unique from the other version. Henderson's substitute included changes to the state's "Career Ladder" program that allows school districts to pay teachers extra if they participate in additional activities outside of their normal duties. To be eligible under the program, teachers had to have five years of experience under their belt and could advance to different levels for higher compensation if they continued in the program.

At the highest level, a teacher could make $5,000 more than their regular salary.

This session's language would allow teachers to be paid for different activities while the state bumped its end of the funding up from 40 percent to 60 percent.

Other sections added in the new version included alternative paths to certification for educators and a bill allowing substitute teachers to be qualified for more districts.

All of the additions have been making their way through session as their own bills as well.

Bernskoetter's and Griffith's bills were passed by their respective chambers earlier this month with broad bipartisan support. The proposal has been championed by lawmakers on both sides of the aisle over the past several years, but none of the bills have made it across the finish line.

If these versions of the bills were approved, they would return to their respective chambers for final consideration.

Both lawmakers said their bills were an effort to further aid the state workforce, which makes up much of their constituency.

The state is the largest employer in the area with around 14,000 state employees calling the Capital City, according to the Jefferson City Area Chamber of Commerce.

• SB 997: Modifies the manner in which salaries are paid out of the state treasury

CORRECTION: This article was edited at 2:27 p.m. April 28, 2022, to correct the dates of each month on which state workers currently are paid.