Midwest March for Life to draw folks from across Midwest 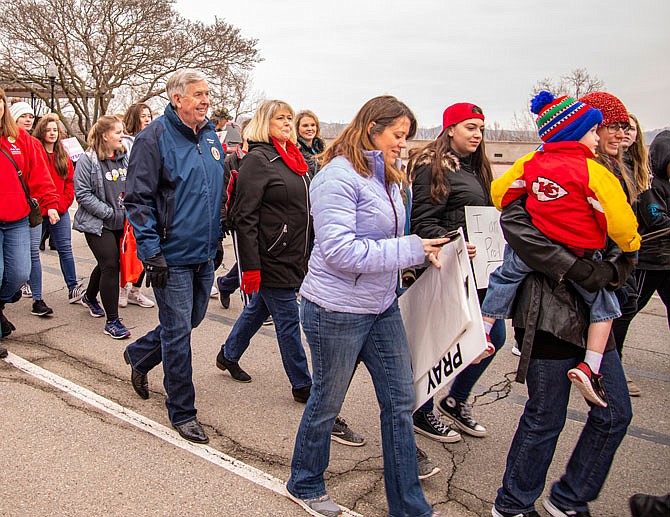 There is a lot of interest from across the country in today's Midwest March for Life.

And the pro-life crowd is expected to surpass last year's, which topped 2,000.

"We just expect more than we had last year," organizer Kathy Forck said. "I'm getting so many calls from schools. Old Monroe called and is bringing about 40 people."

Old Monroe, she explained, is near O'Fallon.

She added there are several cities around St. Louis where groups have expressed interest in getting to Jefferson City today.

"The Missouri Right to Life Bus is full and has a waiting list," she said. "It's just exploding."

Many of today's participants came in by bus.

To alleviate traffic concerns, Concord Baptist Church has offered to let the march use its parking lots, 3724 W. Truman Blvd., for bus parking.

The Trolley Company is shuttling people from area parking lots.

The march has access to several city parking lots, Forck said. Missouri Baptist Convention has made its lot at 400 E. High St., available for participants.

"It's amazing how God is working," Forck said. "People are able to drive their car and shuttle. St. Peter Church is allowing their church parking lot to be used for handicap parking. Park there and cross the street."

Several dozen speakers are scheduled. However, each is limited to five minutes.

Maybe, the high level of interest is because people are considering that world, Forck suggested.

Much of today's activity will focus on the U.S. Supreme Court's anticipated decision on the Mississippi abortion law.

But it will also focus on Missouri law and the state's Supreme Court, according to Forck.

Author Stacy Washington is to emcee the "Missouri Supreme Court Sidewalk Silent No More Awareness Testimonies" outside the Supreme Court at 2 p.m. today. That portion of the event is to also feature Most Rev. Joseph Coffey, bishop of the Archdiocese for the Military Services, and other speakers.

Author and speaker Abby Johnson is to have a book- signing at 8:15 a.m. today outside the Selinger Center, 216 Broadway.

Print Headline: Midwest March for Life to draw folks from across Midwest