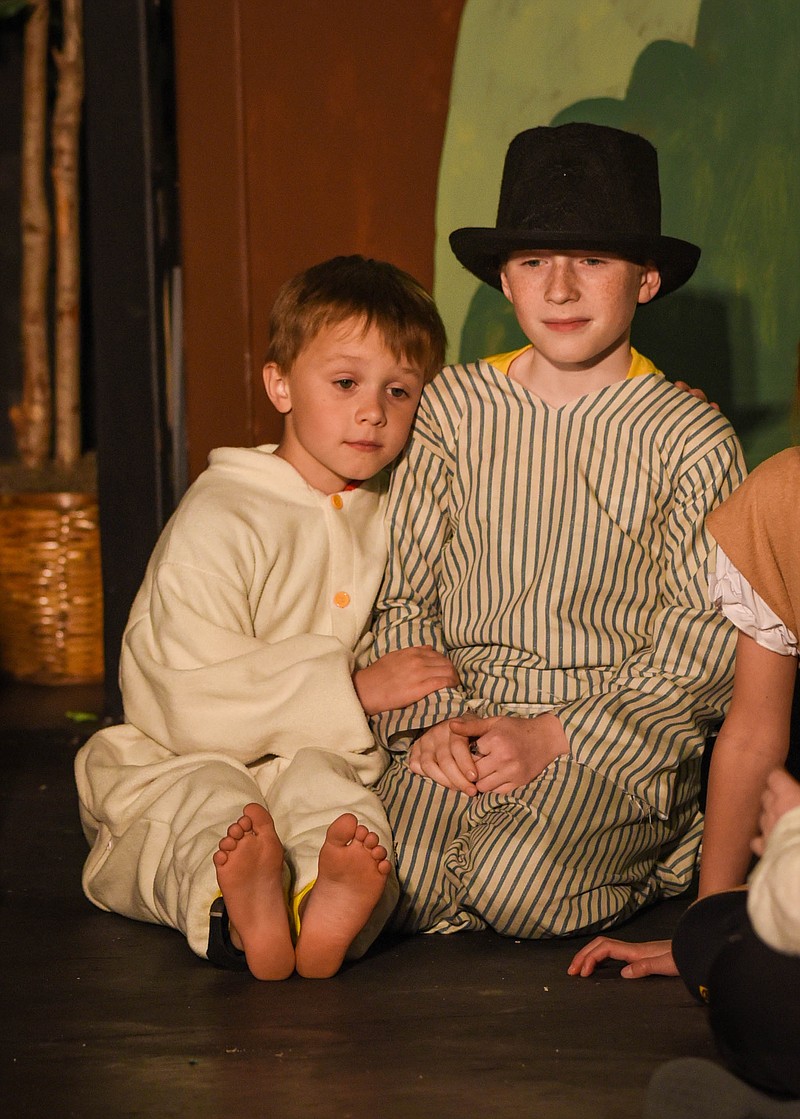 Keep your windows open -- a little magic is flying into Jefferson City next week.

The play features the same lovable characters from the novel, "Peter Pan (Peter and Wendy)" by J.M. Barrie but with 11 new songs added by the School Musicals source material. One night, Wendy, John and Michael Darling are visited by a mischievous Peter Pan who is looking for his shadow. After he teaches them to fly (thanks to some fairy dust), the children visit Neverland, home to many whimsical characters and adventures that change their perception of growing up. The question changes from when they're going home to if they'll ever return.

"Peter Pantastic" is a production by a class of Itsy Bitsy actors ages 7-14, which lends a lot of variety to the performance. Director Kira Rutter said working with children of different ages and abilities is like "a massive puzzle" she's piecing together.

"We play theater like people play sports: We have to maximize positions to accomplish the best roles," Rutter said. "If I get new puzzle pieces, I have to shift the puzzle."

Despite the challenges, she said the characters have come into place, and the cast has been pulling its weight to prepare for the show. Some are even stepping into the spotlight for the first time.

Rutter said with every production, the cast is chosen based on ability versus experience, and often she will seek actors who can step up into lead roles. That was the case with choosing two main characters, Peter Pan (played by Hunter Telford) and Wendy (played by Anne Jansson).

Telford had only done one Itsy Bitsy show before this one, but Rutter knew he was ready.

"He proved himself in the last show, showing he could handle large amounts of memorization and participation in rehearsals," the director said. "It's pretty significant for him to be playing Peter Pan."

Similarly, Rutter knew Jansson was ready to play Wendy -- she had been participating for five years at the theater, and there was no one better the director could think to play the role.

"I told her, 'There are other cast members, but I think you're my Wendy,'" Rutter said. "She told me, 'OK, if you think so.' She's been doing really well; we're thrilled to have seen her grow."

There were others who fit "right into place" in their casting: Eden Johnson, who has played villains in past performances, fit right in as a female rendition of Captain Hook. The actors for Michael and John, played by Kurt Webb and Lysander Rutter, had a brotherly bond going into auditions, so their casting was easy. The actor for Tinker Bell had to convey a lot with her emotions -- the character only has 20 lines -- and Violet Kimlinger was able to capture that sass.

Despite the classic story, some elements will be new to the audience -- some have been changed for cultural relevance.

"Peter Pan" was revisited by Disney in 2020 for its content, which includes negative depictions of Native Americans. Rutter recognized this, too, and changed much about the "natives of Neverland" to better fit a fantastical dreamscape versus a reflection of a real people group. The characters were given more lines and personality, and the costumes were changed.

"We tried to think about what people native to Neverland would look like," Rutter said. "Every time I read a script, I ask if I feel comfortable having students portray this and if audiences seeing this would like it. We try to take a lot of care in that."

As audiences are swept up into Neverland with fun costumes, towering set designs (a 15-foot boat mast being one of them) and songs arranged by vocalist Kay Webb, they might also recognize a deeper message: It's magical to be a child, but there's magic in growing up, too.

Wendy is ready to be a mother to the Lost Boys and Girls, but as adventures take place and Michael and John forget what they left behind, she reminds them it's time to go home. The first number of the play, "Nobody Wants to Grow Up," contrasts with the last number, "Peter Pan is Missing," as everyone has decided to grow up -- except Peter Pan.

Rutter, a mother to some of the actors in the play, still gets tears in her eyes at this ending.

"It's interesting being a mom how sad that prospect actually is," she said. "Even though it's uplifting, it's definitely a dichotomy: We never want to grow up because childhood is so amazing, but those fun things with childhood don't negate the beautiful things of adulthood

"Peter Pan is always on the edge of our imagination," Rutter continued. "It's a really powerful story; that's why he's stayed in everybody's minds. When we revisit the classics, you can never go wrong."

Tickets are $5 for adults and $3 for children older than 3, and can be purchased at the door or at www.itsybitsy broadway.com. 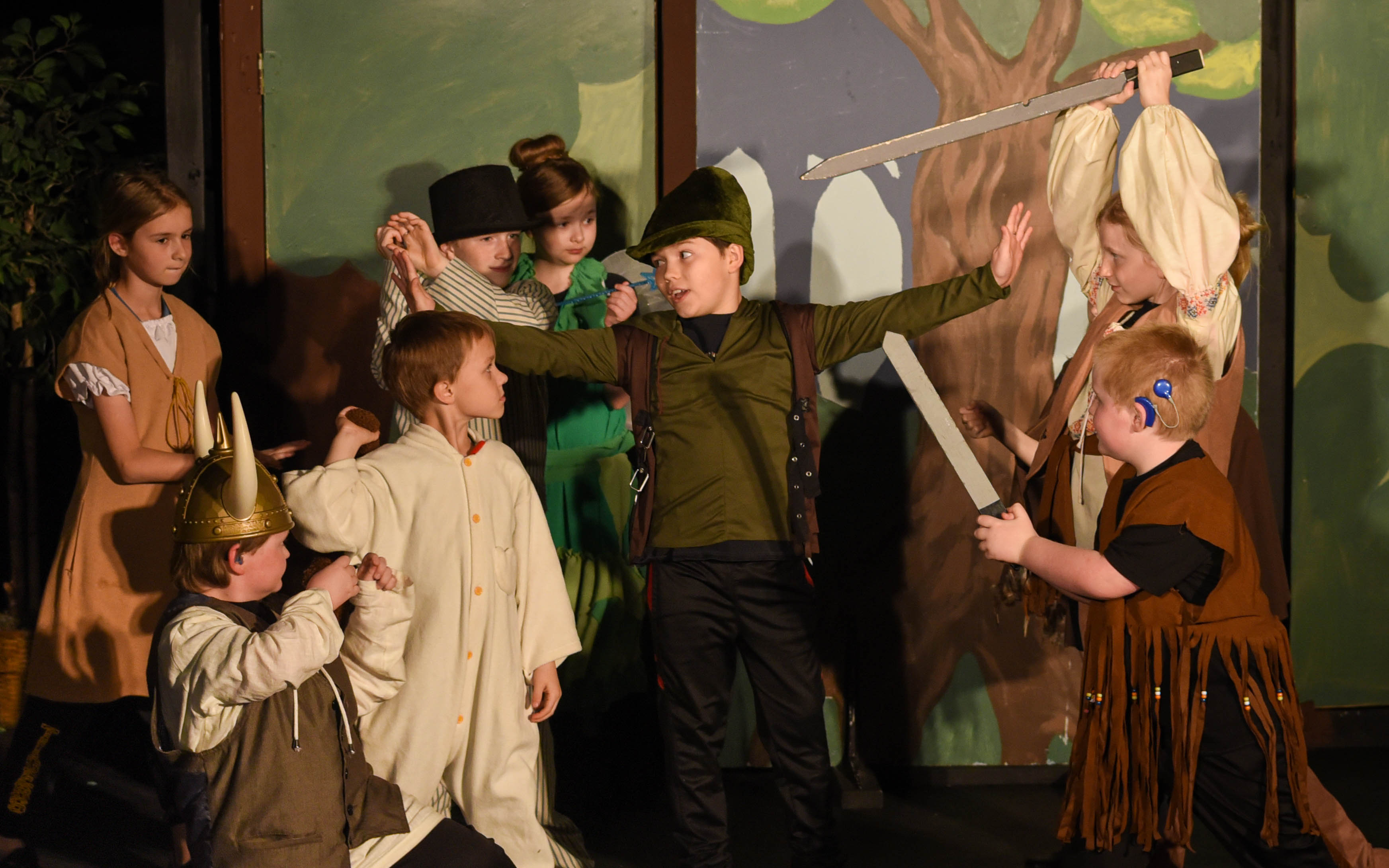 Hunter Telford, center, who plays Peter Pan, stops a fight from breaking out between the Lost Boys and Girls and the natives of Neverland during rehearsals April 7 for "Peter Pantastic" at Itsy Bitsy Theatre in Jefferson City. (India Garrish/News Tribune) 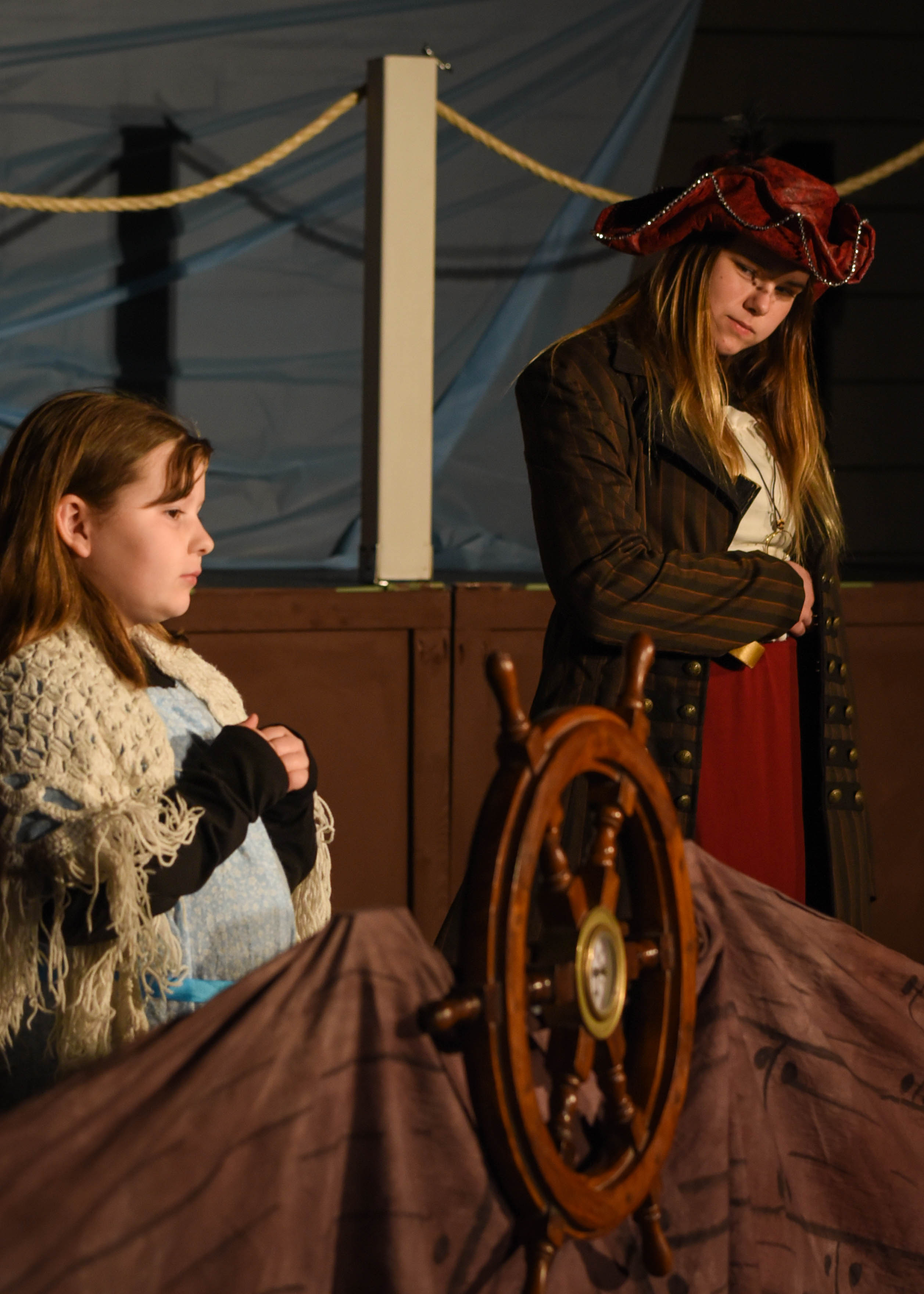 Eden Johnson, right, who plays Captain Hook, glared down at Wendy, played by Anne Jansson, during rehearsals April 7 for "Peter Pantastic" at Itsy Bitsy Theatre in Jefferson City. Director Kira Rutter said Johnson has been "a powerhouse" in this role, inspiring an intimidating villain in the play. (India Garrish/News Tribune)