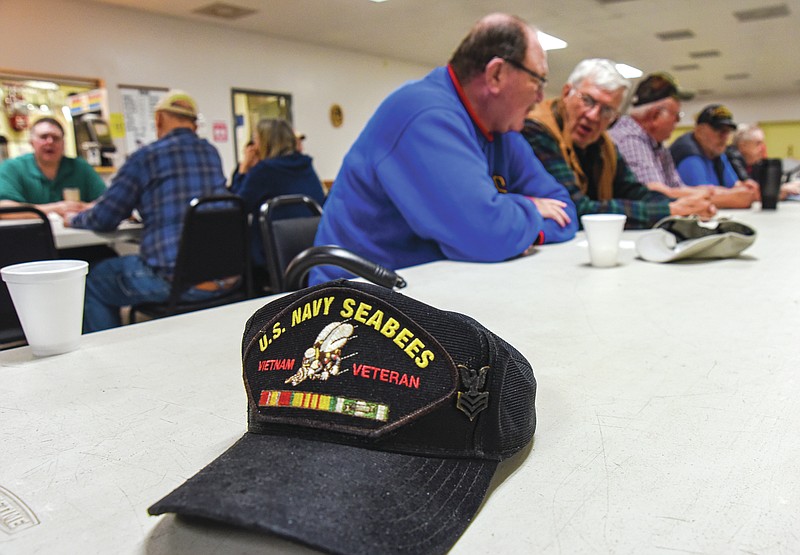 Virgil removed his U.S. Navy Seabees Vietnam Veteran cap he proudly wears Wednesday, April 6, 2022, during a gathering at the DAV on Monticello Road. Veterans can gather for a free breakfast and is an opportunity to talk about issues that may be troubling them, reach out for support or just go be around people with similar experiences. The group meets each Wednesday from 9 to 10 a.m. at the DAV on Monticello Road, just south of Jefferson City. (Julie Smith/News Tribune photo)

Drafted into aviation electronics for the Army during the Vietnam War, Bill Lipskoch witnessed helicopter crashes while serving overseas and lost several friends to combat.

He said he'd never forget the image of a pile of dead soldiers, some missing limbs, that had returned to the base via helicopter after a mission.

After returning home, Lipskoch, who now lives in Taos, became frightened by the sounds of jets creating sonic booms while flying overhead, the rifle used on his family farm and large fireworks.

"You get used to some of the stuff, but you've still got to bring the memories home," he said.

He was joined by about 24 others Wednesday at the Disabled American Veterans, 5054 Monticello Road, for the weekly veterans coffee talk offered by the Heroes Outreach Program.

The hour and a half conversations -- usually over a hot meal -- began as a veteran suicide-prevention group with founder John Morlock.

Morlock, an Army medic veteran, started the Heroes Outreach Program after struggling with Post Traumatic Stress Disorder and shooting himself in the head. He survived after being revived three times -- twice by paramedics and once on the operating table.

"You will never truly understand the pain of it or the psychological impact of it or even the cause of it, unless you actually have it done to you," Morlock shares. "In the case of suicide, I can honestly say I have been there. I have done that. I know the pain, desperation, despondency that brought you to that cliff."

Veterans commit suicide at a substantially higher rate than the general population in the United States, according to the most recent National Veteran Suicide Prevention report issued by the U.S. Department of Veterans Affairs in September 2021.

The report analyzes data from 2001-19, the latest year with the most complete cause of death information from the Centers for Disease Control and Prevention.

The 2019 figures are down from prior years.

McDannald said states with more rural populations, like Missouri, tend to have a higher suicide rate than the rest of the country -- for veterans and non-veterans.

Residents in rural areas are typically of a lower socioeconomic status and have fewer economic opportunities, McDannald said, as well as less access to infrastructure, community resources, and medical and mental health providers per capita.

"A large portion of our state's population -- to include veterans -- lives in rural areas," she said. "Altogether, that means Missouri veterans are more at risk, which is reflected in the data."

The VA report also doesn't account for the COVID-19 pandemic, which McDannald said will surely have socioeconomic effects that will impact mental health and suicide deaths. Population-size data is slow to collect and synthesize, she said, so it will be "quite some time" before the impact of the pandemic is known.

McDannald said the health administration within the VA is very concerned about veteran suicide and prevention has been a major clinical focus since 2007, when Congress passed the Joshua Omvig Veterans Suicide Prevention Act that created the Veterans Crisis Line (1-800-273-8255, press 1) and prevention programs at every major VA medical center.

There was another major push in 2018 when the VA implemented its National Strategy for Preventing Suicide, and in 2019 with the PREVENTS executive order.

"This is a bit like an upstream approach," McDannald explained. "If you see people floating downstream, you not only send out a rope to rescue them, but you also go upstream to find out why they're falling into the water in the first place."

The VA offers universal screening to identify veterans who have an elevated risk of suicide and then connect them with behavioral health providers. This often gives veterans the opportunity to talk about suicide without them bringing the conversation up, McDannald said.

"Many veterans simply will not bring up mental health symptoms or suicidal thoughts out of the blue to their provider, and we can't just wait for them to say it. We have to ask," she said. "By committing to ask every single veteran in our care at least once a year, we are better able to catch them before they are in crisis."

The agency also plans to reach veterans inside and outside its system by focusing on collaborations with other agencies and community organizations.

The Truman VA in Columbia has social workers at Phoenix Programs, Patriot Place and Welcome Home, McDannald said. They refer at-risk veterans to providers or the agency's Suicide Prevention Team. Partnering with the Columbia Vet Center, the Truman VA also conducts outreach to rural parts of the state.

The hospital also offers training for how to spot the signs someone is contemplating suicide and how to proceed.

The VA's Office of Rural Health is partnering with organizations to expand a veteran-to-veteran approach to suicide prevention and focus on building partnerships with rural veterans and their communities.

The objective, in part, focuses on identifying military service members, veterans and their families, screening for suicide risks and helping them promote an environment of connectedness.

In effect, it looks a lot like what the Heroes Outreach Program is doing across Mid-Missouri.

"Connecting veterans and first responders with their peers creates a support network that renews the camaraderie and brotherhood they felt while in the service," according to a brochure for the organization. "This connection can mean the difference between depression and isolation, or inclusion and belonging."

Dan Keenan, area program administrator with Heroes Outreach, said the organization works to create a positive environment where veterans can find community with each other. He said that's often more appealing to veterans than calling a hotline when in crisis.

Keenan, a Navy veteran who served 22 years, said the goal of the weekly meetings is to prevent veterans from reaching their low points.

"In every war, there are horrors of war, so they'll haunt you in your sleep," Keenan said. "You get to a low point to where you need to talk with other folks that have been there. That's why it's so important."

There's a lot of common ground when he's talking to fellow veterans of the Vietnam War over biscuits and gravy on Wednesday mornings, he said. They have a better understanding of his experiences than anyone else.

Lipskoch said he thinks it's important for veterans to stay active and engaged with others to keep negative thoughts from becoming overwhelming. Coffee talks provide that opportunity regularly.

"It's healing because you meet so many different people," he said.

Keenan said the VA often relies on outside organizations to fill gaps in senior health services and outreach, particularly for emotional support services. He said that makes nonprofits like Heroes Outreach essential.

"Everyone has their demons they have to deal with when they close their eyes at night, if you've been through combat you'll understand that," he said. "By helping somebody else through that, you're helping yourself."

The Missouri Department of Mental Health also offers a variety of resources for veterans and the Missouri Veterans Commission has links to resources through the Missouri Benefits and Resource Portal.

Jon Sabala, veterans services director at DMH, also stressed the importance of checking in on veterans and how to recognize when someone is in the early stages of considering suicide.

Sabala said DMH Veterans Services offers information and training online and in person, and the Missouri Suicide Prevention Network also offers training for clinicians and people who work with veterans.

"They are military connected suicide-prevention trainers certified in a course called Question, Persuade, Refer," Sabala said. "It's one of the more heavily researched and proven to be effective suicide-prevention courses offered."

The department also does outreach events with veteran service organizations, such as American Legion and Veterans of Foreign Wars groups, to promote federal, state and community resources, he said.

Sabala said he also the Buddy Check 22 Day as a platform to promote suicide-prevention education and awareness. The day is a regular reminder to check in with a veteran on at least the 22nd day of each month. 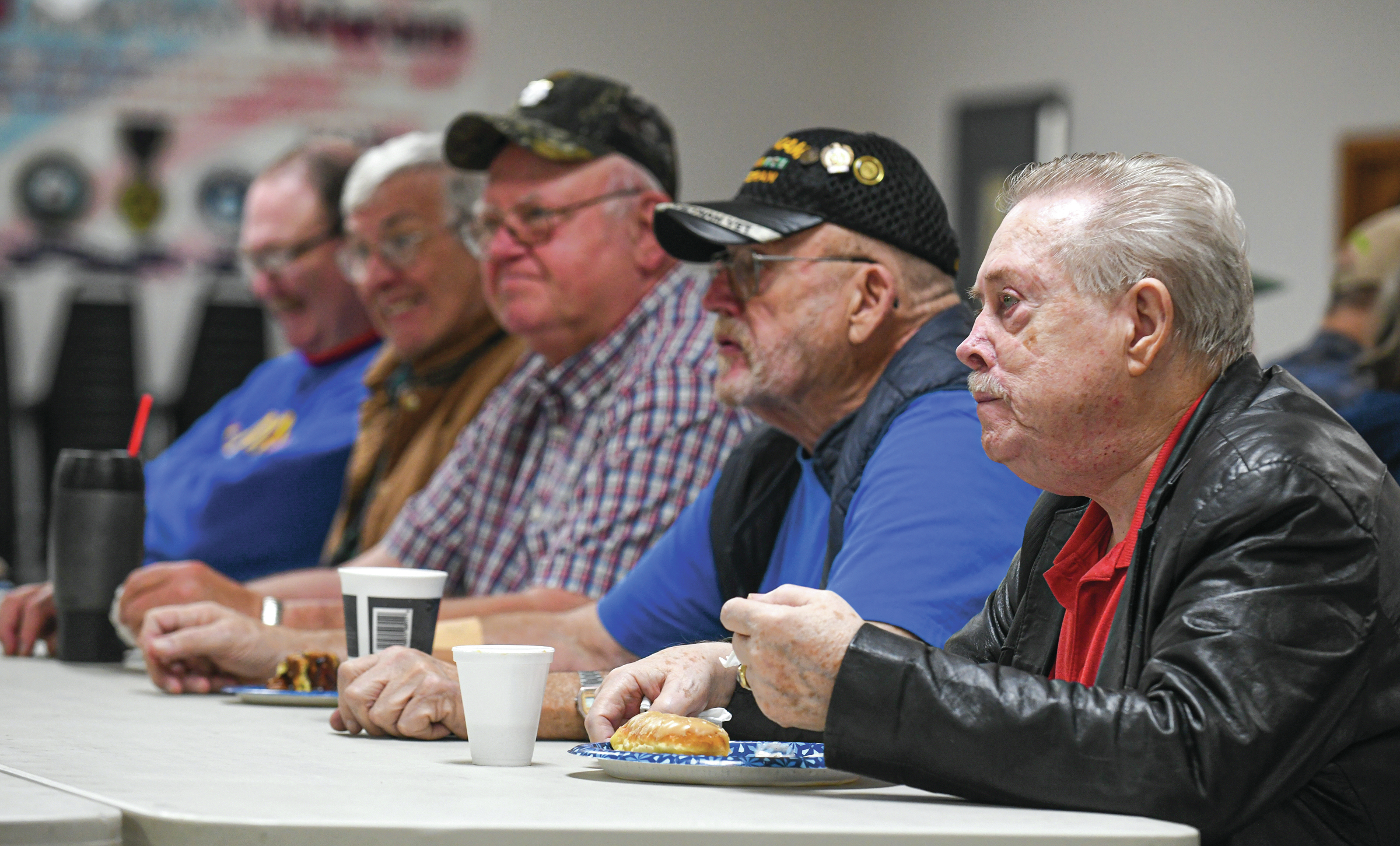 Juile Smith/News Triibune photo: Ken "Doc" Morris, at right, earned his nickname while serving as a U.S. Navy Corpsman during his service in the Vietnam War. Morris was one of about two dozen veterans in attendance Wednesday, April 6, 2022, at the Veterans Coffee Talk at DAV on Monticello Road.