Veterans group gathers to remember release of prisoners of war 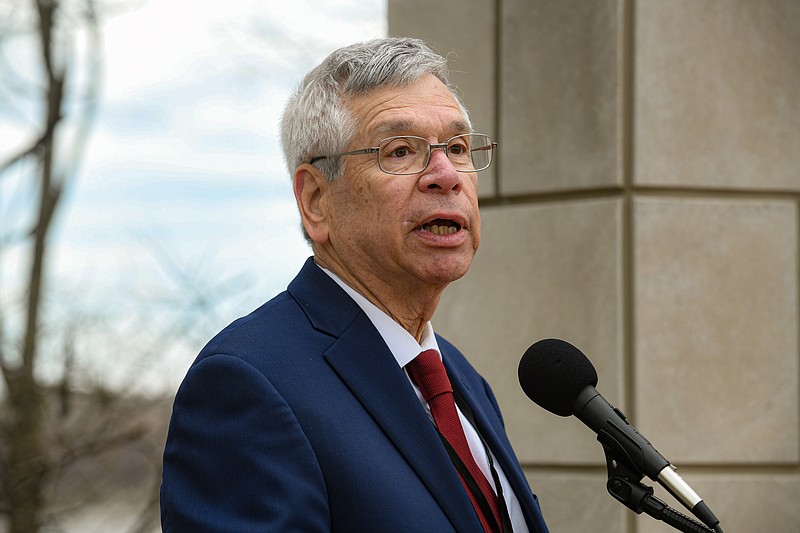 Julie Smith/News Tribune Vietnam Veteran Wayne Wallingford speaks during Thursday's POW-MIA wreath-laying ceremony at Veterans Plaza on the Capitol's north side. Wallingford was a U.S. Air Force pilot who flew numerous missions out of Thailand in support of ground troops in Vietnam.

Col. John Clark was a combat veteran when he was shot down over North Vietnam.

The enemy held him as a prisoner-of-war in the infamous Hanoi Hilton for nearly six years.

And nearing Christmas in 1972, when the United States started shelling the Hanoi area, he and other prisoners recognized the bombing patterns, and rejoiced that their colleagues had come to bring them home.

Somewhere overhead, sitting in one of the B-52s flying across the sky, Wayne Wallingford, now director of the Missouri Department of Revenue, participated in Operation Linebacker II, a bombing campaign that dropped about 20,000 tons of bombs on areas around Hanoi and Haiphong over the course of 12 days.

Their stories overlapped during a ceremony recognizing the approaching 50th anniversary of the release of Vietnamese prisoners of war.

The men joined other community and state leaders during a wreath-laying ceremony late Thursday morning at the Veterans Plaza north of the Capitol.

During one of the largest aerial bombardments in military history, more than 200 B-52s and 2,000 tactical support aircraft decimated North Vietnamese military and infrastructure, said emcee Brian Brooks, former Stars and Stripes editor. They conducted continuous sorties over 12 days and nights.

"It resulted in the eventual freeing of the last of 591 American POWs imprisoned in North Vietnamese prisons," he said.

He said some had been prisoners for more than eight years.

About 1,200 Americans will never return, Brooks said. Their remains are still lost in the jungles of Vietnam.

"We only have memories of them," he said.

Clark spent more than 2,100 days as a prisoner but said he always maintained faith his countrymen would come for him.

"It was the winter of 1972, and another Christmas was approaching," Clark said. "I'd been a prisoner of war in a North Vietnam prison camp for almost six years."

At the time, he was among about 30 prisoners in a large cell in the Hanoi Hilton, located in the French quarter of the city. Most of the other POWs had been moved out. The prisoners believed they were the only prisoners left.

Prisoners noticed the ground was shaking and thought the rumble might have been an earthquake that originated in mountains surrounding the city, Clark said.

Then they realized "aftershocks" were more likely caused by some bombing occurring.

It was unlikely that the rumble resulted from those quick "attack" sorties, because attacks are quick, Clark said.

Then they heard thunder, but the skies were clear.

"Holy cow! Our country has sent the B-52s for us," they realized.

The prisoners understood the large bombers were intended for carpet-bombing and creating mass destruction, he said. They knew what was coming.

Guards, on the other hand, didn't.

When the first missiles struck anti-aircraft radar positions, prisoners knew what was coming he repeated, but the Vietnamese still didn't.

"Over the ensuing days and nights, terror was raining from the skies," Clark said. "We had windows that we could see through. And we could see about 30 percent of the sky.

"When the bombs came to town, Hanoi would erupt like a volcano. The sky was full of explosions -- surface-to-air missiles, high-altitude anti-aircraft, shells exploding, tracers of all kinds going everywhere."

The North Vietnamese were just shooting up in the air and hoping someone would run into a bullet.

Some did, but they were few.

Light bombers flew in beneath radar.

"To our delight, they came in with 'random' regularity," Clark said. "Sometimes they would pass over the prison, just to let us know that we hadn't been forgotten."

That always got a big cheer, he said.

Following bombing runs, the Vietnamese would return to their stations, then another bombing run would occur, and they'd flee to their shelters.

Wreaths, which veterans are laying at memorials across the nation, remind us of comrades who remain missing, and who may have died in the line of duty, and that they should not be forgotten, he said.

It was 11 days of intense aerial bombing (because the planes did not fly Christmas Day), he said. That was a mistake, because it gave the North Vietnamese a chance to resupply their anti-aircraft missiles.

He said the B-52s flew 729 missions. During those, the Vietnamese shot down 15 planes.

The first mission was Dec. 18. Three of the bombers did not return.

"We're getting ready to fly the second night. I'll never forget the general's comments when he came in to brief us," Wallingford said. "He said, 'Well, we thought we were going to lose a lot more than we did.' Not exactly a motivating factor to go out and fly the next night."

They did fly that night and did not lose any planes.

The third night, the Vietnamese shot down six B-52s, three in the first 10 minutes of the operation.

At that rate, the United States would have lost a third of its B-52 fleet in the next 10 days, Wallingford said.

"On Dec. 26, we launched probably the largest aerial warfare campaign in the history of warfare. We launched 120 B-52s, and they were supported by 120 tactical aircraft," he said.

It took 2½ hours to get all the planes in the air. Once airborne, they created a 70-mile line.

"I flew all my sorties out of Thailand. When you fly out of there, you have just enough time to say the Lord's Prayer, sing the Air Force Hymn and say the third Psalm, and you are over the target," he said. "By the time we launched, the Guam sorties had been in the air for 5½ hours."

The plan was for all the bombers to drop their bombs within a 15-minute period.

"It was very successful. We decimated North Vietnam in that mission. When we went to fly the next mission, on the 27th, we did lose two B-52s," Wallingford said. "We flew 60 sorties that night, but we convinced the North Vietnamese that they would want to go back to the Paris peace talks, which they did."

The last mission left on its bombing runs Dec. 29. Bombers dropped their bombs at midnight. Operation Linebacker II was declared over at 6:59 a.m. Dec. 30.

"The mission, by that time the Vietnam War was very controversial in the United States, was really only two things -- end the war and get our people, our POWs back," Wallingford said.

The peace accords were signed, and POWs began coming home in February 1973.

"I can't even imagine that," Wallingford said. "We're very fortunate to have him here." 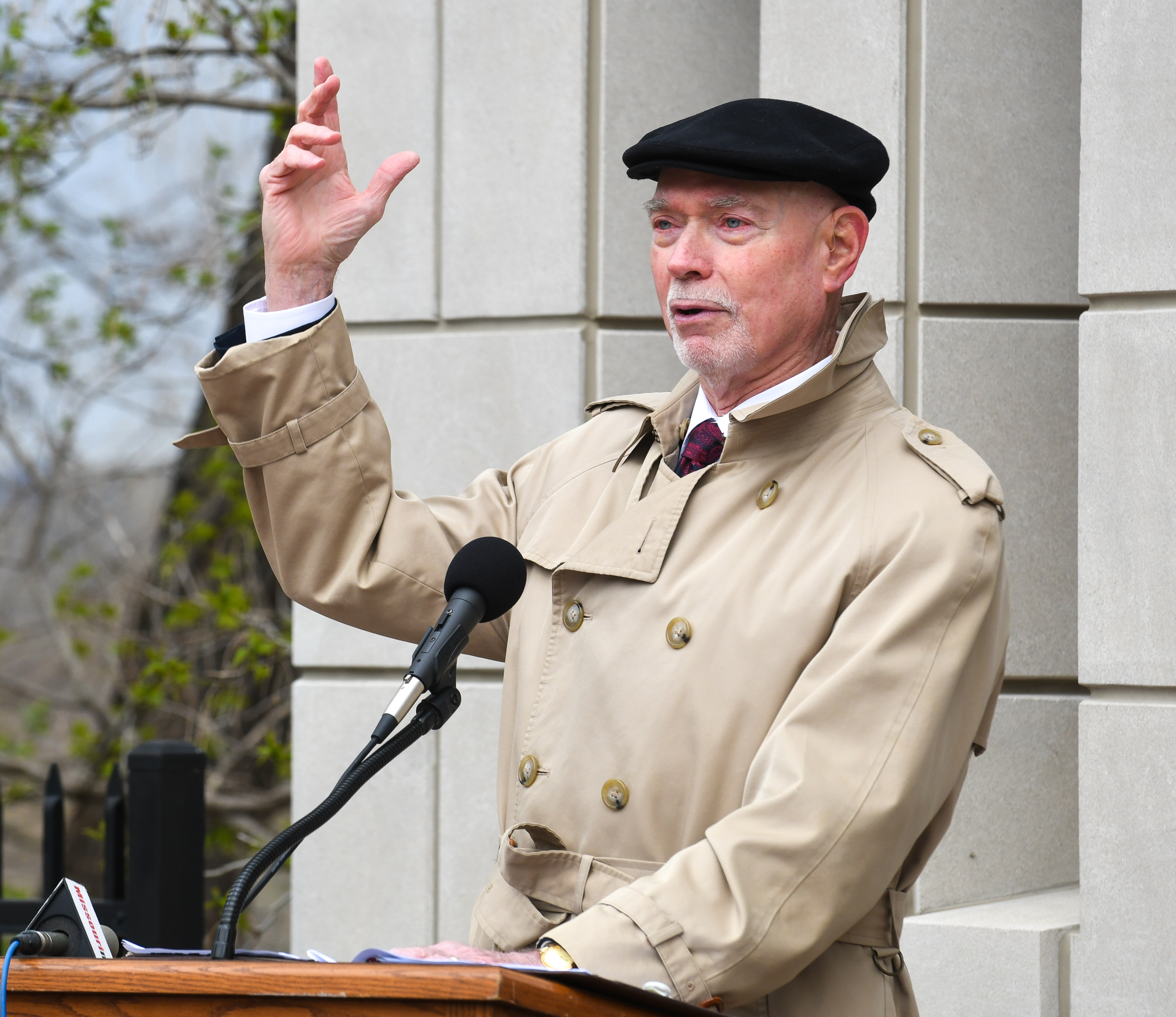 Julie Smith/News Tribune Keynote speaker Col. John W. Clark, U.S. Air Force (Ret.), is shown talking about being rescued in North Vietnam where he was a prisoner of war for over six years. A ceremony was held at Veterans Plaza Thursday to commemorate the 50th anniversary of the North Vietnamese release of American prisoners of war. 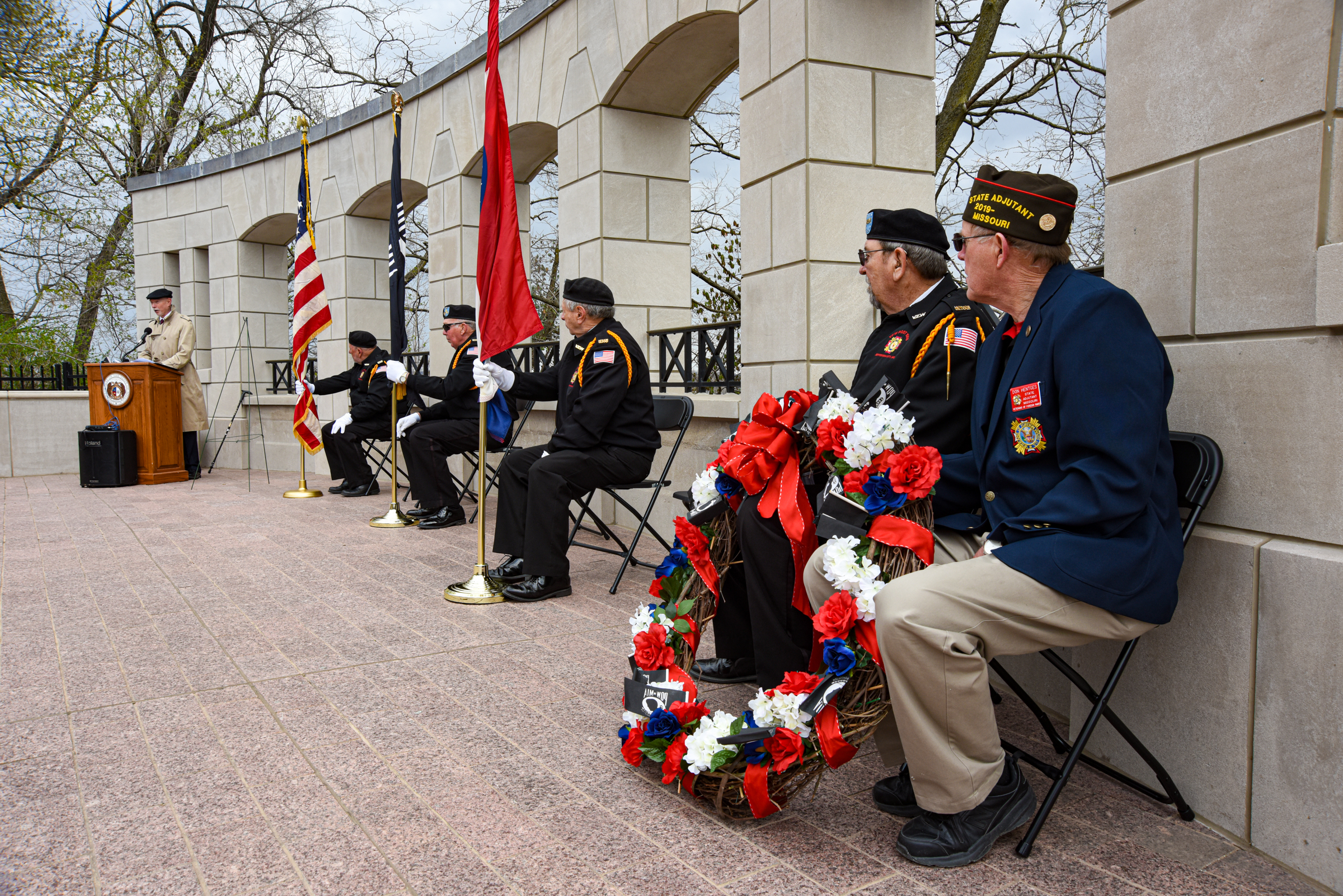 Julie Smith/News Tribune VFW Post 1003 Honor Guard members are seated during a keynote speech by Col. John W. Clark, U.S. Air Force (Ret.), far left, talking about being rescued in North Vietnam where he was a prisoner of war for over six years. A ceremony was held at Veterans Plaza Thursday to commemorate the 50th anniversary of the North Vietnamese release of American prisoners of war. Seated from right are: Don Hentges, Bob Jordan, Al Nichols, David Zumwalt and Ed Trube. 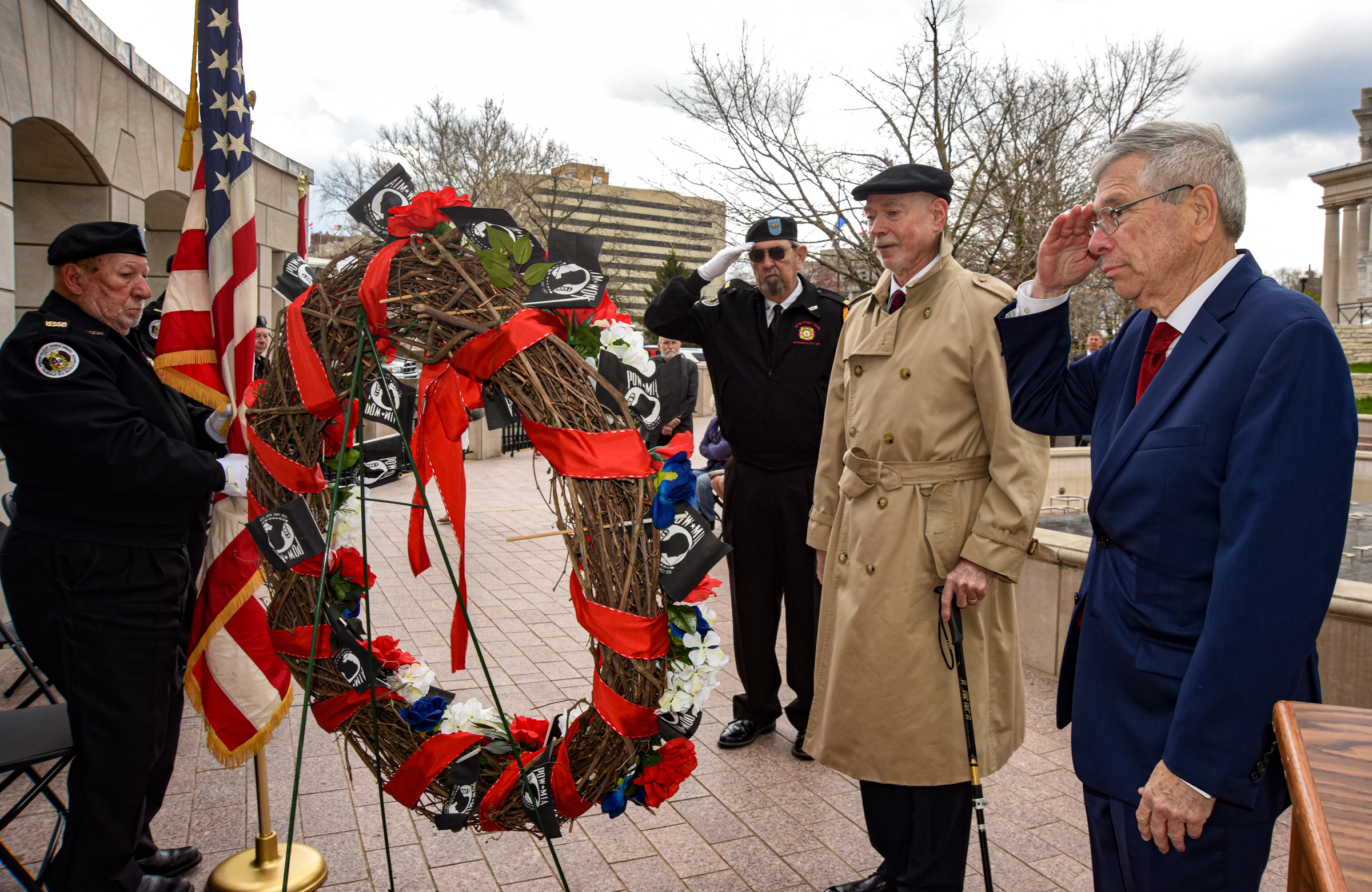 Julie Smith/News Tribune Wayne Wallingford, right, Lt. Col. U.S. Air Force (Ret.), salutes as Taps is played at the conclusion of Thursday's cerremony to commemorate the 50th anniversary of the North Vietnamese freeing prisoners of war. Second from right is Col. John Clark, U.S. Air Force (Ret.), who was a prisoner of war when Wallingford was flying bombing runs over North Vietnam where Clark was held prisoner for over 6 years. At left is Ed Trube, and background middle is Bob Jordan, both members of VFW Post 1003 who provided the day's honor guard.