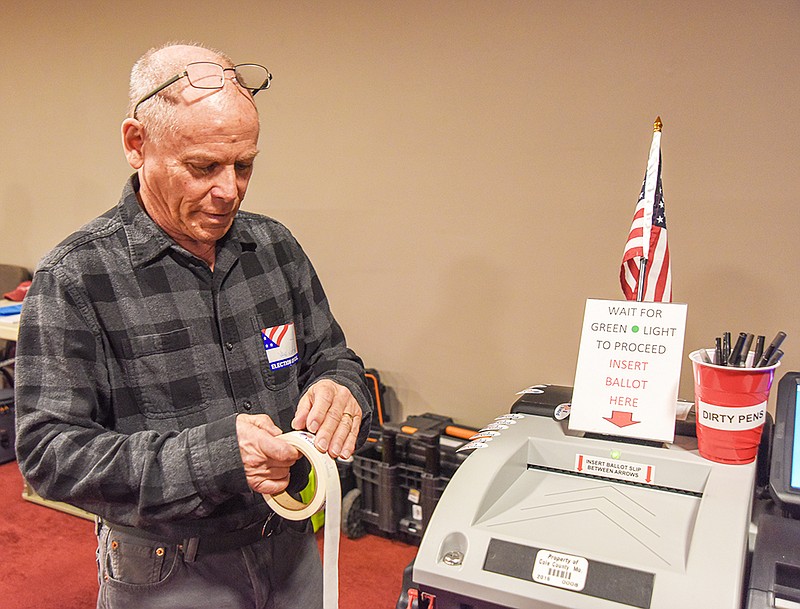 J.P. Van Nostrand peels "I Voted" stickers from the roll and places them around a voting machine Tuesday so voters can easily take one after casting their ballot. Van Nostrand was working at Jefferson/CC General in Southridge Baptist Church. (Julie Smith/News Tribune)

Much of the day was pleasant and sunny with a better than expected turnout at the polls.

However, just as the storms went through the area Tuesday, the election returns turned a bit turbulent when a glitch in a voting machine delayed the count and resulted in a recount for a precinct by the clerk's staff.

Prior to the election, County Clerk Steve Korsmeyer had forecast a 10 percent voter turnout for the spring election. However, a largely sunny day and several contested races helped to boost the voter turnout to 15.6 percent, with 8,295 votes cast.

Steady streams of voters presented few problems throughout the day on Election Day, but a problem with a Jefferson City Ward 4 voting machine delayed the posting of final results until almost 11 p.m. Tuesday.

According to clerk's officials, a machine counting votes at Our Savior's Lutheran Church on Southwest Boulevard (Ward 4, Precinct 1) appeared to show the correct number of ballots cast, but as election officials went through the results, the indications were the machine had somehow double- counted the votes.

Election officials were not sure what caused the malfunction, but they had to get a new machine and put the ballots through it again to make sure the count was accurate.

For much of the day Tuesday, the overwhelming sentiment of voters was that school board races drove them to the polls.

The school board, city council and a sewer bond issue were the only items on the ballot in Jefferson City.

At Faith Lutheran Church, 2027 Industrial Drive, 8 percent of voters (142 people) in Ward 2 Precinct 2 had voted by 12:05 p.m. -- a stronger turnout than past municipal elections and more than predicted, according to poll workers at the location.

Vivian Murphy said she votes in every election because it's an important way to make a difference in the community. She said she voted in favor of the bond issue to allow the city to expedite sewer-related projects because she has had issues with basement flooding and other problems due to sewer issues.

For City Council, the only candidate in Ward 2 was Mike Lester.

"As far as the school board, it was very clear to me who I was going to vote for: Erika Leonard and Anne Bloemke- Warren," Murphy said. "Just looking at the News Tribune interviews with them, I felt that I'm more in line with them."

David Martin said it was important to him to vote because he was concerned about the school board election.

"I voted for Ellinger and Gresham because they're the most conservative candidates; they don't want to go along with the CRT (critical race theory) in the schools," Martin said. "The other candidates don't seem to think it's a problem, but I feel it really is."

"That's been deteriorating for a long time," he said.

Several people who voted at Jefferson City's Ward 3, Precinct 1 location Tuesday were a little confused. Some suggested more signage would have helped them find the location, and understand where to enter the building.

Organizers moved the usual polling site from the Cathedral of St. Joseph Undercroft, on West Main Street, where they have voted for years. Unfortunately, the cathedral is undergoing major renovations and unavailable for elections at this time.

Instead, voters voted at Jefferson City Bible Chapel, 2804 Sue Drive, which is about a mile and half away.

The main thing was, they found their voting location and cast their ballots.

Despite there being only three items on the ballot, John Backues arrived Tuesday morning and did his duty because "it's always important to vote," he said.

"You should always try to vote. It's your constitutional right," Backues added. "If you don't vote, you can't complain. If you don't make your voice heard, you shouldn't growl about anything."

Although there weren't many items on the ballot, what was there was important, Courtney Waters said.

"There's a school board election on there. That affects policies for families all across the city," Waters said.

Alice Perry said the candidates for school board were good.

"I think it's wonderful for the school board," Perry said.

She added that she thinks it's a privilege to vote.

About 230 people had voted at the site by noon.

Those casting their ballots at Calvary Baptist Church (Ward 1/Precinct 1) around lunchtime largely focused on the school board race, with the consensus being that voters wanted to see the best people possible in the position.

"I'm in favor of the wastewater measure and for the school board, I like Marc Ellinger," Erma Walther said. "It kind of goes back a long time ago, but his father was trustworthy, and I figure his son is just as good a man."

Diane Lindsey said she's concerned about the school board election, so she's supporting a candidate because of his military experience and his career.

"I'm out here to vote for my conscience. If you don't vote, you can't complain," Christie Oliver said. "I don't have children in JC Schools, but that's a very pertinent thing to how society is shaped, so to be really blunt, I want to make sure critical race theory isn't taught at the local level and at the very least that everything will remain out in the open and transparent. I would say Ellinger embodies that."

Tim Thompson, human resource manager with the Jefferson City School District, said the school board election was a vital part of the election.

"I want to make sure we have the best board members possible, so that's what really brought me out," he said. "I'm new to Jeff City, but it's important for the district to be run by people that have the best interest of the students and faculty."

People who turned out to vote at Capital West Christian Church said they felt a sense they had performed their duty.

Sandra Little said it was important to vote so she could help decide "who's going to be doing what you need done."

Sue Cox said she felt it was important to vote because "that is the one method by which I can express my opinion."

"I never miss an election," she said.

Cox has always viewed voting as a serious responsibility and taught her children to feel the same way.

The school board and sewer improvements topped Joe Boland's list as important issues that brought him out to vote Tuesday.

Election workers at Capital West Christian Church Event Center in Ward 4 said the turnout had been steady, and if the pace kept up, it could be around 20 percent by the end of the day. At just after 1 p.m., voters had cast 328 ballots at the site.

Ray Clapmeyer, an election judge at American Legion Roscoe Enloe Post 5 in Ward 5, Precinct 2, said the site had a steady -- but not overwhelming -- line of voters.

"It's pretty routine today," he said.

At least 92 voters had cast a ballot by 10:30 a.m., Clapmeyer said. There are a total of 1,875 people registered to vote at the American Legion.

Clapmeyer said the precinct was slightly ahead of the county clerk's predicted 10 percent turnout by mid-morning.

He said he's expecting a bigger turnout in the fall when voters cast ballots in the August primary and November general election. He said the combination of county offices and larger races, like the U.S. Senate race, will likely draw bigger crowds.

To pass the time Tuesday, Clapmeyer said he and the other poll workers were simply catching up.

"This is about the third or fourth election the four of us have worked together," he said. "So we talk about what we've done between elections and families and current events, just whatever."

Kim Kliegel, a voter at the American Legion, votes in every election and said her voting experience Tuesday was quick and easy.

"I'm very interested in the school board," she said. "That's where my tax dollars go, so it's very important to make sure that we get the right people elected to represent the school."

Kliegel said she hoped more than the expected 10 percent of Jefferson City voters turn out to vote because it's always important to exercise the right.

Ellen Bloemke, sister of Jefferson City school board candidate Anne Bloemke-Warren, said her voting experience is always easy, and Tuesday was no different.

"I vote on everything, but we got here early today for Anne," Bloemke-Warren said.

Susan Petersen, Bloemke-Warren's mother, said their family is very civic- minded, and even more so when her daughter is on the ballot.

"I always say you can't gripe if you don't vote," she said.