Black and brown women are underrepresented in STEM fields. This program works with K-12 girls to fix that 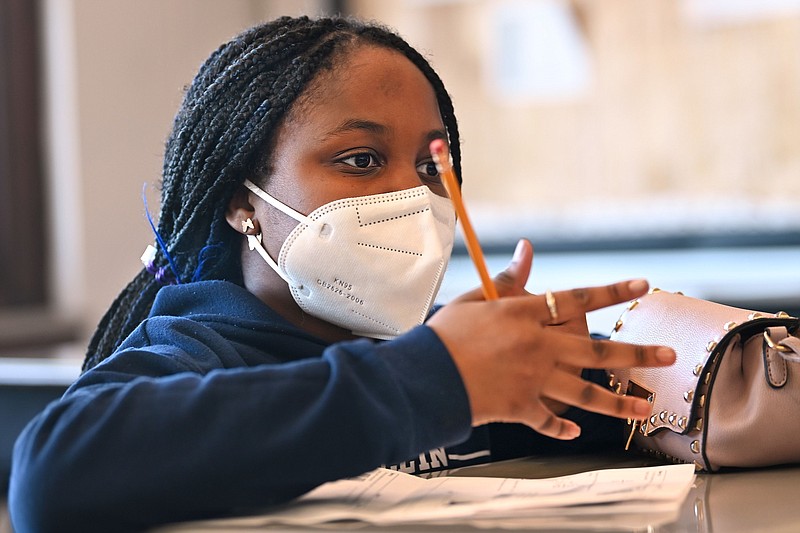 PHILADELPHIA -- A commotion of children exits Mastery Charter School Mann Campus in Philadelphia at the end of the day.

Chirping and reenergized by the final bell, they join up with their adults in the schoolyard in animated family reunions, then head toward the street.

Off to the side, however, a small clutch of around 10 children who have left the building turn around and are escorted back in, swimming against the tide of homebound classmates.

They're part of Black Girls Love Math, a small, regional program committed to eradicating racial and gender inequality in K-12 mathematics. The nonprofit focuses on growing the number of Black and brown girls aiming for STEM (science, technology, engineering and mathematics) careers. The initiative, which started in 2020, recently accepted its 300th student.

Children spend 90 minutes or so after the school clears out delving into the numerical arts, sharpening skills with an eye toward someday finding jobs in STEM fields, in which Black women make up just 5 percent of the workforce, according to some studies.

Aja-nae Newton, 10, a fourth-grader at the school, took a break from fractions in her Black Girls Love Math session to declare, "Math pays off for jobs you want.

"I fill up the entire paper in my notebook with numbers and, wow, it looks so neat. I'm proud of myself."

The program was the creation of founder and executive director Atiyah Harmon, whose life of education began as a student in Philadelphia public schools. She's taught math at Richard Allen Preparatory Charter School in Southwest Philadelphia, as well as the People for People Charter School in North Philadelphia. Harmon, who lives in Wynnefield Heights, also served as principal at a New York City charter school.

"There's a cultural norm around who is good at math and who's not," she said, "and Black girls aren't seen as being good in math. But if you don't see yourself represented in math fields, you'll shy away from it.

"There just hasn't been a push for Black girls to succeed in math."

Harmon's program is currently being run in six Philadelphia schools and two Camden schools. All are charters and are either elementary or middle schools. Between 150-200 girls are enrolled, she said.

"They don't have to be good in math," Harmon insisted. "They just have to want to get better at it."

That's the case for Mann fourth-grader Londyn Serrano, 10, who has a confession to make: "I actually don't like math," she said. "But I take it so I can be smart. Math makes me feel intelligent. And it could get me a career as a nurse or a veterinarian."

Black girls have absorbed discrimination in the classroom for decades, scholars say.

They undergo a form of "spirit murdering from teachers and authority figures who dismiss the abilities of Black girls to perform in STEM," according to an article published last month in the journal Cultural Studies of Science Education by Natalie King of Georgia State University.

As a remedy, King concluded, "humanizing spaces within schools and the larger community (must be created) for Black girls to access STEM with authenticity."

One of Harmon's goals in creating Black Girls Love Math was to place Black Philadelphia-area girls "in a situation where they are seen as brilliant and capable, and not positioned as less than," said Janine Remillard, a professor of education at the University of Pennsylvania. She said Harmon had consulted with her as the nonprofit was launched.

Remillard added, "Black girls need to be in an environment where they can thrive by being supported as learners, and by being able to look around and see others like themselves."

Along with developing proficiency with numbers, the goal of Black Girls Love Math "is to celebrate identity and community," Cappelletti said.

Then again, she acknowledged, "it's also a celebration of nerding out."

Each session of Black Girls Love Math includes a discussion of a She-ro, such as Mary Jackson, the mathematician and aerospace engineer portrayed in the movie, "Hidden Figures."

"We also begin with affirmations," said Nea Coble, a Black Girls Love Math teacher at Mann. "We say: 'I am brilliant, I try my best, I am my sister's keeper, and I'm a Black girl and I love math.'"

Coble said she believes it's vital to create an environment in which children aren't afraid to make mistakes to buttress confidence.

"I am a Black woman teaching Black girls, she said. "And it's my job to offer them guidance and mentoring."

Another benefit of Black Girls Love Math is young women are constantly being told what they're learning today makes a difference.

"Normally, it's hard for children to understand that what they're doing today will have an effect on their lives down the road," said Duval-Shepherd, herself the principal of Belmont Charter High School in West Philadelphia. "But the program helps them see."

As for Lauren, 8, a third-grader at McKinley Elementary School, "If you're scared of math, you can become brave and confident with Black Girls Love Math. I want to be a doctor some day."

That's the plan for Jade Davis, 9, a fourth-grader in the Black Girls Love Math program at the Mastery Charter School Mann Campus.

"A doctor can diagnose people and help them," she said. "You need math for that. And my teacher makes math fun.

Print Headline: Black and brown women are underrepresented in STEM fields. This program works with K-12 girls to fix that