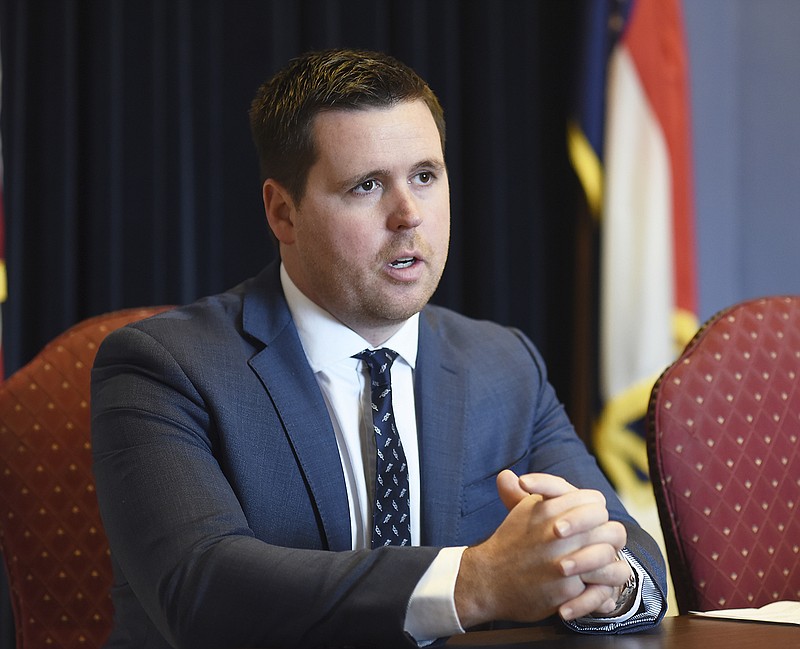 Missouri State Treasurer Scott Fitzpatrick is shown in his Capitol office in January 2020.

The proposal, which is part of the $3.5 trillion American Families Plan being negotiated in Congress, would create a comprehensive reporting system in which banks and other financial institutions would be required to disclose information on accounts that intake or expend more than $600 in a year to the Internal Revenue Service.

The requirement is estimated to apply to more than 100 million Americans with bank accounts and is intended to help end tax evasion.

Fitzpatrick said the requirement would burden financial institutions, put sensitive account information at risk and be an invasion of privacy for Americans.

"People have a reasonable expectation to privacy, and this is an unwarranted, essentially, search and seizure of information that in any other situation you would have to have a warrant to access," Fitzpatrick said. "We look at the proposal as being constitutionally problematic, and we also look at our responsibility in state law to protect the information of account holders. So, as a result of that, I've determined that frankly we're not going to comply with this requirement if it is passed into law and if they attempt to force us to comply then we'll fight in court."

Fitzpatrick said he also doesn't believe the IRS is prepared to use the data in a meaningful way or be able to protect it well.

"There have been leaks of taxpayer information out of the IRS even this year, so giving them access to every American's banking information seems like a terrible idea," he said.

Fitzpatrick said the measure would also make it more difficult to promote financial literacy and get Missourians without bank accounts to use one.

In addition to being an invasion of privacy and security risk, Fitzpatrick said the requirement conflicts with Missouri law as it applies to the state's MOST 529 and MO ABLE accounts overseen by the Treasurer's Office.

MOST and MO ABLE accounts are currently kept confidential by state law.

Fitzpatrick said the proposal, as it's currently drafted, would require his office to turn over all transaction data related to the MOST and MO ABLE accounts - including deposit and withdrawal information.

Last month, Fitzpatrick joined 23 other state treasurers, auditors and financial officers within the State Financial Officers Foundation in sending a letter to President Joe Biden stating their opposition to the proposal.

The letter contained much of the same reasoning for why Fitzpatrick, who is vice chairman of the State Financial Officers Foundation, opposes the measure.

"Simply put, this is a direct assault on all Americans of all economic demographics and includes all business and personal accounts," the letter states. "There is zero quantitative or qualitative evidence that this proposed measure will aid in collecting taxes from tax evaders."

Fitzpatrick said he expects the other states in opposition will also not comply with the federal requirement should it pass into law, and fight the legal challenge together.