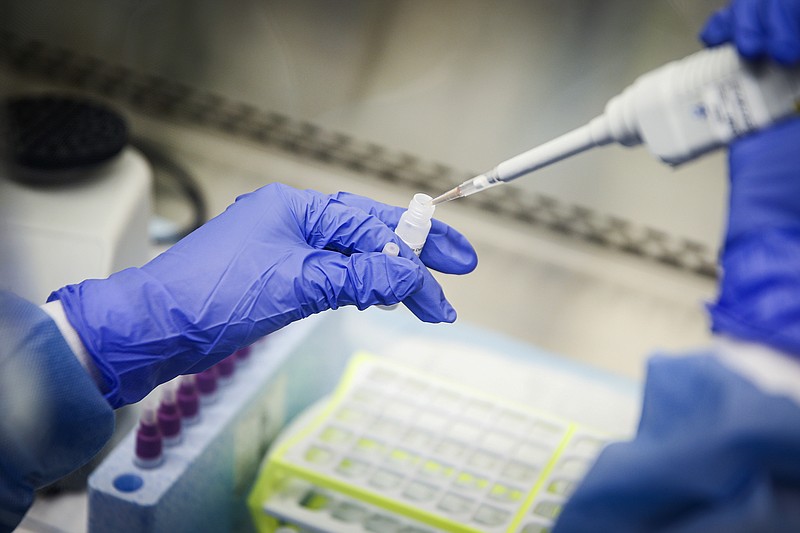 A laboratory technician prepares COVID-19 patient samples for semi-automatic testing at Northwell Health Labs, Wednesday, March 11, 2020, in Lake Success, N.Y. The U.S. Food and Drug Administration has approved faster testing protocols as the viral outbreak continues to spread worldwide. For most people, the new coronavirus causes only mild or moderate symptoms. For some it can cause more severe illness. (AP Photo/John Minchillo)

A collaborative effort among state agencies could bring a new laboratory campus to Jefferson City.

The Missouri Department of Health and Senior Services, Department of Natural Resources and Department of Agriculture are working together on a project proposal that would create multi-agency labs focused on human, animal and environmental testing.

Together, the state agencies would apply a common "One Health" approach when assessing laboratory needs, space issues, and current and potential concerns.

The same approach would apply to potential expansions and preliminary design concepts with the goal of bringing the three agencies together on a single campus around the current State Public Health Laboratory, located at 101 Chestnut St. across from the Missouri State Penitentiary building.

DHSS Communications Director Lisa Cox said the project proposal is in preliminary planning stages and has not yet been approved to move forward.

With the goal of creating a campus, Cox said the collaboration would lead to the construction of new facilities to conduct human, animal and environmental laboratory testing.

"This transformative investment in Missouri state agency laboratory infrastructure is a 'One Health' approach to disease and environmental testing in Missouri and would create a unique campus of laboratory science functioning together in state-of-the-art facilities linked together to deliver quality, comprehensive and rapid laboratory services for current and future health/environmental threats to Missourians," she said.

Cox said the campus would be built in the area surrounding the current laboratory adjacent to the former prison.

Jefferson City is also looking to make investments in the area surrounding the Missouri State Penitentiary.

The city's plan, which wouldn't touch the historic prison building, would incorporate a hotel, conference center and ice arena, as well as the potential for a parking garage, museum, train station, office space and residential townhomes.

Cox said the "One Health" approach is not an effort to consolidate laboratories because each agency has fundamental differences in specialized facility needs, organizational priorities, technical requirements and operations.

However, it would be beneficial for the labs to exist on a "One Health" campus, she said, because it would allow the agencies to more easily share information, technology and equipment, support services, expertise and space as needed.

On a single campus, DHSS, DNR and MDA could more easily collaborate on testing and handling health or environmental discoveries, Cox said.

Christi Miller, Department of Agriculture communications director, said some members of the Animal Health team occupy space in the existing State Public Health Laboratory, but said they hadn't had discussions about a new lab and deferred to DHSS.

The laboratory campus would likely be paid for by federal American Rescue Plan Act funds provided to the state as it was included in a list of capital improvement projects the governor was considering for ARPA funds in October.

Missouri received more than $2.6 billion in funding from ARPA, and Gov. Mike Parson is expected to announce a plan for how those funds will be spent in his proposed budget in January.

Additional considerations for the ARPA funds include state computer and IT system upgrades, funding to improve broadband access and water infrastructure improvements.

Chris Moreland, communications director for the Office of Administration, said the list of building improvements eligible for ARPA funds is constantly changing and there isn't an official decision as to whether the laboratory campus would be included as of Tuesday.