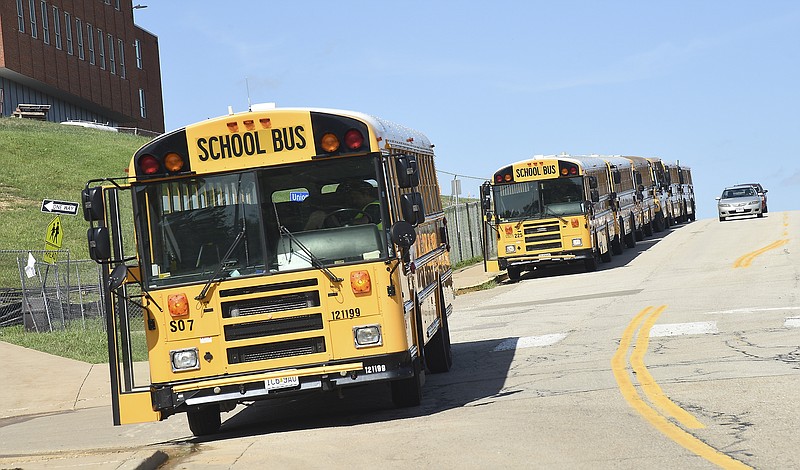 Bus drivers gather below Jefferson City High School and wait for students to exit the building on Aug. 27, 2019, the first day of the 2019-20 school year.

The Jefferson City School District hosted the second of two events for the community to learn about potential school boundary line changes Tuesday.

The open house meeting was at Jefferson City High School. Interim Chief of Operations for the district Dawn Berhorst; Superintendent Larry Linthacum; and Karen Daniel- Hamberg, of Cooperative Strategies, took questions from community members as maps of the four scenarios created by the Boundary Committee sat on tables for viewing.

The committee is in the community feedback phase of its process. On Dec. 7, the committee will review the feedback and develop its recommendations for the school board, with an option to continue working on Dec. 14 if needed to develop the recommendations.

The district provided a survey for community members to give feedback on the scenarios. Before the survey, there is a video presentation that explains each scenario.

Scenario 2 would move 243 elementary students, 63 middle school students and 100 high school students. This scenario has just one feeder split at West Elementary School. The plan moves some students in the middle west part of the district but moves the fewest students overall.

Scenario 3 provides the biggest change for secondary students; it would move 383 elementary students, 413 middle school students and 553 high school students. This scenario doesn't contain any feeder splits, and Daniel- Hamberg noted the entirety of Callaway Hills would attend TJMS, and the change would not strain transportation as the area must cross a bridge to attend middle or high school. Scenario 3 makes changes to the secondary school areas, with the Callaway Hills swath of land on the east side of the district switching to TJMS and Capital City High School.

Scenario 4 would move 487 elementary students, 93 middle school students and 124 high school students. It moves several areas of students in the center and west of the district at the elementary and secondary levels. There are no feeder splits in this scenario.

All four of these scenarios resulted in one of the two middle schools being over capacity. The capacities listed in the scenarios do not include trailers.

Daniel-Hamberg said the middle schools are currently very highly utilized, meaning they are near to capacity. She suspects this issue will be the case until there is more middle school space. However, she said over-filled schools can normalize as classes move up.

Linthacum said if boundary lines change, staff movement would be possible, but the district would have to assess the need for that when the time comes.

Some parents were concerned they would have longer travel times to and from school or that bus routes would get longer. Others worried about the possible detriments to their children from changing schools and losing friends and community.

With scenarios that made children switch to schools that were further away, Kristy Engelbrecht worried about children being excluded from extracurriculars because of the distance to and from practice and games. For some, the cost of gas could be prohibitive.

"It's a financial issue for parents - the gas, the time," Engelbrecht said.

April Holzen said she came out to get answers to questions so she could see the "big picture."

In all four of the proposed scenarios, her child would have to change schools.Though she doesn't like the idea of that happening, she wants to try to look past just her child's situation.

"If I want to give accurate feedback on this survey, which, that's my ultimate goal, I want to make sure I learn as much as possible," rather than being angry, she said.

The Boundary Committee is made up of parents, school staff and at-large members, and all elementary schools are represented. The committee has been meeting since Oct. 19. According to School Board policy, attendance areas must be reviewed at least every three years. The committee has been working with Cooperative Strategies, a national K-12 planning firm.

Those interested in learning more about the boundary line process or in taking the feedback survey can visit coopstratprojects.com/jcschools/. There is also a school locator tool that allows people to type in their address and see the impact of each scenario.