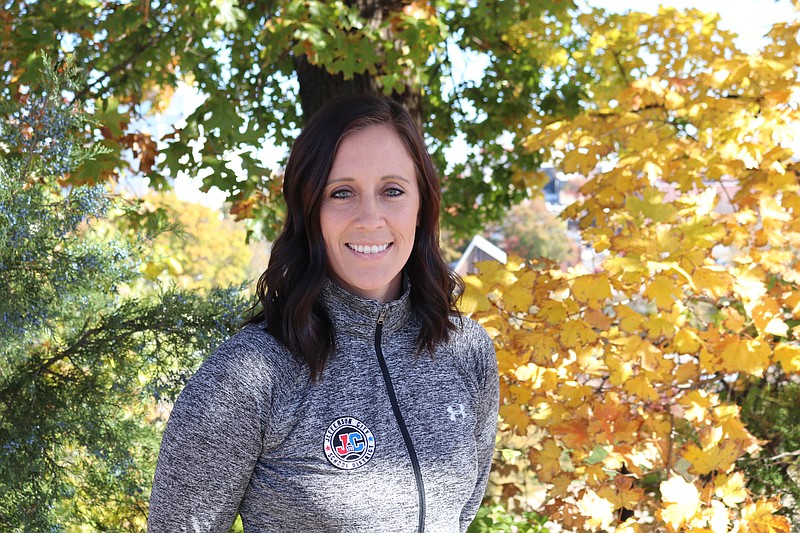 Her childhood in Honey Creek was packed with softball, volleyball and basketball games, often attended or coached by her "All-American dad," who tried to never miss a ball game. Honey Creek is where much of her tight-knit family is located and is adjacent to where she works in Jefferson City.

Chrisman is in her fifth year with the Jefferson City School District. She was brought on with the use of the "Healthy Schools, Healthy Communities" grant and worked at just four select schools in the district. When the grant came to an end, the district asked Chrisman to stay on in the role of Healthy Schools coordinator and work in all schools.

While Chrisman loves her job, it's not something she foresaw doing.

She graduated from Eugene High School, then went to William Woods University to obtain her degree in exercise science. From there, Chrisman set off for the distant coast of California, a move that baffled some in her family and even Chrisman herself.

"That was very tough on our family. Not everyone handled it well, but I still went, and I still don't even know why," she said.

Yet, she said, the move set in motion a series of events that brought her to where she is today.

Kelsey Chrisman always knew she wanted to move back some day, and after several years of working in California, they decided it was time.

"I told him it was good weather all year round in Missouri, and he believed me," she joked.

They headed for Honey Creek. Chad worked as a P.E. teacher in Eldon, and later the two launched Ignite Fitness and Performance, where Kelsey can be found when not at school, and where Chad works full-time.

When Kelsey moved back, she had no specific plans for a job until someone mentioned a position at the school.

"I just knew I was moving home, and then, bam! I kind of got dropped into this job and then just took off," she said.

Within a month of moving home, she was working in the district and finding out working with children is what she had really wanted to do all along.

Her day-to-day consists of planning and organizing events, along with interacting with students at school. She organizes before- and after-school activities like Girls on the Run, walking to school, cooking club, garden club and fitness club. She helps with classroom fitness by leading students through drills on speed ladders. She encourages competitions involving pedometers, where children track their steps and earn points toward prizes for being active during recess.

Her hope is her work at Jefferson City can become an example for other schools.

"I want JC Healthy Schools to aid in Jefferson City being a premier school district that people from all over the United States look at for what they're doing, and how they're doing it and the results that they're getting," she said.

Though a fitness buff, Chrisman has a weakness for Chinese buffets - she listed Dragon Kitchen as a favorite. She also loves to play and coach softball with family, use her recently acquired camper, and spend date nights with Chad eating dinner, watching movies or taking walks. They love to travel, and visit friends and family in California.

She said one of the things she's most proud of is the life she and Chad have built for Mateus, their 2-year-old.

She said she's found motivation in her faith, which has recently been "through the roof," and she's often inspired by progress, change, relationships and the desire to bring people together. She's also proud of her roots in Honey Creek and in her family.

As Kelsey Chrisman tells the story of how she got where she is, she marvels at the twists and turns that ultimately brought her home.

"Honey Creek is home," she said. "My mom said, 'Kelsey, you literally moved to the furthest place you could go in the United States,' excluding Alaska and Hawaii. The furthest place - and here I am."