Slaying of Chinese student in Chicago spurs call for action 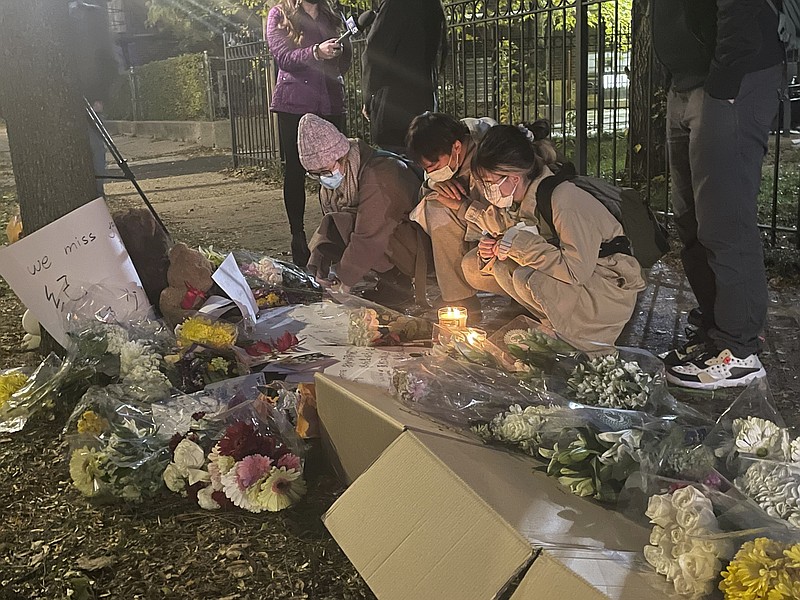 Students and friends of Shaoxiong "Dennis" Zheng stop by a memorial on Wednesday, Nov. 10, 2021 in Chicago. Police say Zheng was fatally shot while on the sidewalk shortly before 2 p.m. Tuesday. The slaying of the Chinese college student fatally shot during an armed robbery near the University of Chicago campus prompted the school's president to call for city officials to treat violence as a “public health crisis.” (Madeline Kenney/Chicago Sun-Times via AP)

CHICAGO (AP) — The University of Chicago’s president is urging city officials and police to treat Chicago’s rising violence as a “public health crisis” following the fatal shooting of a Chinese student during an armed robbery near campus.

Shaoxiong “Dennis” Zheng, 24, was standing on a sidewalk in a residential area Tuesday afternoon when witnesses said a gunman stepped from a car and Zheng appeared to struggle with the robber before a shot went off.

The assailant returned to the car and fled, and Zheng was pronounced dead at the University of Chicago Medical Center. No arrests have been made in the killing in the Hyde Park neighborhood on the city’s South Side.

University of Chicago President Paul Alivisatos said in a statement Wednesday expressing sadness over Zheng’s slaying that the university community and local residents “see a clear and urgent need to strengthen public safety.”

“The violence afflicting Chicago is on the same scale as a public health crisis and demands a commensurate response,” he said in the statement the school has been in contact with the mayor’s office, Chicago police, local alderman and others.

So far this year, there have been five slayings in Hyde Park, compared with none at the same time in 2020, as violence across Chicago has risen for two straight years, the Chicago Sun-Times reported.

Chicago has had at least 698 homicides this year, compared with 680 at the same time last year. That’s well above the 442 homicides that city had experienced by this point in 2019, the Sun-Times reported.

Mayor Lori Lightfoot promised Wednesday to meet with police and community leaders “to determine concrete, tangible measures (that) can be taken to prevent tragedies such as these in the future” but no specifics have yet been announced.

In January, Yiran Fan, a 30-year-old Ph.D. student who was a native of Beijing, was randomly killed while sitting in a car in a parking garage — the first of seven people, from Chicago to Evanston, shot by a gunman, police said. Fan and four other people died.

And in July, Max Lewis, 20, a third-year student who had just accepted an investment banking offer, was fatally shot by a stray bullet on the Chicago Transit Authority Green Line as he was riding home from his summer internship in downtown Chicago.

At the site where Zheng was shot, mourners have added flowers to a growing memorial to him.

During a Wednesday vigil there, Xi Cheng, who had known Zheng for six months, remembered him as a “really positive, nice person.” She said the two became friends after they connected online.

Cheng, 22, choked up as she recalled Zheng and his love for sports, especially table tennis, and photography.

“I can feel he loves Chicago so much,” Cheng said. “I can feel he really enjoyed here and loves this (city) so it’s really tragic to hear.”

The Chinese American Association of Greater Chicago has started an online memorial fundraiser to help cover travel and legal expenses for Zheng’s family.