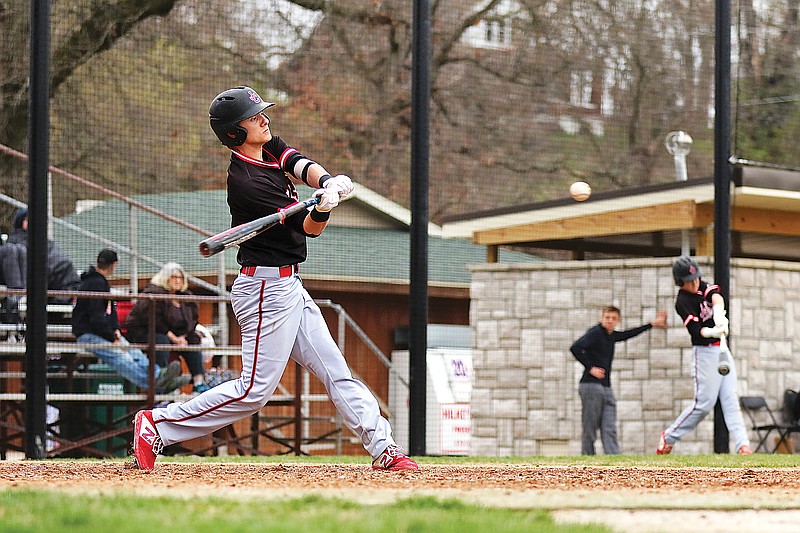 In this 2019 file photo, Wyatt Fischer of Jefferson City starts his swing during a game against Eureka in the Capital City Invitational at Vivion Field.

The Jefferson City Jays are itching to get back on the baseball diamond for varsity competition.

"The energy and the focus has just been all there every day," Jefferson City coach Kyle Lasley said as the Jays get set to open the season today at Kirksville. "And when you have 12 seniors, that helps out a lot."

Two of those seniors will lead the pitching staff: Jacob Roettgen and Wyatt Fischer.

Roettgen can bring some heat with a fastball close to 90 mph, but the lefty has an arsenal on the mound.

"Over the offseason he developed a little split-change, which I feel like is probably his best pitch," Lasley said. "He can throw it for a strike, he can locate it really well. And then obviously he throws a little curve, a little slider."

Fischer can throw in the mid-80s and add in solid offspeed pitches.

Case Hager, a junior, gives the Jays another lefty option.

"That kid just knows how to pitch. He's a competitor," Lasley said. "When he gets on a mound, he's in his own little world. He's a pitcher that can command, that could throw offspeed, that will hit spots, keeps the ball low in the zone."

Senior Joe Hoerchler returns behind the plate, while senior Nick Williams can split time at catcher and right field.

"My philosophy is if you can hit, we'll find you a spot," Lasley said of Williams. "He's kind of proven the last couple of years that he can kind of play that role."

Roettgen, Duke and Schmitz can all play first base.

At second base and leading off will be junior Connor Earleywine.

"He's just super fast, he won't strike out a lot," Lasley said. "He's a good bunter, has some pop in his bat too, so he can do a little bit of everything."

Parks moves from his usual spot at second base to third base, and senior Taylor Hopkins returns at shortstop.

Fischer will start in center field and the spot in left field is an open competition.

Pitching and defense have been the staples for the Jays, but how are the bats heading into the season?

"That was going to be kind of our thing is, are we going to be able to score runs?" Lasley said. " Based off of the Jamboree, I liked what I saw. I just think we've got a good mixture of guys with some pop, we've got some speed. Can we limit strikeouts? Can we put balls in play and use our speed on the bases? I think hitting-wise, it's gonna come around."

Jefferson City will then play Friday and Saturday in the St. Francis Borgia/Union Tournament.

The Jays Baseball Classic is slated to be played April 8-10.

The first Central Missouri Activities Conference game for Jefferson City is scheduled for April 13 against Battle.

"I think our conference is wide open," Lasley said of the CMAC that includes Jefferson City, Helias, Capital City, Sedalia Smith-Cotton, Rock Bridge, Hickman and Battle. "I wouldn't say there's a favorite or a top team, but I think we're right there."

There are a couple of changes to the postseason format in baseball this season. A sixth class will be added and each class will be divided into eight districts, meaning each district champion will advance to the state quarterfinals.

The district assignments will be announced at a later date.

"I have pretty high expectations for these guys and they know that," Lasley said. "I think that's why they play with a little bit of an edge in practice and even in the Jamboree. They have a goal and a plan in mind. I think it's probably the same as mine. But it's a process. It's a day to day process. We've got to keep guys healthy and we're hoping for a good season."