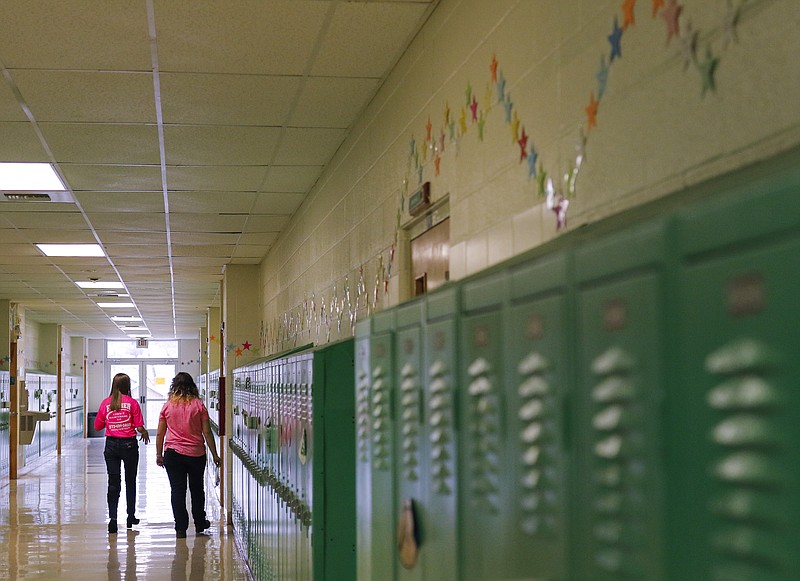 Blair Oaks junior Courtney Buscher and sophomore Emma Sandbothe walk down the halls of Blair Oaks High School on Friday, Feb. 26, 2021, making their way around the school to put up posters in preparation of the Random Acts of Kindness club's Anti-Bullying Week.

After being bullied time and time again, Blair Oaks High School students decided it was time to take a stand.

Blair Oaks High School had its first Stand up to Bullying Week from March 1-5, planned by students in the Random Acts of Kindness Club.

The students created posters, a video, dress-up days and a survey to raise awareness and stand up to bullying. They also made pink ribbons for each student, symbolizing a stand against bullying.

“Every bit of this has been planned by the students, and I am so proud of them,” said RAK Club Supervisor Annie King, who sponsored Stand Up to Bullying Week.

Next year, RAK Club plans to make Stand Up to Bullying Week a districtwide event.

Blair Oaks students decided to start Random Acts of Kindness Club this year because they were “fed up” with bullying, sophomore Emma Sandbothe said. After a student told her friends that somebody threw soda on her, they all decided to take a stand through kindness.

Sandbothe and junior Courtney Buschner said it was important for them to start Random Acts of Kindness Club and Stand up to Bullying Week because they have been victims of bullying.

The goal, Buschner said, is for people who have been bullied to know they have a voice and there are people they can go to.

“I feel like every person should have a voice and that if they’ve been bullied, they know they have somebody else they can come run to that’s not just parents, teachers, but they have other students that they can run to if they need somebody to talk to,” Buschner said.

Buschner said she has depression because she’s been bullied since kindergarten, and she wants people to know they’re not alone.

“I have tried to commit suicide because I didn’t know that there was another way, but I realized, thanks to my parents, that I do have a voice,” Buschner said. “I can be that voice for other kids. They just need to know that somebody else is out there.”

For Sandbothe, her anxiety and depression has worsened because of bullying. When she was in eighth grade, she was repeatedly called names.

“At one point, I even got hit in the face for a dare, and I went for help, and I didn’t get help,” she said.

By spreading kindness instead of hate, these students are using their voices and experiences to make a difference.

Brightly colored paper stars line the walls of Blair Oaks High School in a zig-zag pattern, each with an act of kindness written on it, such as “I made my best friend smile,” “I held the door open for a stranger” and “I helped my little brother do his homework.”

RAK Club members cut out the paper stars, and students can get them from King’s classroom to write an act of kindness on. RAK Club members then laminate the stars and hang them on the wall.

For Stand up to Bullying Week, they passed out stars to everyone to help reach the goal of lining stars around the entire school.

Students also had the opportunity to sign a poster that said, “We pledge to stand up to bullying,” and Sandbothe and Buschner hung signs across the school that will stay up throughout the rest of the school year.

The signs include ways to prevent bullying and support victims of bullying, such as shifting the focus and redirecting the bully away from the victim, not participating in any way, and telling an adult.

RAK Club members also created a video about bullying that played on FLCN News, a channel produced by Blair Oaks High School students that airs each morning at the school.

In the video, students describe and act out different types of bullying, including verbal, physical, emotional and cyber bullying.

“Bullying has many effects on the victims, such as depression, anxiety, self harm and suicidal thoughts that can end a victim’s life,” Sandbothe said in the video.

They also shared statistics from the survey to raise awareness. All Blair Oaks High School students had the opportunity to fill out the anonymous survey.

Some people said they didn’t think bullying was a prominent issue at Blair Oaks, so Sandbothe decided to send out a survey to get the facts.

“We’re hoping that the stats will surprise them and maybe they can think twice,” she said.

Wearing a pink shirt that says, “No More Bullying” surrounded by positive words such as “acceptance” and “kindness,” Sandbothe said she wants people to know they don’t have to put up with bullying, even if the bully says it’s a joke.

“If it’s repeated and you excessively say ‘stop,’ it’s not a joke,” she said. “And then you just fall into a dark hole, and you might not be able to climb out of it.”

Through kindness, difficult experiences and lots of hard work, these students are making a difference.

“If I can help one person, I’m happy,” Sandbothe said.