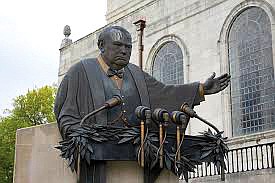 Discussions Friday of Winston Churchill's legacy looked just as much to the past as they did to the future.

"When Churchill spoke at Westminster College, he did something that great orators can do - implanted in the vocabulary of his era a phrase that caught the era's imagination, anxieties, puzzlements," said Will, a Pulitzer Prize-winning columnist for the Washington Post. "A phrase that riveted attention distilled into two two-syllable words the high stakes of the era's politics."

Churchill's description of a metaphorical "iron curtain" descending across Europe and dividing the areas under Soviet influence from the West announced the beginning of the Cold War.

"But part of Churchillian realism, which is my subject today, is the knowledge that nothing necessarily lasts," Will said. "Nothing. The only political things that last are the things that we work tirelessly to make permanent or to get rid of."

Churchill was honest, candid and forthright in his address, even though people often do not want realism.

"Reality, you see, can be distressing and demanding and dangerous," Will said. "So at Fulton, Churchill did what real political leaders do not flinch from doing. He said something that his audience, which actually was the entire American nation, did not want to hear."

Will said the world needed the United States in 1946 to repair Europe's shattered nations.

"It simply is not possible for the United States to be merely what (John Quincy) Adams called 'the well-wishers of those who are longing for freedom,'" Will said. "It is not possible because our national premise is that the principles by which we live and that we espouse are explicitly universal."

"On the one hand, we are a nation of immigrants," Will said. "We are all descended from people who came here to get away from there - wherever there was - from places too entangled with wars and revolutions. So America's instinct of isolationism sleeps lightly when it sleeps at all.

"On the other hand, we are a credal nation whose creed impels us to lean into the world in a way that Churchill encouraged."

Will praised U.S. actions in promoting global security and trade.

"The United States, or as Churchill liked to call us, the Great Republic, was weary but rose to the challenge that he issued at Westminster College three-quarters of a century ago," Will said.

"Were Churchill to return to Fulton today, he would, I am confident, say something like this: There is a democracy recession underway around the world. There are two authoritarian regimes, Poland and Hungary, currently blemishes on whole Europe," Will said. "In Asia, in the world's most populous nation, the regime is using sinister applications of science and technology to impose a totalitarianism even more suffocating than those that flourished in the 20th century."

He drew attention to a line from the "Sinews of Peace" speech.

"There never was a war in all history easier to prevent by timely action than the one which has just desolated great areas of the globe," Churchill said in the address.

Churchill believed foresight could have prevented the war.

"What prevents timely action is unrealism, the human tendency to flinch from unpleasant facts," Will said.