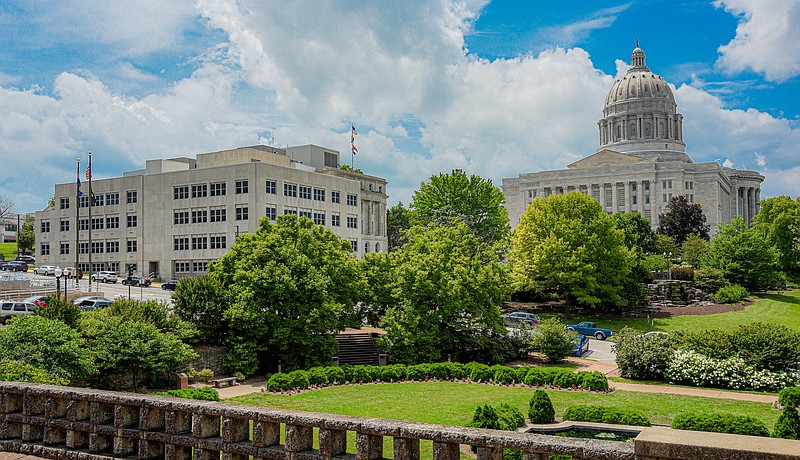 MoDOT Headquarters, seen at left, and the Capitol could benefit from a fund started under Sen. Mike Bernskoetter's SB 36 which establishes the Capitol Complex tax credit. The bill allows for a state income tax credit of 50 percent of the monetary donation a Missouri taxpayer contributes to the Capitol Complex Fund. The tax credit is capped at $10 million and can be used against taxes for financial institutions as well.

State Sen. Mike Bernskoetter, R-Jefferson City, introduced SB 36 to establish a tax credit for donations going to the renovation and rehabilitation of five buildings in the Capitol Complex.

"I'm happy to see it finally get across the finish line," Bernskoetter said.

The new law provides a state income tax credit of 50 percent of the monetary donation a Missouri taxpayer contributes to the Capitol Complex Fund. The tax credit is capped at $10 million and can be used against taxes for financial institutions. It has a sunset of Aug. 28, 2027.

It also creates two accounts within the fund: a maintenance account receiving 7.5 percent of funds and a rehabilitation and renovation account getting 90 percent of the funds. The remaining 2.5 percent is to be used for fundraising, advertising and administrative costs.

The funds are specifically earmarked for projects at five historic state buildings in Jefferson City, including the Capitol, the Governor's Mansion, the Supreme Court building, the Old Federal Courthouse and the Highway building.

"This a huge win, not just for Jefferson City, but Missouri as a whole," Bernskoetter said in a news release. "These buildings are treasures of our state, but if we expect them to stay that way, they need our support now. This legislation will help encourage private donations to maintain these historic structures, all while reducing some of the cost to the state. I'm honored to see the governor sign SB 36 into law today and begin the important work of preserving these buildings for generations of Missourians to enjoy."

Bernskoetter has introduced the legislation every year since he was elected to the Missouri Senate in 2018, but said similar legislation has been around before he took it up.

He said the bill had a number of proponents, including the Missouri Chamber of Commerce and first lady Teresa Parson.

"Hopefully we have a lot of interest in the tax credit and we make it easier to maintain the buildings instead of always going through the budget process to get money into the maintenance of all these buildings," Bernskoetter said.

State Rep. Dave Griffith, R-Jefferson City, handled the legislation in the House as he has done for the last three years. Griffith said he worked with Bernskoetter to make the legislation appealing to not only potential donors, but also other lawmakers to get the necessary votes.

"When I testified for it, I said not all tax credits are created equal and there are some that are really good," Griffith said. "This is one that really will benefit not only Jefferson City but benefit the entire state of Missouri."

Griffith said he hopes building up the Capitol Complex Fund with the addition of a tax credit allows the state to make more renovations without borrowing money or using as many taxpayer dollars.

He said he is confident the tax credit will help bring in donations to the Capitol Complex Fund as corporations have previously expressed an unwillingness to make donations without an incentive.

In addition to monetary donations, Griffith said, donors can contribute artifacts that are historic to Missouri to qualify for a tax credit.

Bernskoetter said he hopes some of the money can go to smaller improvement projects that get continually overlooked.

Parson signed six other pieces of legislation into law Tuesday. The new laws address a variety of topics, from funding nonprofits working to reduce offenses in the state's high crime areas to preventing the Missouri Lottery Commission from publishing the names of winners without written consent.